Shinji Yamashita at Fujitsu Laboratories has received the "Outstanding Technical Contributor Award" from ONF (Open Networking Foundation) for his outstanding technical contributions on the extension of OpenFlow™ for optical transport. This was developed by Fujitsu and its subsidiaries, Fujitsu Laboratories and Fujitsu Network Communications.

ONF is one of the world’s leading organizations developing standards for SDN (Software-Defined Networking). ONF introduced OpenFlow™ technology and it is one of the major SDN technologies.

As well as his technical contribution to OpenFlow™, Shinji Yamashita also supported the joint OIF (Optical Internetworking Forum) and ONF demonstration of the transport SDN. This activity contributed to this award.

This is the first time ONF has awarded this accolade to Japanese SDN experts. 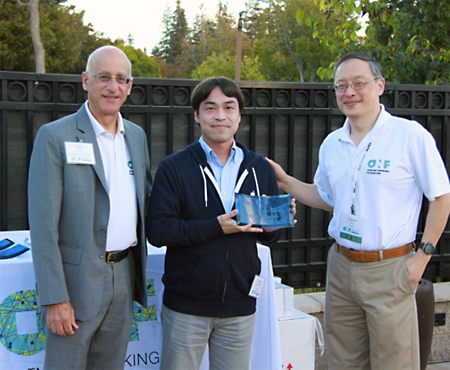