In recent years, with various systems and online services expanding and growing, the number of IDs and passwords required for login is increasing. The harm from illegal access virus infections, and identity theft due to sharing of passwords and phishing, is becoming a major threat. To counter such attacks, passwords, companies are asking users to make passwords more secure which in turn makes them more complicated for the user to remember. This makes it harder and harder to provide compatibility in convenience and safety for online services. To help solve this dilemma, companies are focusing on delivering authentication systems that do not rely on passwords but rather delivering an easy-to-use solution for secure access to online services. This release focuses on making "PalmSecure F Series" compatible with FIDO. To do this, Fujitsu Frontech developed authentication software that complies with FIDO UAF and FIDO2, the international standards for achieving safe online authentication, acquiring certification from FIDO Alliance(*5). Because of this new feature, for the first time ever anywhere in the world, people will be able to eliminate passwords, and use vein pattern FIDO services in a Windows environment in a way that combines greater ease-of-use and stronger safety.
Until now, biometric authentication devices, such as fingerprint, iris and face ones have been used with FIDO, but now "PalmSecure F Series" is available as a new authenticator, enabling more accurate authentication. 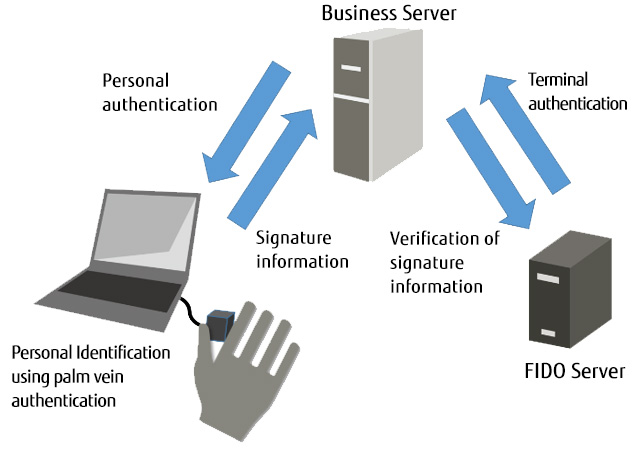