Kawasaki, Japan, March 12 , 2010- Fujitsu Optical Components Limited today announced that it will be releasing on May 1, 2010 a compact integrated DP-QPSK ( *1) receiver that supports 100Gbps digital coherent receiving systems ( *2). This product incorporates PLC ( *3) and micro-assembly technologies to allow the integration of 90° Hybrids ( *4), Balanced Receivers ( *5) , and Polarizing Beam Splitters all into a single package. The Fujitsu 100 Gbps DP-QPSK receiver is a sophisticated integrated receiver that is both compact and inexpensive. This product will help facilitate the production of compact, low-cost, high-performance 100 Gbps optical network systems. 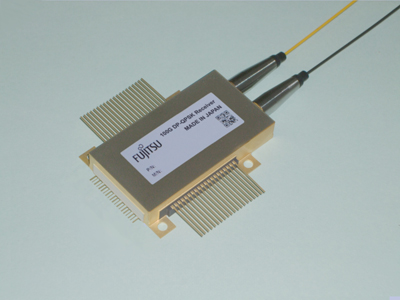 The rapid increase in the volume of communications traffic that has resulted from the spread of new services such as cloud computing and on-line streaming in recent years has created demand to put the research and development that has gone into 100Gbps optical networks into practical use.

Various encoding systems have been studied for 100Gbps optical transmission signals. DP-QPSK is a phase-modulation system that transmits 2-bit signals represented by four phases on two orthogonally polarized light beams respectively. The DP-QPSK signaling scheme reduces the effective symbol rate to one quarter of the system bit rate. This lowered symbol rate permits the use of electrical and optical components with lower operating bandwidths and improves the system immunity to factors that significantly limit transmission (i.e.- chromatic dispersion ( *6) /polarization mode dispersion ( *7)). DP-QPSK systems are widely recognized as being the leading-edge technology on the market today.

Significant research and development in recent years has also been conducted into digital coherent receiving technology. Systems using this technology utilize digital signal processing techniques to compensate for waveform distortion in the transmission path. This allows for optical dispersion compensators and optical amplifiers for loss compensation in the system to be eliminated thus greatly reducing the system cost.

1. Built-in polarization separation function
DP-QPSK receivers are required to separate two orthogonally polarized light signals at their input. Conventional versions of these receivers typically use an external polarizing beam splitter which is connected to the receiver via optical fibers to perform this function. This external polarizing beam splitter approach has the disadvantage of requiring that the length of the optical fibers that carry each of the polarized light signals must be very accurately adjusted. These optical fibers are also difficult to route inside of the transponder. To overcome these problems, Fujitsu Optical Components Limited optimized the design of the optical connection between the polarization separation element and the PLC chip. This was achieved by making use of Fujitsu proprietary micro-assembly technology that enables the polarizing beam splitter to be built into the DP-QPSK receiver itself. This technology also provides the added advantage of being able to greatly reduce the total area occupied by the polarizing beam splitter inside of the transponder

2. Compact single chip optical hybrid circuit by PLC technology
DP-QPSK receivers require 90° Hybrids for each of the two orthogonally polarized input light signals. Conventional free-space optical hybrid designs require a large number of optical elements resulting in large size and complicated alignment procedures. The Fujitsu DP-QPSK receiver makes use of PLC technology to integrate the two 90° Hybrids into a single compact chip. The single chip PLC design for the hybrids enables the overall size of the receiver to be greatly reduced from what could be achieved from the free space optics approach. The PLC hybrids are manufactured using a method similar to the semiconductor wafer process. The PLC design therefore also offers the added advantage of lowered costs and a high level of mass-productivity.

3. Compliance with OIF standard
The package dimensions, electro-optical characteristics, and the DC and RF pin outs of the DP-QPSK receiver conform to those specified by the OIF. This compliance allows the receiver to be mounted in any transponder designed to use OIF standardized receivers.

Fujitsu Optical Components Limited plans to display samples of this product at OFC/NFOEC 2010, which is scheduled to take place from March 23 to 25 in San Diego, California, USA.

(*1) DP-QPSK
Acronym for Dual-Polarization Quadrature Phase Shift Keying. It is a method of phase modulation for digital signals, in which 2 bits of data are allocated to each of 4 modulated optical phases (0°, 90°, 180° and 270°) for both P-polarized and S-polarized light.

(*3) PLC
Acronym for Planar Lightwave Circuit. Optical circuit chip on a silicon or quartz substrate containing optical waveguides with accuracies on the order of an optical wavelength

(*4) 90° Hybrid
Optical mixer component that is used for coherent signal demodulation purposes in heterodyne and intradyne detection systems. The hybrid mixes the incoming optical data signal with light from an input optical reference source and guides the combined signal to the balanced receivers.

(*5) Balanced Receiver
A receiver consisting of two photodiodes which receives differential optical output from delay line interferometers and 90° Hybrids. Improved receiver characteristics are achieved by using the difference between the two photodiode currents.

(*8) OIF
Acronym for Optical Internetworking Forum. The OIF is an organization that promotes standardization for the interfaces between IP routers in data networks and WDM (Wavelength Division Multiplexing) equipment in optical networks.

Aiming to strengthen Fujitsu's optical module business, Fujitsu Optical Components was established on April 1st, 2009 as a wholly owned subsidiary of Fujitsu Limited. With the establishment of the new company, the sales, research and development, and manufacturing functions of Fujitsu's optical module business are integrated under a unified management structure. Headquartered in Kawasaki, Japan, Fujitsu Optical Components is a leading supplier of the most advanced, high-reliable and customer-focused optical components for datacom and telecommunications applications in the global market. Its broad products line-up includes DWDM pluggable transceivers, full-band tunable 300pin transponders, G-PON transceivers and 40G/100G components. For additional information, visit http://www.fujitsu.com/jp/foc/en/.