Tokyo and Jakarta, Maret 09, 2016 – Fujitsu Limited and PT. Fujitsu Indonesia today announced that they have built a river information system that incorporates augmented reality (AR) (*1) technology for Manado, North Sulawesi, Indonesia. Fujitsu built the system at the request of the Japan International Cooperation Agency (JICA) Indonesia Office, and together with the North Sulawesi province River Basin Organization Sulawesi I, Ministry of Public Works and Housing (PU-PERA BWS Sulawesi I), are from February 23 to March 18 conducting a field trial to evaluate its usability and effectiveness.

The system was jointly built by Fujitsu and Fujitsu Indonesia, using Fujitsu’s expertise and experience from developing river information systems in Japan. In the system, observers can use a smartphone water-level measurement application to measure water levels, take photos, and add information on conditions in their surrounding areas. These data are accumulated and consolidated in a Fujitsu datacenter, and then changes in water levels at multiple measurement locations can be visualized in graphs and plotted on a map. Fujitsu’s integrated AR platform product, FUJITSU Software Interstage AR Processing Server, is used to run the smartphone app. Observers will use the smartphone's camera to read AR markers placed in the river basin within Manado. The app displays a scale superimposed on the image of the river, and just by tapping the water’s on-screen surface, observers can digitally measure water level.

In the current field trial, an AR marker was installed in one location in the river basin in Manado, to test whether accurate information useful in disaster prevention can be gathered. Testing is also being carried out to verify whether PU-PERA BWS Sulawesi I's quickly recording and sharing changes in the river’s water level through this system enables effective condition assessment for river management.

Manado, which faces the sea, has four medium-sized rivers flowing through it and is vulnerable to large disasters, such as flash floods and river flooding due to heavy rain, as happened in January 2014, when large-scale flooding and landslides claimed a number of lives. Victims of flooding are common, not only in Manado, but across Indonesia, so the monitoring of river water levels, the rapid sharing of information by local government workers when water levels reach flood-warning levels, and providing residents with rapid and accurate evacuation instructions have become topics of interest.

Systems that install outdoor sensors to monitor river water levels have installation maintenance costs that make them difficult to use in Indonesia on an ongoing basis. The JICA Indonesia Office felt that if there was a system that used smartphones to keep implementation costs low, where anyone could take standardized measurements from a location safely far from the river through AR technology, then that system would have a high probability of being used sustainably even in Indonesia. It was therefore decided to conduct this trial.

Fujitsu is handling the management of this operational trial project as a whole and developing the application and building the system, while Fujitsu Indonesia is primarily supporting system building, training the staff of PU-PERA BWS Sulawesi I, and supporting the operational trial.

PU-PERA BWS Sulawesi I is measuring the river water level with the smartphone app, and monitoring river water levels. If the water level reaches flood-warning levels, they will report to Manado's municipal workers with early evacuation instructions.

Employees of PU-PERA BWS Sulawesi I responsible for monitoring river water levels are sending in water levels, photos, and comments that relay the state of water-level increases with the smartphone application every day, three times per day. They are able to measure the water levels safely using their camera’s zoom function to take their measurements at some distance from the river. They can provide accurate observations because they can tap the on-screen surface of the water to fix the scale, which generates digital values. 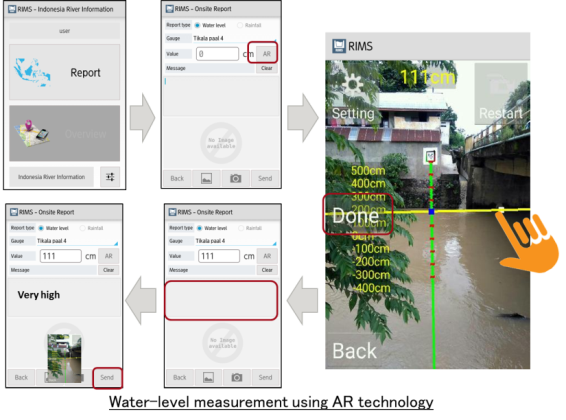 PU-PERA BWS Sulawesi I employees responsible for managing the river check the water level and its changes via the Internet three times per day. With this system, measured water levels, on-site photographs, and comments from those responsible for taking measurements are collected, and the changes in water level at the location are graphed. If the water reaches flood-warning levels, the system displays an alarm. In this trial, alarms are only being displayed on-screen, but it is also possible to send alarm messages to the mobile phones of local government disaster prevention and mitigation workers.

The JICA Indonesia Office expects that, because employees of PU-PERA BWS Sulawesi I can check this information via Internet-connected computers and smart devices, they can obtain reliable river data, which will be useful in issuing early evacuation orders to prepare for a flood. 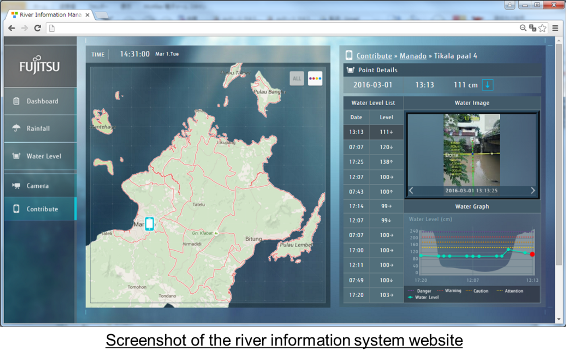 In the current trial, the river information collected by this system is only being shared with the employees of PU-PERA BWS Sulawesi I. If this trial shows the system to be effective, however, and it is fully implemented in Manado by making this information public, it may also be useful in residents’ voluntary, autonomous disaster prevention and mitigation activities.

Furthermore, going forward, by continuing to accumulate information in the datacenter for a number of years, it will become possible to use big data analysis, which may be useful in disaster prediction or reinforcement and repair planning for the rivers.

Fujitsu and Fujitsu Indonesia will put together a trial-results report about the effectiveness and results of this system, which will be presented to the JICA Indonesia Office at the end of March 2016.

1. AR Technology: Short for augmented reality. AR technology combines information from human senses (the five senses) with digital information gained through the use of ICT to expand and strengthen human perception.

Fujitsu is the leading Japanese information and communication technology (ICT) company, offering a full range of technology products, solutions, and services. Approximately 159,000 Fujitsu people support customers in more than 100 countries. We use our experience and the power of ICT to shape the future of society with our customers. Fujitsu Limited (TSE: 6702) reported consolidated revenues of 4.8 trillion yen (US$40 billion) for the fiscal year ended March 31, 2015. For more information, please see http://www.fujitsu.com

PT. Fujitsu Indonesia was established in 1995 by the name of PT Fujitsu Systems Indonesia. Headquartered in Jakarta with service points in big cities such as Jakarta, Surabaya and more 75 authorize service providers across Indonesia. Fujitsu Indonesia has a vision to be a leading customer-focused Information and Communication Technology (ICT) solutions provider in Indonesia. Fujitsu offers one-stop end-to-end solutions, covering from high-quality PCs to mission-critical Servers, business and manufacturing applications and ICT infrastructure. Customer portfolio of Fujitsu Indonesia spans across various industries and segments such as government, manufacturing, retail, oil & gas as well as telecommunication, including the largest telecommunication and manufacturing companies in Indonesia.

Certified to ISO 9001:2008, PT. Fujitsu Indonesia implements a quality management system that is registered to the international standards for the scope of ICT solutions and services. ISO 9001:2008 promotes the adoption of a process approach when developing, implementing, and improving the effectiveness of a quality management system, to enhance customer satisfaction by meeting customer requirements. For more information, please visit: http://www.fujitsu.com/id