Contributing to business results with performance above and beyond expectations: Mizuho Bank is using "aggressive IT" with the power of a SPARC Solaris Cloud infrastructure

Mizuho Bank, a leading financial institution in Japan, is widely considered to be progressive in the implementation of Information Technology (IT), thanks in part to their use of Artificial Intelligence (AI) in their call centers and the introduction of Pepper the robot to their branches. Aware of the importance of the IT infrastructure, Mizuho Bank has focused on developing a group-wide private "Mizuho Cloud" that includes their mission-critical systems. Mizuho Bank knew that the stability of service would require high-performance servers.

In this day and age, IT departments must contribute to the businesses bottom line. With the recent advancements of enterprise IT and the significant change in the role of IT departments, contribution to business and management in the form of "aggressive IT" has become expected across all industries.

"IT system departments can contribute to business," says Masahiko Katou, General Manager of Planning and Control of IT Division I, who is responsible for managing the domestic core business systems. He is moving forward with the implementation of cloud computing within Mizuho Bank.

Mizuho Bank has developed the private Mizuho Cloud to be shared by the members of the Mizuho Financial Group and reduce the costs of maintaining their fully-customized and optimized systems, as well as to improve operational efficiencies. Over the last six years, step by step, Mizuho Bank has migrated multiple banking business systems to the cloud in order to bring virtualization and consolidation of systems to a final stage.

Evolution of the Mizuho Cloud through generations of system infrastructure

"At Mizuho Bank, we are striving to restructure systems to include next-generation core-banking systems. We have established individual infrastructures for our accounting and payment systems, such as those for deposits, domestic exchange, financing, and foreign exchange. For other systems, we have begun to consolidate them on to the Mizuho Cloud according to the characteristics of each system. As cloud technology has developed, we have considered the feasibility of introducing cloud computing in terms of agility, effectiveness,availability, security, and technology" explained Mr. Katou.

Availability and security are the biggest challenges for banks when it comes to the operation of mission-critical systems in the cloud, and Mizuho Bank decided that a private cloud would be the best solution. To maintain availability and security throughout the project, the Mizuho Cloud project was deployed in two phases. In the first phase, Mizuho Bank implemented server virtualization in order to consolidate servers. In the second phase, they went further by consolidating more workloads onto the server infrastructure and drastically improved system utilization. 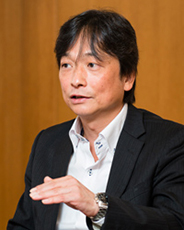 In March 2015, Mizuho Bank moved production on to Solaris systems in their cloud, with migration occurring system by system as a part of an overall infrastructure refresh. Mizuho Bank had already introduced physical servers running Solaris for trading systems and core-banking systems. The final step was the migration of these systems to the newly established Solaris cloud infrastructure.

At present, the Mizuho Solaris cloud infrastructure includes server hardware products from multiple vendors. Of these, Mizuho Bank has chosen to implement the Fujitsu M10 SPARC server family for tasks with the highest performance requirements.

"For example, we use them in the trading system's risk management system for asset allocation (diversification) to reduce investment risk and improve returns. We analyze risks by gathering a massive amount of transaction data from the market and perform statistical simulations and stress tests based on various scenarios. This risk management system analyzes Big Data and is an important element of marketing as well. Calculations used for marketing take a significant amount of time and put extremely heavy load on servers. Fujitsu M10 SPARC servers, with their solid processing performance, were ideal for high-speed processing like this," says Mr. Katou. 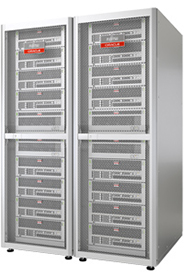 "In the past, we chose server models based on the scalability required for the business growth we expected in the next five years. But things change so suddenly and drastically these days that it is challenging to predict what could happen in five years. What will happen in the coming year, however, we can clearly predict. Fujitsu M10 servers are suitable because they allow us to control resources flexibly in accordance with business growth. We have achieved cost reductions of around 70% so far, and we expect even greater results by continuing the migration of other systems to the cloud and improving the consolidation ratio," explains Mr. Katou. 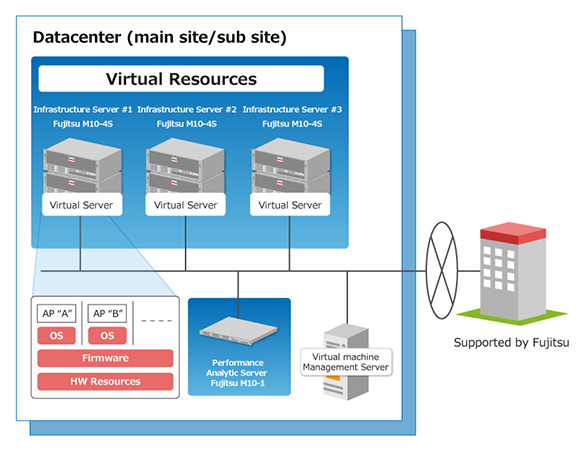 Contribution to business through standardization by the IT department

Cost reduction was not brought about only by the evolution of technology. In the past six years after Mizuho Cloud project had started, Mizuho Bank had set a goal each year to reduce cost by focusing on one area for standardization. Standardization such as infrastructure design has resulted in significant cost reduction.

"The effect of IT infrastructure may not be apparent at first glance, but the IT department, with their wisdom and innovative ideas, contributes to the business significantly. We continue to study technology evolution and standardization every day. Thanks to these efforts, we can work on new IT strategies, such as the Mizuho Cloud," says Mr. Katou.

In addition to the cost reduction, Mr. Katou is amazed by the results that were achieved by the introduction of Fujitsu M10 servers. Mr. Katou says "The team members in the field have reported that the processing speed is faster than they had anticipated, and I expect that the servers will demonstrate tremendous power for our systems, especially batch processing workloads."

It took a little over a year to implement the Fujitsu M10 servers. This is very fast for systems in a bank, and it is a testament to the strong support from Fujitsu.

Mr. Katou explains, "At Fujitsu Trusted Cloud Square in Hamamatsu-cho in Tokyo, they prepared a demo environment for us, and we were able to experience and test before our implementation. This took us a big step forward in the implementation process, because we could test the performance of the hardware and the effects of introducing a new platform in an environment that was very close to our production environment. The test took a little over a month, and then we started deployment. From that point it was roughly a year until we released the environment for production."

Group-wide utilization of the Mizuho Cloud

With the Solaris cloud infrastructure in place as the foundation of the Mizuho Cloud, the goal is now complete stability.

"Of course we have worked long and hard on the stabilization of our system infrastructure. However, with the Mizuho Cloud the circumstances are different because one problem may affect multiple systems. Therefore, we have strengthened operation-related support by shortening the time required to solve problems. The support of Fujitsu is very strong when a problem occurs, and the sense of security means a lot to Mizuho," adds Mr. Katou.

Mizuho Bank is keeping the goals of "inter-group utilization of the Mizuho Cloud" and "Hybrid Cloud" in sight as plans for the near future.

"Although Mizuho Bank is currently the focus of the Mizuho Cloud, we are going to introduce it to our group companies in order to make the Mizuho Cloud a group-wide infrastructure in the Mizuho Financial Group. We always need to think about new infrastructure concepts to accommodate expansion. Compared to six years ago, the environments that involve a public cloud have changed significantly. Mizuho Cloud may migrate from a private cloud to a hybrid cloud approach in the future, with both private and public cloud service offerings available for specific purposes. In addition, new IT innovations such as FinTech are drawing attention within the financial industry. For these exciting new projects, we would be happy to work with Fujitsu," says Mr. Katou.

Mizuho Bank is considered in the industry to be progressive in the implementation of IT. Mizuho Bank, with its policy of contribution to business through IT, offers much to learn for the creators of information systems for the future.
*At the time of the interview, Mr.Katou's job title was General Manager, Planning and Control of IT Division I

Mizuho Bank is using "aggressive IT" with the power of a SPARC Solaris Cloud infrastructure
by ITmedia Enterprise
Japanese version at: http://www.itmedia.co.jp/enterprise/articles/1512/10/news018.html