By choosing the Fujitsu M10 as the server platform on which to operate its smartphone business, KDDI achieved a five-fold increase in the speed of in-memory database processing

"An in-memory database for high-speed processing is essential to our business. Because this means we need a large amount of memory, the Fujitsu M10 was attractive to us for being able to deliver a large memory capacity at a comparatively low cost."

As a major telecommunications company making major strides both in Japan domestically and overseas, and with approximately 42 million subscribers, KDDI Corporation places a particular focus on providing content and other services for increasingly popular smartphones and tablets. A feature of many of these services is that they are available to subscribers whenever they want to use or view them, 24 hours a day, 365 days a year. To increase the number of users and views, KDDI has already introduced offers such as "App Torihodai" (all the apps you can use) as a part of its "au Smart Pass" fixed-price app service, a first for Japan.

Among the system platforms that underpin KDDI's business model is the Session Management System that began operation in 2011. The purpose of this system is to check device session information against subscriber contract status in realtime to verify that someone attempting to use a service is the genuine subscriber. By eliminating the risk of device spoofing, the system provides a wide variety of services that are tailored to the verified subscriber.

Toshio Kato, General Manager, Evolved Packet Core Network Development Department, Network Technical Development Division, Technology Sector, KDDI, explains the importance of the system as follows. "The system is essential to services that handle subscriber and contract information in realtime. If the system became unavailable, subscribers would no longer be able to access services whenever they wanted, and we would face a business risk due to the loss of opportunity."

Content and other services have increased at KDDI. Original expectations were surpassed with the explosive growth of applications such as games that initiate frequent communications in the background. In spite of the fact that the initial system was designed and built with sufficient margin for growth, there was forewarning of insufficient capacity a year after the initial system began operation.

"Although we adopted an in-memory database solution (a database that holds data in the server's main memory) as a way of improving response times, we were unable to keep up with the dramatic rise in the number of transactions per second," notes Dr. Kato. It became clear that processor and server capacity would need to be increased if response times were to be kept within a range acceptable to our users.

In response, KDDI established a team to work on the problem in October 2012. They produced a list of the requirements for a request for proposals from a number of system integration companies.
Tetsuya Enoki , Evolved Packet Core Network Development Department, Network Technical Development Division, Technology Sector, KDDI, recalls how, "The requirements fell into three main categories, namely [1] a five-fold improvement in performance over the existing system, [2] the provision for further scalability on top of the five-fold performance improvement, and [3] maintenance of business continuity by establishing a backup site for disaster recovery. The aim was to create a system that could keep up with anticipated future user growth."

Setting the high target of a five-fold improvement in performance was motivated by the rapid growth in the number of smartphone subscribers. Despite this ambitious target, Dr. Kato says, "This was when the Fujitsu M10 had just been introduced, and we knew that the SPARC64 processors used in the servers had evolved over many years. We believed that we could obtain even higher levels of performance by using Fujitsu M10 SPARC servers." 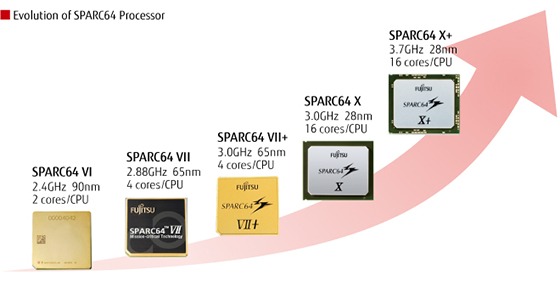 Fujitsu processor design team has been working on performance and reliability improvements and innovations over many years. The SPARC64 X and SPARC64 X+ processors used in the Fujitsu M10 represent the leading edge of this process.

Regarding scalability, particular importance was placed on the ability to expand the system capacity without stopping the IT resources on the server, even after the system started production operations. As Mr. Enoki explains, "Although designing and building a new system with five times the performance of the old one represented a realistic goal, recognizing the potential for demand growth to exceed expectations, we sought to select a platform that would also be capable of further expansion."

KDDI's aim with building in redundancy by establishing a backup site for disaster recovery was to ensure that the Session Management System could continue to operate even in the event of a major disaster. This required establishing two systems with a master/backup configuration located several hundred or more kilometers apart, and with a synchronization capability that could maintain data consistency between the respective databases. Unfortunately, the delays in exchanging data over the network that arise when sites are physically distant from each other also mean that there is a risk of the master and backup databases not being updated simultaneously. Another possible risk if database updates take too long is the loss of consistency during the switch between master and backup copies of the databases when a disaster strikes. Accordingly, the requirements for the second-generation system included the ability to synchronize databases located several hundred kilometers apart in realtime and without loss of data. 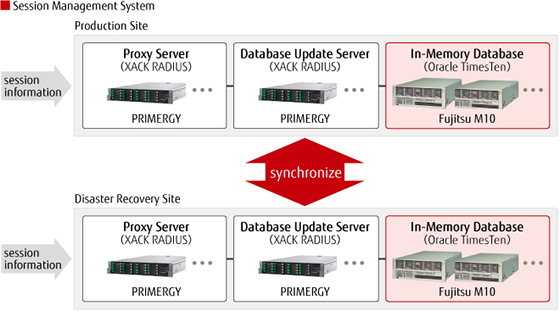 The Fujitsu M10 based Session Management System can respond rapidly to subscriber information requests from update/reference servers using its in-memory database. The system was designed with a backup site for disaster recovery located several hundred or more kilometers away to ensure business continuity in the event of a major disaster.