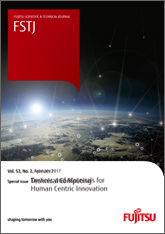 In this special issue, we introduce Nobel Prize research by members of the Institute for Cosmic Ray Research, the University of Tokyo, and present special contributions on advanced scientific topics by members of the National Astronomical Observatory of Japan and Japan Aerospace Exploration Agency (JAXA). And we also introduce solutions that support state-of-the-art science together with case studies in various fields.

Fujitsu's Technologies and Systems for Orbit Determination, Prediction, and Analysis (732 KB)
Seiji Katagiri, Chiaki Aoshima, Takafumi Ohnishi, Yosuke Yamamoto, pp.24-31
Advancements in space technologies have led to a broadening in the scope of exploration missions and in the operations of artificial satellites. Satellites now require precise orbit determination, prediction, and analysis using flight dynamics technologies, and the requirements for these technologies are becoming more and more complex, sophisticated, and diverse. Fujitsu has long participated in Japan's space exploration program and has made contributions to the development of orbital dynamics calculation systems for satellite operations. Our efforts continue today as we develop various systems such as orbit determination/prediction systems for reliably locating and tracking satellites and systems for precisely determining the orbits of space probes more than 400 million km from Earth. This paper presents the technologies and systems we have developed for determining, predicting, and analyzing the orbits of artificial satellites and space probes. The paper also describes relevant case studies and mentions the latest trends.

Solutions to Social Problems Leveraging Image Analysis Technology based on Machine Learning (1.16 MB )
Dai Osabe, Yuusuke Iitsuka, Akihiro Higashi, pp.32-38
Increasing attention is being given to the application of machine learning such as deep learning to image analysis. Aiming to provide a solution to social issues in urban areas, we focused on traffic and security and developed systems for parking analysis (detecting the availability of parking spaces) and citywide surveillance (person/vehicle recognition). The former is called FUJITSU Technical Computing Solution GREENAGES Parking Analysis (hereafter, Parking Analysis), and the latter is called FUJITSU Technical Computing Solution GREENAGES Citywide Surveillance (hereafter, Citywide Surveillance). Parking Analysis detects vacant parking spaces, providing users with real-time information on available parking spaces in their destination areas. The data also enable owners of parking lots to enhance operational efficiency based on data analysis. Citywide Surveillance automatically detects unusual events by monitoring images in real time. In addition, the image archive can be searched to accurately extract images related to given keywords. This functionality serves as an added value for reducing the workload required for surveillance and investigation. This paper explains the technologies applied in these solutions, and describes their vertically integrated configuration including infrastructure and services, as well as the contexts in which they are leveraged.

Super-Kamioka Computer System for Analysis (549 KB)
Hideyuki Okada, Yukinobu Oyama, Tomohiro Tsukahara, pp.39-44
The Institute for Cosmic Ray Research, the University of Tokyo, is observing supernova, solar, and atmospheric neutrinos, while researching the Grand Unified Theory, using the Super-Kamiokande detector. This large-scale observation detector was constructed 1,000 m below ground level and has a water tank (41.4 m in height, 39.3 m in diameter) capable of storing 50,000 tons of ultrapure water. There are 11,129 photomultiplier tubes (each 50 cm in diameter) mounted on the tank wall. The Super-Kamiokande detector can generate approximately 45 TB of observed data per day, of which approximately 500 GB is saved after noise is removed. The total amount of data stored on the disks is nearly 3 PB, including user information. The Super-Kamiokande detector is used to observe natural phenomena, and the challenge for Fujitsu is to ensure that accurate observed data are captured 24/7 and to store them over a long period of time. In February 2012, Fujitsu installed the Super-Kamioka Computer System for analysis designed to facilitate the storage of a huge volume of data on a large-capacity disk so that the data can be quickly accessed and to provide safe and long-term data storage. This paper explains the system's various innovations that enable accurate capturing of observed data, high-speed processing, and long-term archiving.

Achievements of Space Debris Observation (1.24 MB )
Gaku Adachi, Takafumi Ohnishi, Masaya Kameyama, pp.45-52
Over the years, Fujitsu has been working with the Japan Aerospace Exploration Agency (JAXA) to develop and operate JAXA's system for observing space debris, and helping with its data processing and orbit analysis. There is a risk that space debris could collide with artificial satellites or hit the Earth's ground. Thus, JAXA has been tracking the orbital courses of debris using data from optical telescopes and radar observatories. Furthermore, the orbital data are used to monitor pieces of debris that approach satellites, and to calculate their re-entry into the atmosphere. Fujitsu has been supporting this endeavor through technological engineering and system development. We have developed a high-precision orbit calculation technology to track pieces of orbiting debris, monitor their approach to satellites, and provide analysis and forecast their re-entry into the atmosphere. Also, with enhanced space debris observation and technology to optimize observation plans, we have succeeded in making orbit tracking more efficient with fewer ground stations. As for the system development, we have striven to ensure higher computational accuracy in orbit calculation and analysis, developing a parallel computation system and automation in order to process a vast amount of data in a short time. This paper explains the structure and features of this system, developed for managing and analyzing space debris. It also describes the specific technologies applied in major observational tasks, and their results.

AMeDAS: Supporting Mitigation and Minimization of Weather-related Disasters (743 KB)
Takuto Kobayashi, Satoshi Shirai, Satoshi Kitadate, pp.53-61
The Automated Meteorological Data Acquisition System (AMeDAS) is a meteorological observation system comprising approximately 1,300 stations scattered throughout Japan. It is operated by the Japan Meteorological Agency (JMA) to gather weather data such as amounts of precipitation, wind direction and speed, air temperature, sunshine duration, and depth of ground snow. Quality-assured and statistically processed observational data are used for issuing weather warnings and advisories as well as weather forecasting at JMA, and disseminated throughout Japan via JMA's Automated Data Editing and Switching System (ADESS), while some of this data is also provided to Asian and other countries via the same route. Having secured a commission from JMA for a system upgrade at the AMeDAS Center in FY2015, Fujitsu is currently engaged in system development. This paper describes some of the initiatives involved in the system upgrade. They are performed from the perspective of operational continuity in the case of portable data collection platform (DCP) precipitation recorders, which allow observation work to quickly recover from the impact of typhoons and earthquakes. One initiative enhances work efficiency by automatically detecting abnormal data fragments. This paper also presents accounts of the maintenance system which we at Fujitsu offer to ensure stable, round-the-clock operation of the system, involving our systems engineers in charge, relevant product departments, as well as support and sales teams.

Field Trial toward Low-carbon Society in Indonesia (1.26 MB )
Kenji Uchida , Minoru Fujii, Shuichi Ashina, Seiya Maki, Toshinori Hanya, Kengo Aizawa, Tsuyoshi Fujita, pp.62-72
Developing economies are rapidly pursuing urbanization and industrialization, and the consumption of fossil-fuel-based energy is increasing. Thus, the greenhouse gas emissions of these countries are also expected to increase. Fujitsu is collaborating with the National Institute for Environmental Studies of Japan, Bogor Agricultural University, and the Bandung Institute of Technology of Indonesia, working toward the application of continuous evaluation and field trial of energy-saving measures to model urban/industrial areas in Indonesia. This initiative is unique in that it leverages the technologies and expertise of Fuji Electric Co., Ltd., a company that has a high reputation in Indonesia for data measurement, as well as a local maintenance team. This initiative is also noteworthy for the use of big data analysis and highly reliable energy-saving assessment technology provided by Fujitsu Semiconductor Ltd. These strengths make it possible to select the energy-saving measures best suited for the culture and customs of Indonesia, and to quantify the effectiveness of evaluations using information and communications technology (ICT). We have high hopes that this initiative will lead to the application of large-scale energy-saving measures to urban areas and/or industrial parks as an inspection and field trial. It could thus make significant contributions to achieving a low-carbon society in developing countries. This paper discusses the role of ICT in this field trial.

National Supercomputing Centre Singapore: The HPC Leader in the Southeast Asia Region (567 KB)
Shun Utsui, Motohiro Yamada, pp.73-78
The National Supercomputing Centre Singapore (NSCC) is Singapore's national supercomputer center, and it has the objectives of supporting national R&D initiatives, attracting industrial research collaboration, and enhancing Singapore's research capabilities. In assisting this national-level research initiative for high performance computing (HPC) in Singapore, Fujitsu provided the system platform and is in charge of system operation. As an optimal system platform for NSCC, we selected the PRIMERGY Series for the computing nodes, and integrated storage, and a high-speed network from third-party vendors. For the system operation, Fujitsu developed an optimized support system that combines Fujitsu's proprietary know-how in HPC and the existing Managed Services of Fujitsu Singapore. This paper describes the challenges that were encountered and the solutions that were developed during system introduction and operation.