Accelerating AI research and development, demonstration, and implementation in society through industry-government-academia collaboration

Fujitsu today announced that it has received an order from Japan's National Institute of Advanced Industrial Science and Technology (AIST) for the "AI Bridging Green Cloud Infrastructure" supercomputer system, which aims to accelerate AI research and development in industry, government, and academia.

The new system will consist of 120 next-generation 2-way rack (4U) Fujitsu PRIMERGY GX2570 servers and a 11.2 petabyte, high-capacity storage system, each accelerated by eight GPUs(1) per node and suitable for large-scale analysis using AI such as deep learning. The theoretical peak performance of half-precision floating point operations(2), which represents an important benchmark in the AI field, is expected to be 300 petaflops(3), while that of double-precision floating-point operations(4), which are mainly used in the conventional simulation field, is expected to be 19.3 petaflops.

The "AI Bridging Green Cloud Infrastructure" system will be added to the AI Data Center Building at the National Institute of Advanced Industrial Science and Technology Kashiwa Center in Japan with the beginning of operations scheduled for fiscal 2021.

AIST launched the "AI Bridging Cloud Infrastructure (ABCI)" system on August 1, 2018, which enables advanced AI processing through coordination of algorithms, big data, and computational power, to accelerate leading-edge research and development of AI technologies and their implementation in industry and other fields in society. After receiving the order to construct "ABCI," Fujitsu successfully delivered a cloud infrastructure for AI applications featuring the world's highest level of machine learning processing capacity, high-performance computing capacity, and energy efficiency. Since its launch, more than 1,000 users in total, ranging from AI-related startup companies to general electrical appliance manufacturers, have leveraged the powerful system to engage in AI research and development.

In response to rapidly increasing demand for AI R&D in industry, government, and academia, AIST will introduce a new "AI Bridging Green Cloud Infrastructure" system to bolster its existing "ABCI", combining a high-performance computing system with a large-capacity storage system while following the basic structure of the "ABCI". AIST has awarded this order to Fujitsu in recognition of the results it delivered for the existing system, as well as the strength of its proposal, which draws on the combined technological capabilities of Fujitsu and Fujitsu Laboratories Ltd. and features a system consisting of 120 of its latest x86 servers with 8 GPUs and a 11.2 petabyte large-capacity storage system.

Fujitsu will continue to play a central role in contributing to the advancement of AI research and development in Japan through its involvement with the "AI Bridging Green Cloud Infrastructure" project with the AIST, leveraging the knowledge acquired through the construction and operation of this system for new initiatives with a variety of stakeholders in industry, government, and academia. 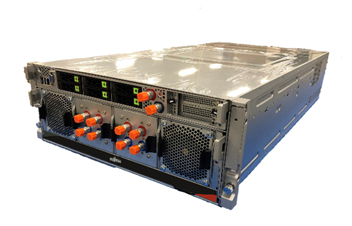