Riken and Fujitsu today announced that the Supercomputer Fugaku(1), jointly developed by RIKEN and Fujitsu, was awarded the highest prize: the "Minister of Internal Affairs and Communications Award" at CEATEC AWARD 2020.

Both RIKEN and Fujitsu will attend the CEATEC 2020 ONLINE event, which will be held from October 20th to the 23rd. RIKEN will introduce its efforts to position Fugaku as the core foundation to deliver on the promise of Society 5.0, while Fujitsu will introduce how the project will help to bring trust to society through innovation and make the world more sustainable.

About CEATEC AWARD 2020 "Minister of Internal Affairs and Communications Award"

CEATEC AWARD 2020 recognizes the technologies, products, and services displayed at CEATEC 2020 ONLINE, which are determined by the CEATEC AWARD 2020 judging committee to be of a highly innovative and superior quality in terms of both academic and technical aspects, market potential, and future prospects.

Among the various award categories, projects given the "Minister of Internal Affairs and Communications Award" are those considered to contribute the most to the advancement of the cyber physical system (CPS) / IoT society and to the realization of Society 5.0(2), including the advanced utilization of information and communications / networks / data / AI / IoT technologies in the IoT / big data era, provision of services based on these technologies, AI networking, and use of IoT in local communities.

In particular, this award is given to projects, technologies, products, services, or supporting software, applications, components, and devices that are considered to contribute most to the promotion of more fulfilling ways of living, as well as adding value and efficiency to society and economic activities, through Digital Transformation (DX) in the "new normal" era.

Reasons for the Award

Fugaku was recognized by the selection committee as one of on its world-leading, comprehensive capabilities, including both the world's highest performance and revolutionary, energy-efficient design, achieved through a unique co-design process to deliver unparalleled performance and user-friendliness

It is also expected to contribute to the expansion of new opportunities for the Japanese ICT industry and the enhancement of industrial competitiveness in various fields by helping to address urgent issues confronting society and serving as infrastructure for DX. Many anticipate that it will also play a key role in driving innovation in fields as varied as life science, energy, manufacturing, and the environment.

Major activities of Fugaku to date

At present, Fugaku remains under development and preparation with the aim of commencing shared use in fiscal 2021. On a trial basis, some of the computing resources (nodes) are being used in research on countermeasures against COVID-19 and in programs to accelerate the generation of results. 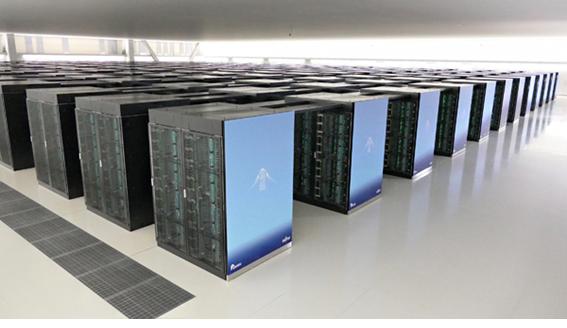 RIKEN will continue to promote the development and preparation of Fugaku and will also develop software and prepare the development environment related to AI, big data processing, and cloud utilization as the core platform for making Society 5.0 a reality. Through Fugaku, RIKEN will make important contributions to the resolution of persistent social and scientific issues.

Fujitsu will provide high-performance computing solutions including the Fujitsu Supercomputer PRIMEHPC series, which leverages the technology of Fugaku and contributes to the resolution of social issues, accelerates cutting-edge research, and strengthens the competitiveness of its customers through DX.