Private 5G demonstrates great promise as a key infrastructure technology to support digital transformation (DX) for a variety of companies across different industries and business areas, delivering low-latency communications for applications as varied as AI video analysis on worksites to seamless remote operations for robots in manufacturing and medical facilities. In order to realize this technology's true potential, however, it is essential to optimize the deployment of wireless base stations. This often proves challenging, and despite its wide bandwidth the millimeter wave band remains difficult to handle because of its susceptibility to interference, including obstruction by surrounding obstacles. To avoid this, radio experts are often needed to determine the correct location of wireless base stations, which remains costly and requires extensive field adjustments.

With its new technology, Fujitsu has successfully developed a high-speed algorithm that can automatically calculate the best placement for private 5G millimeter wave base stations 5 to 10 times faster than conventional approaches. The technology also accounts for the adjustment of parameters including transmission power, radio channel, antenna direction and position, which makes it easier for non-radio experts to determine layouts for wireless base stations for private 5G systems.

Going forward, Fujitsu will continue to advance its automated design technology and aims to leverage it in the area design of its private 5G system integration service within fiscal 2020.

Challenges, About the Newly Developed Technology

Fujitsu has previously developed an automatic wireless base station design technology(1) that enables non-specialists to design and install wireless LAN networks in a day or so, instead of the previous seven-day work required by wireless experts, by using radio wave simulation technology that makes use of the knowledge of network technology we have accumulated over the years. However, the millimeter-wave band is more direct than microwaves of 6 GHz or less, which to date have been used mainly in cellular and wireless LANs. Therefore, the millimeter-wave band is easily affected by surrounding obstacles, and furthermore, the signal attenuation is large when the distance between the base station and the terminal increases. Therefore, by controlling the antenna with many antenna elements to perform beamforming(2), it is important to increase signal power and compensate for attenuation by directing radio waves to each terminal.

In designing a private 5G system in the millimeter-wave band, the number of base stations required increases due to the attenuation characteristics of the millimeter-wave. Additionally, many combinations need to be explored to estimate the effect of beamforming, which greatly increases the amount of computation required for automatic wireless base station deployment. As a result, it may take more than one day for each high-precision simulation on a typical desktop PC in an office, etc., and shortening the calculation time remains a important challenge to overcome.

To resolve these issues, Fujitsu Laboratories developed the technology described below:

Radio wave simulation has a branching structure that performs simulation calculations of propagation for each route in each combination of base stations and terminals for calculation scenarios that consist of movement or change of surrounding objects, base station candidate positions, and terminal candidate positions. When the CPU is allocated in parallel by dividing the calculation at the path level of the smallest unit of calculation as in the conventional method, the simulation time varies because the distance and the presence of obstacles differ depending on the path, and the overhead due to the synchronous processing of parallelization is large. On the other hand, dividing the calculation at the scenario level of the largest unit of calculation may make it hard to fully utilize the computing resources of the processor when the number of scenarios is small. 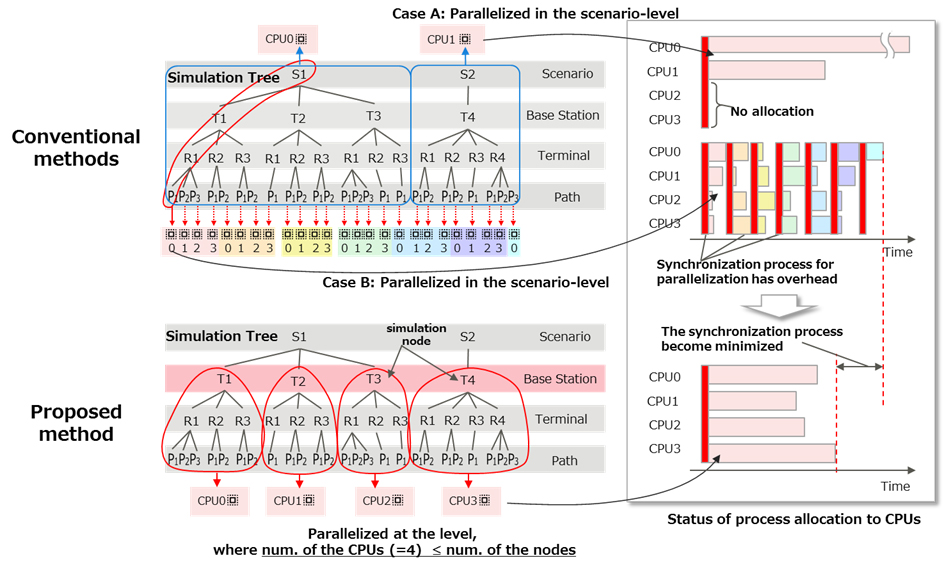 In addition, in the simulation of beamforming, which takes into account the directionality of antennas for millimeter-wave band private 5G systems, instead of the conventional method of searching for a combination of base station and terminal beam patterns, 1/10 the range of search can be narrowed down based on information such as the direction of radio waves and signal intensity obtained from the results of radio wave simulation, and the characteristic amounts of the base station and terminal beam patterns. 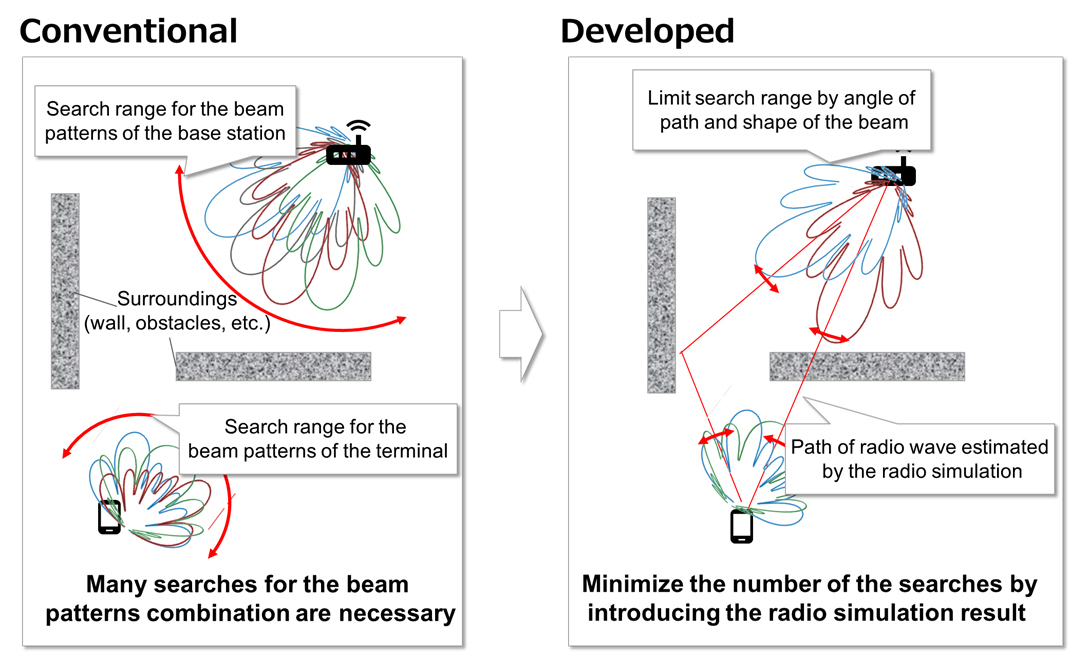 The newly developed technology enables the calculation of radio wave simulation and beamforming performance estimation to be accelerated by 5 to 10 times at maximum. For example, when high-precision radio wave simulation is conducted with 24 wireless base station position candidates and 40,000 terminal position candidates in a place simulating a factory with an area of 10,000 square meters, the calculation can be completed in about two hours with a desktop computer.

This represents a considerable improvement over existing approaches, and promises to accelerate planning for placement of terminals and wireless base stations for private 5G systems in the field, delivering customers the chance to accelerate the digital transformation of their operations.