Fujitsu Laboratories, Ltd. has developed the world's first AI technology that accurately captures essential features, including the distribution and probability of high-dimensional data in order to improve the accuracy of AI detection and judgment.

High-dimensional data, which includes communications networks access data, types of medical data, and images, remains difficult to process due to its complexity, making it a challenge to obtain the characteristics of the target data. Until now, this made it necessary to use techniques to reduce the dimensions of the input data using deep learning, at times causing the AI to make incorrect judgments.

Akira Nakagawa, (Associate fellow) of Fujitsu Laboratories commented, "This represents an important step to addressing one of the key challenges in the AI field in recent years: capturing the probability and distribution of data. We believe that this technology will contribute to performance improvements for AI, and we're excited about the possibility of applying this knowledge to improve a variety of AI technologies."

In recent years, there has been a surge in demand for AI-driven big data analysis in various business fields. AI is also expected to help support the detection of anomalies in data to reveal things like unauthorized attempts to access networks, or abnormalities in medical data for thyroid values or arrhythmia data.

Data used in many business operations is high-dimensional data. As the number of dimensions of data increases, the complexity of calculations required to accurately characterize the data increases exponentially, a phenomenon widely known as the "Curse of Dimensionality"(1). In recent years, a method of reducing the dimensions of input data using deep learning has been identified as a promising candidate for helping to avoid this problem. However, since the number of dimensions is reduced without considering the data distribution and probability of occurrence after the reduction, the characteristics of the data have not been accurately captured, and the recognition accuracy of the AI is limited and misjudgment can occur (Figure 1). Solving these problems and accurately acquiring the distribution and probability of high-dimensional data remain important issues in the AI field.

Fujitsu has developed the world's first AI technology that accurately captures the characteristics of high-dimensional data without labeled training data.

Fujitsu tested the new technology against benchmarks for detecting data abnormalities in different fields, including communication access data distributed by the International Society for Data Mining "Knowledge Discovery and Data Mining (KDD)", thyroid gland numerical data and arrhythmia data distributed by the University of California, Irvine. The newly developed technology successfully achieved the world's highest accuracy in all data with up to a 37% improvement over conventional deep-learning based error rates. Since this technology solves one of the fundamental challenges in the field of AI, which is how to accurately capture the characteristics of data, it is expected to prove an important development to unlocking a wide range of new applications.

The technical features of the developed technology are as follows.

1. Proof of theory that accurately captures the characteristics of data

In compression of image and audio data, which are both high-dimensional data consisting of several thousand to several million dimensions, the distribution and occurrence probability of the data have been clarified through many years of research, and methods for reducing the number of dimensions by means of discrete cosine transform(2) and other methods optimized for these known distributions and probabilities have already been established. It has been theoretically proven that the amount of compressed data information can be minimized when the degradation between the original image/sound and the restored image/sound is suppressed to a constant level by restoring data using the distribution of data after dimension reduction and the probability of occurrence. 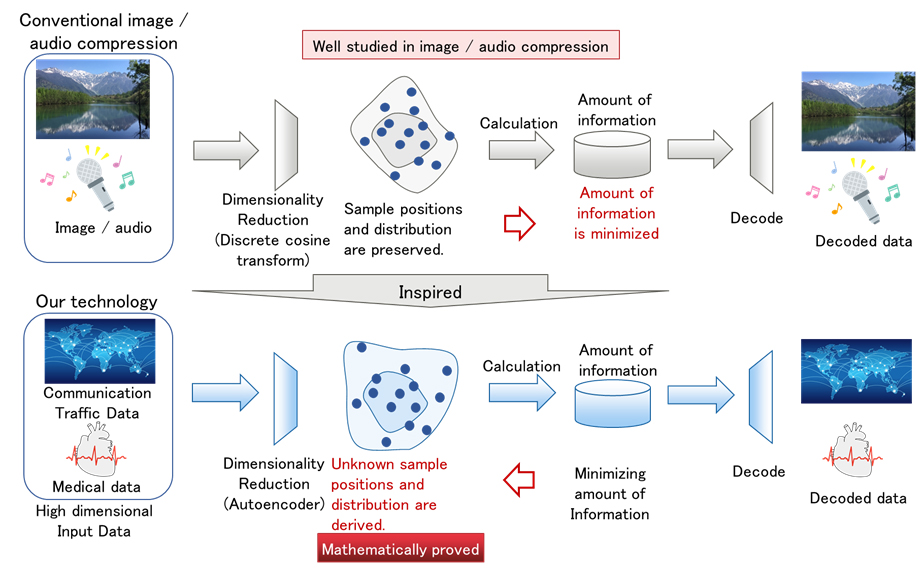 In general, deep learning can determine the combination of parameters that minimize the objective cost even in complex problems by defining the objective cost that need to be minimized. Using this feature, Fujitsu introduced parameters to control both the auto-encoder which reduces the dimension of data and the distribution of data after dimensionality reduction. Our method calculates the amount of information after compression as an objective cost and optimized it through deep learning. This allows the dimensionally reduced distribution and probability of the data to be accurately characterized when optimized according to the mathematical theory described in 1 above.

Going forward, Fujitsu will promote the practical application of the newly-developed technology, with the aim of putting it into practical use by the end of fiscal 2021, and will apply it to even more AI technologies.