Fujitsu today announced that Fugaku(1), a supercomputer jointly developed by RIKEN and Fujitsu, was ranked No. 1 in the 55th TOP500 list of the world's supercomputers. Fugaku also took the No.1 position in the international ranking HPCG (High Performance Conjugate Gradient), which measure the processing speed of the conjugate gradient method(2) often used in practical applications including in the field of industry, and in the ranking of HPL-AI, which measures the performance of low-precision computing often used in AI such as deep learning.

The achievement of No. 1 in these three rankings indicates the overall high performance of Fugaku and demonstrates that it can sufficiently respond to the needs of Society 5.0(3) which aims to build a smart society that creates new value. Fugaku can contribute in such society as an information infrastructure technology accelerating the solution of social problems with simulation while advancing the development of AI technologies as well as technologies related to information distribution and processing. 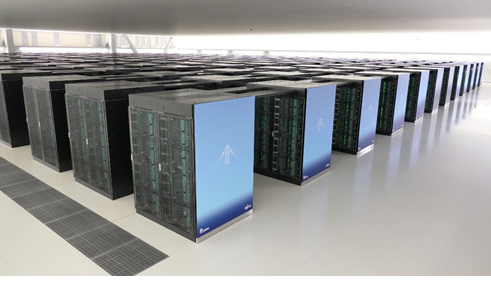 About the supercomputer benchmarks

Ten years after the initial concept was proposed, and six years after the official start of the project, Fugaku is now near completion. Fugaku was developed based on the idea of achieving high performance on a variety of applications of great public interest, such as the achievement of Society 5.0, and we are very happy that it has shown itself to be outstanding on all the major supercomputer benchmarks. In addition to its use as a supercomputer, I hope that the leading-edge IT technology developed for it will contribute to major advances on difficult social challenges such as COVID-19.

I believe that our decision to use a co-design process for Fugaku, which involved working with RIKEN and other parties to create the system, was a key to our winning the top position on a number of rankings. I am particularly proud that we were able to do this just one month after the delivery of the system was finished, even during the COVID-19 crisis. I would like to express our sincere gratitude to RIKEN and all the other parties for their generous cooperation and support. I very much hope that Fugaku will show itself to be highly effective in real-world applications and will help to make Society 5.0 a reality.

The Fugaku supercomputer illustrates a dramatic shift in the type of compute that has been traditionally used in these powerful machines, and it is proof of the innovation that can happen with flexible computing solutions driven by a strong ecosystem. For Arm, this achievement showcases the power efficiency, performance and scalability of our compute platform, which spans from smartphones to the world's fastest supercomputer. We congratulate RIKEN and Fujitsu for challenging the status quo and showing the world what is possible in Arm-based high-performance computing.

This is a Fujitsu translation of a Japanese press release issued by RIKEN and Fujitsu Limited.