Traditionally, magnetic tape storage has been used mainly for backup purposes, but because of its high capacity and low cost, as well as the acceleration of transfer speeds and the spread of the Linear Tape File System (LTFS) in recent years, it is expected to find increasing use for archival purposes.

This technology will accelerate the adoption of magnetic tape storage technology as an archival medium in anticipation of the exponential growth of data in the future. By promoting this technology, Fujitsu will help companies to achieve their digital transformation goals through data storage solutions that offer superior performance at a reasonable cost. Fujitsu Laboratories is currently conducting a verification trial assuming the application of this technology to its operations, with plans to commercialize the technology by the end of fiscal year 2022.

Details of this technology will be presented at the 12th Forum on Data Engineering and Information Management (DEIM 2020), which will be held from March 2nd to March 4th.

While magnetic tape storage is ideally suited to reading from and writing to sequential areas of tape, its ability to randomly access discontinuous locations remains limited. The technology's relative inability to deliver random access reading presents a roadblock to broadening its use into high volume data archiving applications.

In general, to manage a large amount of data with magnetic tape storage, data is held under a different directory for each tape cartridge on LTFS, which uses multiple tape cartridges and can access data on a file-by-file basis in the same way as data on HDDs, USB memory, etc. 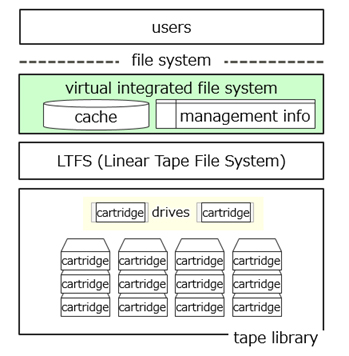 On a magnetic tape, data is divided along its length in units called wraps, and each wrap wraps around and is written in a write-once fashion. Therefore, the distance between the logical address and the physical address is very different. The virtual consolidated file system accepts multiple random read requests and processes them starting with the closest physical location on the tape, not the logical address.

When writing to magnetic tape, write and error checking are performed in parallel, and when an error occurs, only the part of the error that occurred after the end of writing is automatically rewritten. Therefore, it is difficult to predict the physical location where a rewrite has finished from the change in file size. The physical location of each file is estimated by periodically measuring the head position after writing the file.

Also, when accessing the magnetic tape, it takes time to align the head to the start position. Therefore, two read requests that are close to each other on the same wrap will not read two files at once, but will read all the files in between and discard unnecessary files.

LTFS maintains an index of each file on magnetic tape, and the impact increases exponentially as the number of files increases. When using tapes for archival purposes, users write and access files of various sizes, but writing large numbers of small files can significantly degrade read performance.

Therefore, Fujitsu has developed a mechanism to keep small files smaller than a specified file size together as large files on LTFS so that users can access them without worrying about the location of the files. In addition, by managing the metadata of user files in the virtual integrated file system, it is possible to quickly display a list in a way other than data reading, add extended attributes, or delete files without accessing the magnetic tape. 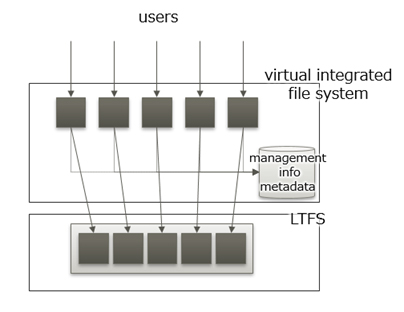 This technology enables high-speed tape access performance, such as random reads and writes of various sizes occurring in archive applications, and is expected to provide a cost-effective data archiving infrastructure for long-term archiving of large volumes of data.