Fujitsu Limited and Fujitsu Advanced Engineering Limited today announced that they conducted a field trial using image processing technology to identify the positions of stone blocks in walls prior to the collapse that damaged the five-story Iidamaru Turret (Iidamaru Gokai Yagura) in Kumamoto Castle(1), caused by the Kumamoto earthquake in April 2016. In the field trial, which took place over the course of about one month beginning in November 2018, Fujitsu confirmed that the use of the technology led to a significant reduction in the time required for this process, delivering greater than 80% accuracy.

Through the field trial Fujitsu developed a system to identify the positions of stones using high-speed partial image search technology(2), which rapidly searches for matches of a specified image from a huge library of candidates, even when it represents just a partial match. This technology was then combined with an image optimization technology to increase the accuracy of that search. The technology verified during this field trial was used to match images of the collapsed stones with images of the still-intact stone wall prior to its collapse, in an effort to both improve accuracy and reduce search time. The results showed that the technology was able to identify the correct locations of stones to restore the wall to its original state with greater than 80% accuracy, while also significantly reducing the time required for the matching process.

Going forward, Fujitsu aims to further increase the accuracy of this technology to support streamlined and full-fledged Kumamoto Castle restoration, with the goal of commercialization in fiscal 2019. 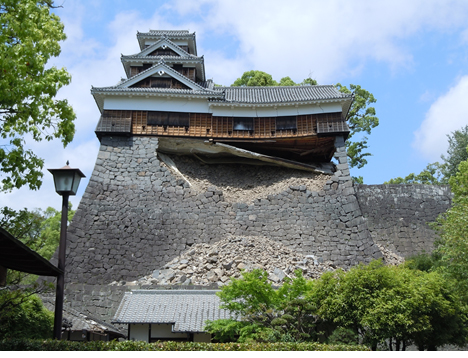 As a designated national historic landmark, Kumamoto Castle, which was damaged in the Kumamoto earthquake that occurred in April 2016, must be restored to its condition prior to the disaster in order to protect its cultural value. While restoration efforts are currently underway, the basic plan for the restoration of Kumamoto Castle set out in March 2018 estimates that it will take about 20 years to fully complete. At issue here is the massive amount of time required to identify the proper positions of the roughly 30,000 individual stone blocks that have collapsed from the stone walls, which suffered the most damage during the quake. Previously, the task of identification was performed by experts painstakingly comparing images of the stone walls taken before the collapse with maps of the scattered debris in the wake of the disaster.

To address this issue and shorten the time required on-site for restoration work at Kumamoto Castle, Fujitsu and Fujitsu Advanced Engineering developed and conducted a field trial of a system that could facilitate an accurate understanding of stone positions prior to collapse. They did this by using images of the stones taken after the collapse and images of the original stone walls, which were provided by the Kumamoto Castle Research Center(3).

The system increased search accuracy by applying image optimization technology that made features stand out, such as cutting out only the parts of the image with the stones, or emphasizing the brightness of the surfaces of the stones or wall. Then, by using high-speed partial image search technology to extract images that fully or partially matched a certain stone, images with a higher degree of similarity were identified. This answered the question of where collapsed stones were located in the wall prior to the collapse. This process was repeated in an effort to improve accuracy and shorten search times.

The result was that, ultimately, Fujitsu confirmed that this system was able to identify the correct locations of 101 individual stones in a single day, not only providing a high degree of accuracy, at 82.1% (101 out of 123 stones), but also significantly reducing the time required for this task.

Overview of the field trial

Fujitsu and Fujitsu Advanced Engineering will continue to further improve the accuracy of this technology in order to support streamline the Kumamoto Castle restoration process, which will soon enter full-scale operations. Fujitsu will also apply the solution to other restoration projects for cultural assets, with the goal of commercializing the technology as a cultural asset restoration support solution during fiscal 2019.

Kumamoto City has been working to identify the locations of collapsed stones in this wall for some time, and we were surprised by the identification speed and accuracy, in excess of 80%, confirmed in this field trial. We look forward to the further evolution of this sort of image processing technology, and we expect it will contribute to the early restoration of Kumamoto Castle.

Fujitsu Develops Technology for Instantaneous Searches of a Target Image from a Massive Volume of Images (press release, February 2, 2016)