Fujitsu today announced that it will begin sales of its Fujitsu Server PRIMERGY Liquid Immersion Cooling System in Japan today, with a global rollout to follow.

This product is a cooling system designed to efficiently cool the entire IT devices equally by immersing it in cooling fluid. Large-scale cooling equipment is not required, so the system reduces the total power consumption for the server system as a whole by about 40%(1) compared to existing air cooling systems. This dramatic reduction of power consumption allows customers to approximately double the server density in the same installation space(2).

New technologies that process huge volumes of data, including IoT-enabled solutions and artificial intelligence (AI), have become increasingly common in recent years, leading users to demand further improvements in performance from the servers that form the system platforms for these new technologies. At the same time, high-speed processing results in an enormous rise in the heat generated by servers, and consequently, ever greater amounts of energy and space are required for cooling. Such challenges create an urgent need for a system that delivers improved cooling capabilities.

By immersing a server in a liquid that has high heat conducting properties and electrical insulating properties, this system efficiently cools the entire server equally. In addition, because the heat generated by the server is not emitted into the server room, air conditioning equipment for such areas or other facilities will be unnecessary. The cooling system also provides high energy efficiency because the server does not require internal cooling fans, boasting a power usage effectiveness (PUE, 3) ratio of 1.07. This not only reduces the server system's overall power consumption, by approximately 40% compared to air cooling systems (including its cooling equipment), it also enables approximately double the server density in the same installation space, contributing to reductions in the total cost of ownership (TCO).

By using Fujitsu's specially developed, well-sealed "immersion bath," this system minimizes vaporization of the cooling fluid. Maintenance of the system remains very easy because the fluid used as a cooling medium is also non-combustible, not harmful to humans, and does not need to be regularly replaced as the quality does not deteriorate.

3. Fujitsu provides a one-stop solution, from installation to after-sales support

Fujitsu provides a one-stop solution for everything from the installation of an immersion bath and coolant distribution units (CDUs, 4) to plumbing, server operations maintenance work, and post-installation support, including equipment maintenance. In addition, because this system is offered as an option for the Fujitsu Server PRIMERGY series(5) of x86 servers, the latest models can be incorporated into this immersion system going forward. 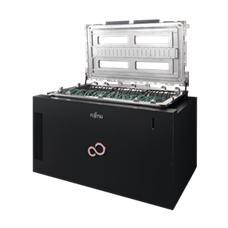 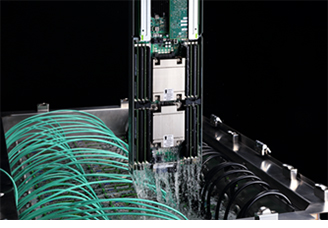 A server being taken out of the cooling fluid

This product has been adopted for a cluster configuration for a computation center for biology and bioinformatics at the Indian Institute of Technology Delhi, where it has been well-received for having reduced operating costs through its low power consumption. Its ability to operate at low noise levels also meant it could be installed near laboratories, while the system's highly efficient cooling provided users with sustained high computational performance.

Because a server immersed in cooling fluid is not exposed to outside air, it can be installed in a variety of environments that were not suited for installing existing servers, such as high temperature, high humidity regions, manufacturing sites that have oils or dust in the air, or in seaside areas where there are concerns about salt damage.

Fujitsu will support its customers in the further transformation of their businesses going forward by using liquid immersion cooling technology to build high performance server systems in places they could never be installed before.

*Not including the price of ICT components, such as servers