Fujitsu Limited and NPO SEEDS Asia(1) today announced that they will conduct a field trial in India that utilizes a smartphone application, including augmented reality (AR) technology(2) , to counter flooding and to raise citizens' disaster awareness. The field trial seeks to measure flood water levels and to map out and visualize conditions of urban flooding. The trial will be conducted in India's Varanasi, an urban area prone to flooding damage, between July and September 2018 when localized and torrential rains are frequent.

In India, flood damage in cities due to sudden rain storms has become increasingly serious, demanding measures to accurately grasp the state of urban flooding and quickly deliver evacuation instructions. This field trial will use a smartphone app and the support of the staff and students of seven local schools(3) , students from Banaras Hindu University, Varanasi city residents from whom the District Disaster Management Authority(4) has gained cooperation, and others, to measure the water level at 12 locations(5) at regular intervals when it is raining. Furthermore, in addition to immediately displaying the measurement data on a map so that evacuation instructions can be quickly issued to residents, the system will be evaluated for its effectiveness in collecting disaster prevention information that can be used as a map indicating flooding danger zones.

Varanasi has seen average rainfalls in excess of 300 mm in the July, when rainfall volumes are heaviest, and as the city's terrain hinders drainage, damage done by frequent flooding has become a serious problem in the rainy season. In order to resolve these issues, Fujitsu and SEEDS Asia are jointly conducting a field trial which will leverage a smartphone app, including AR technology, to measure flood water levels in and Indian city and visualize urban flooding. The system will be evaluated for its effectiveness in collecting information that would be useful in disaster prevention, such as in issuing evacuation directions to residents.

Details of the Field Trial

1. Fujitsu: Management of the field trial, development of the application, construction of the system, and visualization of measurement data.

1. Water Level Measurement
The staff and students of seven local schools, employees of Varanasi's District Disaster Management Authority, and Banaras Hindu University students will use smartphones to measure water levels at 12 locations within Varanasi at regular intervals when it rains, using one of the following three methods depending on measurement location.

2. Visualization of City Flooding
The system will display measurement results and three damage levels on a map. 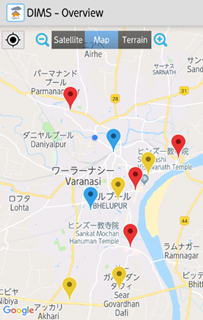 3. Evaluation of the System's Effectiveness as Information on Disaster Prevention
The trial will evaluate the effectiveness of the map visualizing the measurement data and the state of flooding in the city as a hazard map, for use in tasks such as issuing evacuation instructions to residents.