Fujitsu today announces that its AI Bridging Cloud Infrastructure (ABCI) system has placed 5th in the world, and 1st in Japan, in the TOP500 international performance ranking of supercomputers.  ABCI has also taken 8th place in the world in Green500, which ranks outstanding energy saving performance. Fujitsu developed ABCI, Japan’s fastest open AI infrastructure featuring a large-scale, power-saving cloud platform geared toward AI processing, based on a tender issued by the National Institute of Advanced Industrial Science and Technology (AIST).

These rankings were announced on June 25 (Japan time) at ISC 2018, an international conference on high performance computing (HPC) held in Germany. TOP500 evaluates and ranks the top 500 computer systems in the world by computational processing speed. Green500 ranks the TOP500-listed supercomputers to offer excellent examples of power consumption performance.

In the TOP500 performance testing, ABCI achieved a LINPACK performance(1) of 19.88 petaflops(2) using its 1,088 computational nodes, due to application acceleration technology and other technologies developed by Fujitsu and Fujitsu Laboratories Ltd. in their experience in HPC development. Through the use of such technologies as performance balance optimization as well as overlapping optimization of computational processing and communications processing, Fujitsu was able to not only improve GPU computational efficiency, but also optimize communications processing between servers, eliciting maximum hardware performance.

In addition, ABCI achieved a performance value of 12.05 gigaflops(3) per watt in the Green500 rankings, earning world-class recognition not only for performance, but also as a supercomputer system with excellent energy efficiency.

AIST plans to begin full-scale operations with ABCI from August 2018. As a type of open AI infrastructure geared to deliver the fastest AI processing in Japan, ABCI's computational resources will be available to a broad range of organizations, from research institutions and universities to research by private companies, rapidly advancing the use of cutting-edge AI technology by industry and contributing to the creation of technologies useful for Japanese industry and society. 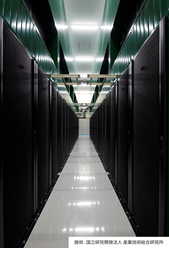 "AI is transforming virtually every industry. ABCI, powered by over 4,300 NVIDIA Volta Tensor Core GPUs, is one of the largest GPU accelerated supercomputer systems for AI. Volta Tensor Core GPUs, the engine for modern AI, is designed for the future of computing where deep learning is fused with traditional high-performance computing for accelerating scientific and industrial progress. ABCI will fuel AI adoption across Japan."
- Ian Buck, Vice President and general manager of Accelerated Computing at NVIDIA