More than doubles the accuracy of structure detection in medical images

Fujitsu Laboratories Ltd. today announced the development of AI technology that uses deep learning to detect objects(1), even in cases when only a small amount of data is available for learning.

In recent years, there have been efforts to automate tasks in a variety of fields. In the medical field, for example, there has been a desire to use AI to automate such tasks as detecting objects, including anomalous spots, in the analysis of diagnostic images. It is typical to utilize deep learning in object detection, which involves identifying specific structures in a diagnostic image, but in order to produce accurate results, tens of thousands of images with correct data are necessary. However, since correct data can only be created by doctors with expert knowledge, it has been difficult to obtain the images in such huge volumes.

Now, Fujitsu Laboratories has developed a technology (patent pending) that takes the object location estimates produced by the object detection neural network and makes them into a reconstruction of the original image. Then, by assessing the difference between the original input image and the reconstructed image, it can create large volumes of correct data where the position of objects has been accurately estimated. This raises the level of accuracy in object detection. Fujitsu Laboratories has collaborated with the Graduate School of Medicine at Kyoto University and applied the newly developed technology to the detection of bodies called glomeruli (singular glomerulus) in kidney biopsy images. The results of an evaluation showed that in an experiment using 50 images with correct data and 450 images without correct data, compared with existing training methods using only the same number of images with correct data, the accuracy of the new technology had more than doubled, under the stipulation of an oversight rate of less than 10%.

Expectations have been increasing for the automation of tasks using AI in a variety of fields in recent years. Fujitsu Laboratories has been conducting a joint research with the Graduate School of Medicine at Kyoto University(2), and one of those initiatives has been research into supporting the diagnosis of kidney disease using AI. In the medical field, there is a diagnostic test that checks the number and status of structures called glomeruli, which handle the filtration of blood. The test uses images taken in a microscope of a slice of a kidney extracted in a procedure called a kidney biopsy. It is widely known, however, that there are large variations in the time required for the task of finding glomeruli while the image is enlarged, and in how the observer evaluates the condition of the bodies, even among experts. This has created a demand for an accurate, automated count of the number of glomeruli and diagnosis. 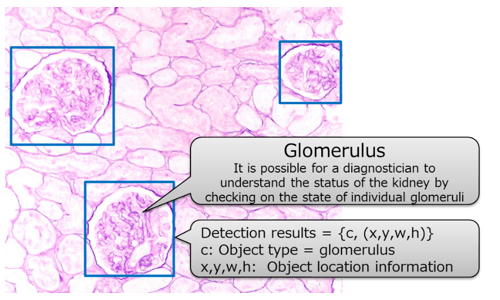 To automatically extract data for possible glomeruli from images, it is necessary to identify the locations of the glomeruli from the images provided, and deep learning is widely known as a method for identifying the locations and types of objects in images. For this training method, it is essential to have large volumes of images along with information on the locations and types of objects in the images (correct data). However, it has previously been difficult to prepare large volumes of correct data, because it must be created by doctors with specialized knowledge.

In order to increase images with correct data, one might consider a method that increases the amount of images in the face of large volumes of image data, by having the neural network estimate object locations and supplementing them as correct data. Neural networks that have been trained on small amounts of correct data, however, have a problem unique to object detection, in that they face difficulty in estimating the location of an object in precisely the same place as it is in reality. Therefore, if the data from this imprecise estimation is used to further train the model, accuracy will be undermined.

In response, Fujitsu Laboratories has now developed technology to evaluate the degree to which the output location estimate is correct, by using the estimated results of the detection neural network as a key to reconstruct the original image using a neural network for reconstruction. Because images reconstructed from incorrect location estimates will not match the original image, by comparing the two images, it is possible to evaluate the accuracy of an estimate location. By repeatedly conducting estimations and reconstructions on large volumes of images in this way, Fujitsu Laboratories has made it possible to increase the amount of correct data while also gradually approaching a state in which the model produces correct location estimates, thereby increasing accuracy.

Figure 2: New network structure to evaluate the estimated positions by reconstructing the image

In joint research with the Graduate School of Medicine at Kyoto University, this technology was applied to the detection of glomeruli in kidney biopsy images. The research compared an existing object detection neural network trained using only 50 images with the correct data, with this technology, trained using those same images and an additional 450 images without the correct data. The results showed that, stipulating an oversight rate of less than 10%, similar to that of human evaluators, this technology achieved an accuracy of 27%, more than double that of the existing technology. This means that, where a single image might have an average of 22 glomeruli, this technology reduced the candidate locations needed to be searched due to the above stated oversight rate to 77, reducing post-processing costs. By increasing the accuracy of glomerulus detection and reducing the number of candidate locations, it is expected to accelerate the research of kidney diseases and the development of the diagnosis system based on glomeruli detection.

Though its joint research with the Graduate School of Medicine at Kyoto University, Fujitsu will endeavor to realize the quantitative evaluation method of kidney by applying the new detection technology of glomeruli. This technology is not only applicable to specific applications such as kidney biopsy images, but also to object detection more broadly, in fields lacking in images with the correct data. For example, the company envisions the technology to be applied to a broad range of areas beyond healthcare, such as in detecting defective products using images from production lines, identifying anomalous locations from diagnostic images using a variety of sensors in infrastructure facilities, and creating lists of materials to be used from architectural blueprints. Fujitsu Laboratories aims to deploy this technology during fiscal 2018 as a learning model construction technology supporting Fujitsu's Zinrai Platform Service, which makes AI technology available through APIs.