Fujitsu Limited and The Shinano Mainichi Shimbun, a regional newspaper in Japan, today announced that they have created an artificial intelligence-based automated article summarization system. In a field trial to summarize articles utilizing Fujitsu Human Centric AI Zinrai, Fujitsu's approach to AI, the system was capable of being used on a variety of media distribution formats.

The Shinano Mainichi Shimbun will deploy this system in its news distribution service for cable TV, with full-scale operations beginning in April 2018. This will accelerate news delivery for cable TV.

This system uses automated summarization technology developed by Fujitsu Laboratories Ltd., combining natural language processing technology with machine learning technology. In the trial, it was shown that the system could not only summarize an article instantaneously, a task that previously would have taken up to five minutes per article to do by hand, but also that it could summarize articles with greater accuracy-closer to what would be done by hand-than the existing lead method(1).

Fujitsu is making this system available through a web API(2) that can be easily used by The Shinano Mainichi Shimbun without change to its existing workflow.

In recent years, newspaper companies have been moving beyond delivery of the news via paper and have diversified to web news, SNS and other media formats. Because different media have different limits on the number of words or characters, newspaper companies have had to summarize articles to suit those requirements. As this task previously had to be done manually, it was difficult to increase work efficiency and reduce costs.

In light of this situation, The Shinano Mainichi Shimbun worked with Fujitsu to conduct a field trial of an automated article summarization system using AI in order to improve work efficiency for its cable TV news report service. Because the results of this trial showed that the system could instantaneously summarize an article with the same high accuracy as when done by hand, The Shinano Mainichi Shimbun has now decided to deploy this system for actual operations.

Fujitsu created a model by applying machine learning and natural language processing to a total of about 2,500 sets of past articles from The Shinano Mainichi Shimbun and the summaries of those articles that had been made by hand, and built an automated article summarization system that automatically creates summarized articles optimized for the cable TV news delivery service. By using this system to automatically summarize articles, it has become possible to summarize in an instant what had previously taken up to five minutes per article to summarize manually. In addition, compared with the lead method, a previous article summarization method that summarized articles by mechanically extracting sentences starting from the top of the article up to the word or character limit, this system extracts important sentences from parts of the article beyond the lead, enabling it to create summarized articles with the same accuracy as the manual process. After this system was completed, it was used to summarize previously delivered "News Packs"(3) from Kyodo News, and it was able to produce similar results.

In addition, because this system was created with a web API, it can easily be implemented without impacting the existing the workflow of the cable TV news service. 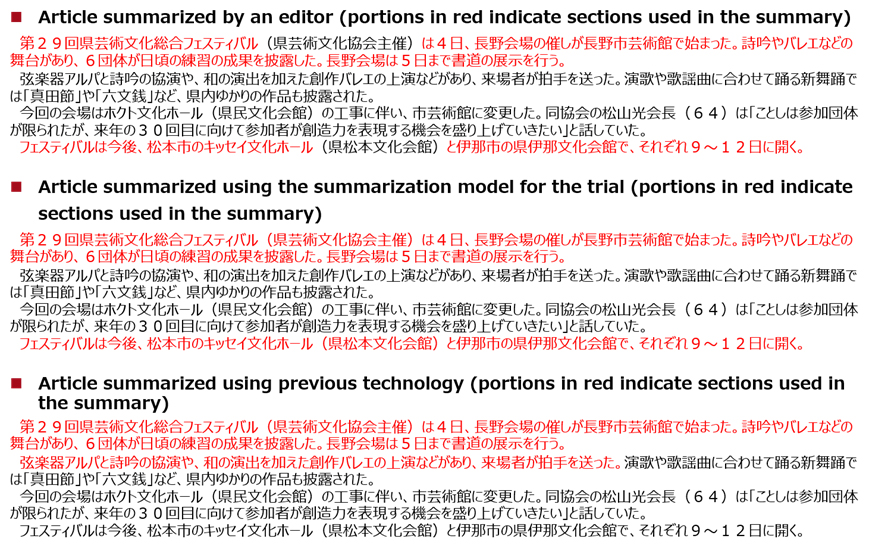 Examples of summarization by an editor (top), by the summarization model from the trial (middle), and by previous technology (bottom). Sections in red appear in summary.

The Shinano Mainichi Shimbun's news distribution service for cable TV had previously involved a five-step process, from deciding which articles to deliver, to sending them to a media editing system, summarizing the article, creating a headline, and proofreading. The step that took the most time was summarizing the articles, which could take between 3 and 5 minutes per article. By utilizing the automated article summarization system, this step can be eliminated, which is expected to reduce the time required for the entire process by about half, accelerating the operations of the service. 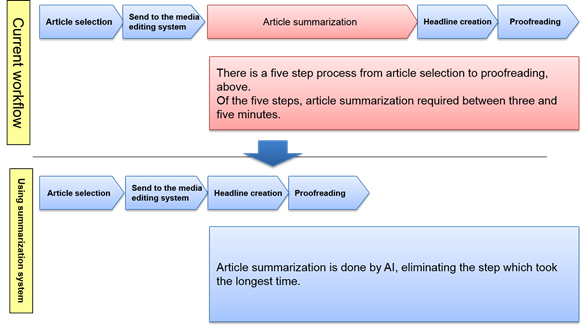 Going forward, Fujitsu will build summarization models optimized for a variety of different media with restrictions on word or character count, including news distribution for cable TV, news tickers on electronic billboards and social media, creating an automated article summary system that supports a variety of media. In addition, in order to make this technology easy to utilize in a variety of industries outside media, Fujitsu aims to make this technology available as a general-purpose AI function in the form of an API offered on the Fujitsu Cloud Service K5 Zinrai Platform Service.