The rapidly growing prevalence of electric vehicles has created demand for onboard power modules to control high-voltage electric power with low power demands of their own and high breakdown voltage, while at the same time needing to maintain reliability despite the high-temperature operations that come with compact modules. Silicon carbide (SiC), which has low power consumption and a high breakdown voltage, is being used as an alternative for silicon, but in order to operate reliably at temperatures of 200°C or higher, heat needs to be removed efficiently from SiC devices.

Fujitsu Laboratories has now developed a process for manufacturing carbon nanotubes, a material known for its high thermal conductivity in a cylindrical structure, and in which the combination of process temperature and pressure is precisely controlled to grow dense, uniform arrays of perpendicularly oriented carbon nanotubes. In order to be used for removing heat from SiC power modules, Fujitsu Laboratories has also developed a sheet-forming technology in which oriented-growth carbon nanotubes are subjected to heat treatment at temperatures above 2000°C, creating sheets that are easy to transport. Heat-dissipation sheets made using these technologies have about three times the heat-dissipation performance of existing materials made using indium, and have been found to have the world's best heat-dissipation performance among carbon-nanotube sheets.

Fujitsu Laboratories plans for this technology to be used in automotive heat-dissipation materials from fiscal 2020, and is considering to expand business into new areas, such as in applications for next-generation high-performance computing and telecommunications equipment.

Details of this technology are being presented at the 2017 Workshop on Innovative Nanoscale Devices and Systems (WINS2017) in Hawaii from November 26 through December 1.

With environmental regulations around the world in order to limit CO2 emissions, electric and hybrid vehicles are expected to become ever more prevalent. The power modules that these vehicles use to control their electricity have been built using silicon devices, but there has been a search for alternative materials that will offer better electrical efficiency in order to achieve driving ranges on par with gasoline-powered vehicles. For that reason development has been moving forward on SiC that is usable high-voltage and high-temperature environments, and that uses less power, as one material that would be an alternative to silicon. At the same time, high-thermal conductivity and temperature tolerance in peripheral components that also include thermal dissipation materials are also in demand, as they can efficiently cut heat from SiC elements that run reliably in conditions with high temperatures of over 200°C.

Carbon nanotubes are a type of nanotechnology material in which carbon atoms are formed into a cylinder with a diameter of a few nanometers. They have attracted attention for thermal conductivity that is 10 times better than copper and have a current-density tolerance 5,000 times as great, and development of applications is advancing. Equipping nanotubes on vehicles as a next-generation heat-dissipation candidate material is demonstrating promise. (Figure 1)

Carbon nanotubes have high thermal conductivity, which would seem to make sheets of them useful as a heat-dissipation material. However, making good use of their inherent characteristics still poses problems, and only simple applications were possible, such as combining them with existing materials.

1. Cylindrical carbon nanotubes are formed on a substrate in a manufacturing process called chemical vapor deposition, in which carbon is supplied in gas form and grows in a nanotube around metallic particles with diameters of a few nanometers, which act as seeds. Here, the variation in size of the catalyst particles, the density of the supplied gas, and the variation in temperatures across the surface of a substrate or between substrates lead to a lack of uniformity in multilayered tube length and density, especially when formed over a large area, such as a large substrate. This requires constant attention to maintain consistent synthesis conditions in the manufacturing process.

2. Because the carbon nanotubes formed on a substrate are not stable and do not maintain their shape when separated from the substrate, sheet-forming methods are typically used in which they are mixed with a fixing agent, such as resin or rubber. But fixing agents, which have low thermal conductivity, reduce the temperature tolerance and conductivity of the sheet. So it becomes necessary to increase the strength of the sheet without using fixing agents.

Two technologies resulted in the development of carbon nanotube sheets with high thermal conductivity, compared to that of conventional materials, at a rate of 80 watts per meter-kelvin (W/mK), even when including contact resistance.

The newly developed technologies are as follows.

Fujitsu Laboratories developed a technology in which the carbon nanotubes thus formed are heat treated at temperatures above 2000°C, maintaining the tube array in an orientation with high thermal conductance while forming it into a sheet. This made it possible to create a pure carbon nanotube sheet with high thermal conductivity and heat tolerance without the use of fixing agents, such as resin or rubber. 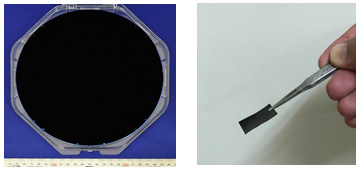 Figure 2: Image of multi-walled carbon nanotubes synthesized all over the surface of a 200-mm silicon substrate (left) and carbon-nanotube sheet (right). 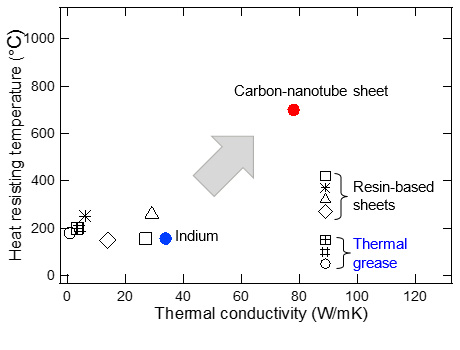 A carbon-nanotube heat-dissipation sheet created by this technology was found in actual measurements, with contact resistance taken into account, to have roughly three times the thermal conductance of indium sheets, an existing material known to have high thermal conductivity. (Figure 3) Furthermore, indium sheets have a melting point of approximately 160°C, but this heat-dissipation sheet was found to have a high heat tolerance of more than 700°C. These characteristics enable the efficient cooling of power modules in advanced electric and hybrid vehicles.

Fujitsu Laboratories will further improve the thermal conductivity of carbon-nanotube heat-dissipation sheets, and pursue development for commercialization with the aim of having sheet products for vehicles from fiscal 2020. The company will also consider expanding the business into new areas, such as in applications for next-generation high-performance computing and telecommunications equipment.