Fujitsu Laboratories Ltd. today announced that it has developed its "ConnectionChain," a security technology that can safely and easily execute exchanges and payments in different virtual currencies.

Fujitsu Laboratories will continue expanding this technology beyond currency exchange to areas such as high-trust data exchanges between companies and contract automation, while also continuing to conduct trials in a variety of fields, with the goal of commercialization in fiscal 2018 and beyond.

Without a central authority, blockchain offers high usability and guaranteed reliability due to being resistant to modification. It is therefore expected to be widely used in a number of fields, including finance and distribution. For this reason, it is said that around 2020, numerous blockchains will be set up across a range of fields. In addition, as applications in the financial field, there are ICOs in which companies and individuals sell virtual currencies to raise capital, as well as the issuing of proprietary virtual currencies by financial institutions. As a result, the volume of virtual currency being issued is skyrocketing, and it is expected that demand will increase for solutions that can handle transfers between these sorts of virtual currencies or data exchanges managed by blockchains.

With services to exchange virtual currencies or other assets, existing smart contracts merely execute transactions or contracts automatically and operate only within the limited scope of a single blockchain.

There were two major issues when executing exchanges across multiple blockchains, as follows (figure 1). 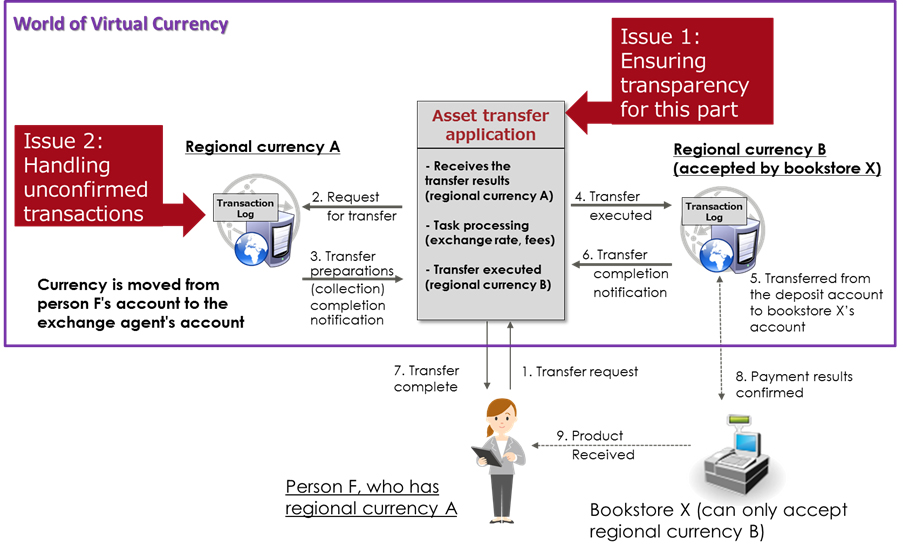 1. The need to ensure transparency in the application located between the blockchains, which handles the processing for things like the exchange rate and handling fees.

2. The need to control transaction timing across multiple blockchains, and to deal with them as a single continuous series.

Details of the technologies are as follows.

Fujitsu Laboratories has enhanced the capability of smart contracts, which automate contract processing and the handling of such tasks as placing orders and payments, to also be able to handle processes involving multiple blockchains.

By inheriting capability of the blockchain on handling the linking and task processing, rather than trusting to an application, operators can ensure the transparency and confirm the accuracy of the processing. 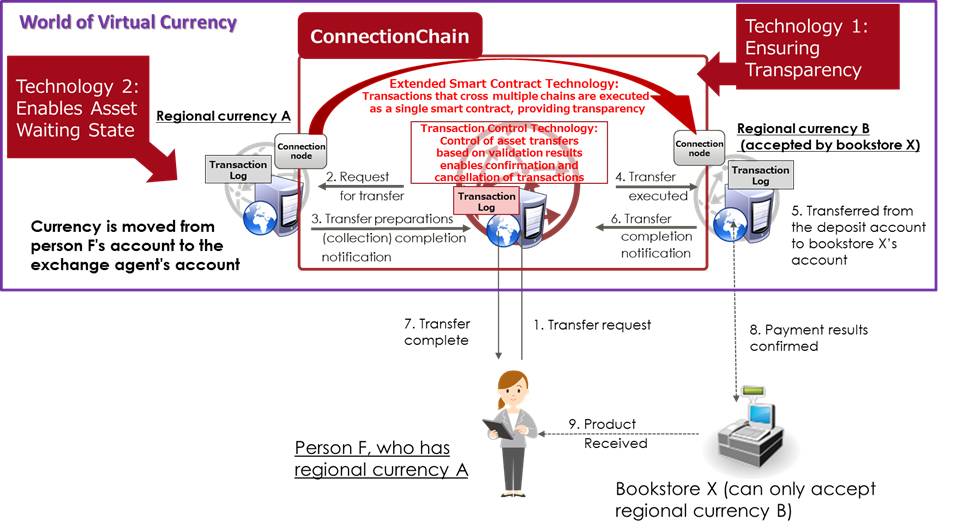 In a trial that used this technology in a simulated virtual currency exchange system, Fujitsu Laboratories interconnected two blockchains using different architectures to a system for exchanging proprietary virtual currencies, and executed asset transfers by exchanging virtual currency. The results confirmed that the transaction records relating to an asset transfer, including the transaction IDs on each blockchain, the amount of assets transferred, and the results of those transactions, were recorded on ConnectionChain as a single transaction (figure 3, left). In addition, if a transaction across blockchains were to fail while in progress, for reasons such as an inability to pay or settle, Fujitsu Laboratories also confirmed that the ID and timestamp for the transaction process that returned the assets on hold to their original owner was recorded (figure 3, right).

This technology will make it easy for small businesses, such as small-scale online shops that might be operated by a single person, and which accept virtual currencies, to support new regional currencies, and it also enables the operator to freely define exchange rates, enabling initiatives such as preferential exchange campaigns for users who hold a particular virtual currency.

Fujitsu Laboratories aims to expand this technology beyond currency exchange to areas such as high-trust data exchanges between companies and contract automation, while also continuing to conduct trials in a variety of fields, especially in finance, with the goal of commercialization in fiscal 2018 and beyond.