The PRIMEQUEST 3000 series adopts the latest processors, with up to 28 cores per CPU and support for up to 8 CPUs (224 cores). Memory capacity has also been expanded to a maximum of 12 TB, and compared to the previous series, processing performance has been increased by up to 50%(1). Moreover, this new series can support up to 32 TB of NVMe SSDs, the latest storage connection standard, leading to an improvement in large-scale database access performance. By reducing the number of components, weight has been reduced by up to about 30% compared to previous models, and the size of the chassis has been reduced from the previous 10U down to a 7U rack unit, while total power consumption remains equal to or below previous models, despite an increase of up to 24% in CPU power consumption.

With these improvements, this new series offers even greater performance than the previous series, while continuing to offer high reliability and usability. Fujitsu will continue to contribute to its customers' businesses by offering these products, effectively delivering high processing performance for database systems and in-memory computing to respond to corporate data utilization needs, which are gathering momentum with the development of IoT. 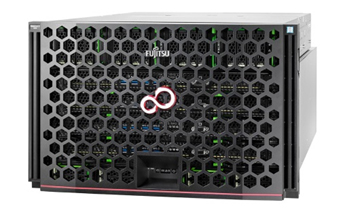 As the environment surrounding customer businesses changes, whether it be through increased global competition, cross-industry participation, or the increasing segmentation of market needs, digital transformation holds an important key to the creation of new businesses and further continued growth. There has been a significant increase in momentum for the deployment of ICT infrastructure that can support a wide variety of business areas, not just for corporate mission-critical systems and societal infrastructure, which require high reliability, but also for emergent fields such as IoT, which create added value for business using huge volumes of data.

Now, with the newly launched PRIMEQUEST 3000 series, Fujitsu delivers strong support for its customers in the optimization of their ICT environments and business by massively increasing performance through a variety of means, including the adoption of the latest processors and NVMe SSDs, the latest storage connection standard, as well as offering increased memory capacity.

*The PRIMEQUEST 3400E and PRIMEQUEST 3800E are also available for order in Japan and all regions worldwide. An announcement from Fujitsu Technology Solutions was made on November 6.
*The other four models are available for sale only in Japan.

Features of the PRIMEQUEST 3000 Series

1. Equipped with the latest processors, contributing to accelerated customer operations

This series offers the latest server-focused processors from the Intel® Xeon® processor Scalable family, and can be configured with up to 8 Intel® Xeon® Platinum 8180M CPUs (224 cores), which offer the highest level of performance with an operating frequency of 2.5 GHz and 38.5 MB of L3 cache. The PRIMEQUEST 3800E enterprise model, which comes equipped with 8 CPUs, provides up to a 50% improvement in computational performance and up to a 30% improvement in application execution performance, compared to the PRIMEQUEST 2800E3, the previous model.

In addition, because memory capacity can be expanded to a maximum of 12 TB (max. 1.5 TB per CPU), these servers contribute to speeding up customer operations by adjusting memory to suit CPU performance.

This series is capable of supporting up to 32 TB of ultra-high-speed SSDs using NVMe, the latest storage connection standard. Using these high-capacity NVMe SSDs as the cache for a database improves access performance for large-scale databases, meeting the data utilization needs of customers, such as the analysis of large volumes of data.

Fujitsu has not only reduced the size of the chassis from the previous 10U to 7U in rack units, it has also enhanced the server with mainframe-class high reliability, high usability technology gained through a highly reliable design with thorough redundancy for hardware components, and highly usable functionality that can autonomously recover the system, if something were to happen, with an included backup system board. The new series has enhanced the recovery performance of the backup system board, with the aim of greatly reducing the time between a problem occurring and recovery.

Pricing and Availability of the New Models