Successfully predicts ship performance at high accuracy; margin of error under 1.5%, according to trial with ship's operational data in actual sea conditions

Fujitsu Laboratories Ltd. today announced that it has conducted a trial of a ship performance estimation technology(1) together with Mitsui O.S.K. Lines (MOL) and Ube Shipping & Logistics, Ltd. Developed by Fujitsu Laboratories and Tokyo University of Marine Science and Technology (TUMSAT), the technology can predict figures such as ship speed and fuel consumption. The results of the trial showed that the technology is capable of estimating ship performance with an estimated margin of error under 1.5%, both on the ocean and near the coast, and in a variety of weather and wave conditions. With this technology, it is possible for operators to accurately predict ship courses that will reduce fuel consumption, leading to lower fuel costs.

Fujitsu Limited will include this technology as an option in Fujitsu Mobility Solution SPATIOWL, a cloud service that utilizes location information, aiming to offer the service in 2018.

Details of this trial will be exhibited at the 2017 Fujitsu Forum Munich, to be held November 8-9.

If maritime companies can get an accurate handle on ship performance, including changes to ship speed and fuel consumption due to weather and ocean conditions, they can plot optimal ship courses in response to such conditions along the route (this technique is called "weather routing"). For example, companies can know in advance if a slight deviation from the shortest route could actually improve fuel consumption as it avoids strong wind and waves (figure 1). In May 2016, Fujitsu Laboratories worked with TUMSAT to jointly develop technology that could estimate a ship's performance with high accuracy. Fujitsu Laboratories' proprietary high-dimensional statistical analysis technology utilizes Fujitsu Human Centric AI Zinrai, Fujitsu's AI technology, to produce highly accurate estimates. 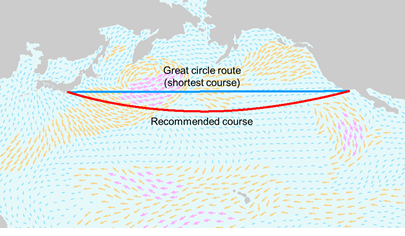 Fujitsu Laboratories confirmed that this technology was highly accurate with estimating ship performance, through trials using operational data collected by TUMSAT's small training vessels in Japanese waters. As part of commercializing this technology, however, it was necessary to test estimation accuracy against operational data from actual commercial ships at sea, in more varied weather and ocean conditions.

Details of the Technology Trial

Now, with technical assistance from TUMSAT, Fujitsu Laboratories' high-dimensional statistical analysis, using operational data collected from commercial vessels in actual operation by MOL and Ube Shipping & Logistics, was the basis for prediction of speed and fuel consumption of the vessels, and testing performed for the margin of error compared to actual results (Figure 2).

The operational data used in this trial is as follows. 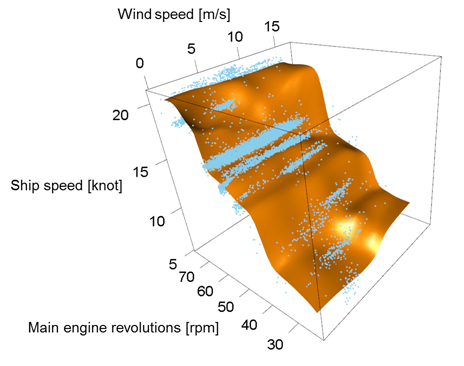 Methodology of the Technology Trial

A total of 90% of the sample data was selected at random from the total amount of operational data used in the trial as training data. The remaining sample data was used as test data to calculate the mean absolute percentage error (MAPE), an index of error calculated using the formula below. In this evaluation, T refers to the number of samples of the test data, and t shows the number of the given individual sample within T, xt gives the value of the input data used to make prediction number t in the sample, while f(xt) gives the predicted value for ship speed or fuel consumption based on xt, and yt gives the actual value for ship speed or fuel consumption for sample number t. This error evaluation was repeated ten times, and the average of those results was taken as the estimated error rate compared to actual results.

Results of the Technology Trial

The results of this trial confirm that this technology can predict ship performance with an estimated margin of error under 1.5% (table).

A portion of the trial results for ship speed and fuel consumption are shown in figures 3 and 4. Figures 3(a) and 4(a) are time-series graphs of actual values and predicted values, showing them as almost identical, confirming high prediction accuracy. In addition, figures 3(b) and 4(b) show the distribution of actual values and predicted values. As shown in the figures, most of the data points are clustered near the red line, confirming that this technology provides stable prediction accuracy.

By using this technology to accurately comprehend the ship's performance in actual sea conditions, users can improve weather routing precision and contribute to lower fuel consumption.

Fujitsu Limited will include this technology as an option in Fujitsu Mobility Solution SPATIOWL, a cloud service that utilizes location information, aiming to offer the service in 2018.