In computations using annealing methods, there is a tradeoff between the speed with which the method converges on a solution and the accuracy of the solution. For this reason, it was necessary to spend a few weeks, depending on circumstances, finding parameters that could deliver a solution of sufficient precision in a short time for each type of problem being handled.

Fujitsu Laboratories has now developed technology that makes it possible to find a solution of sufficient precision without the need to set complicated parameters by incorporating circuits that automatically control parameters based on the results of observations of the conditions within the Digital Annealer during performance. Fujitsu Laboratories has confirmed that this can reduce the preparation time before applying the Digital Annealer to a problem from about two weeks to less than a day, for problems such as comparing molecular similarities when searching for new materials or for investment portfolio optimization. With this technology, it has become possible to rapidly respond to the variety of combinatorial optimization problems that occur in the real world.

Fujitsu Laboratories plans to commercialize this technology in the first half of 2018, contributing to the creation of new business by applying it to a variety of fields, including chemistry, finance, energy, and distribution.

The demand for the ability to choose the optimal solution from a number of various feasible solutions exists in numerous real-world fields. This sort of demand is classified as what are called combinatorial optimization problems. Combinatorial optimization problems can be difficult to solve quickly with existing processors, as the number of combinations would increase exponentially when the number of factors taken into consideration was increased.

Annealing methods can be compared with a process in which a metal is heated to a high temperature, and then allowed to cool very gradually, causing the crystalline structure of the material to converge on an optimal state. By lowering the temperature, which in this example is controlled by the parameters, from a high point very gradually, the area in which to look for a solution is gradually narrowed down, finding the point of lowest energy. To rapidly locate this state, one can achieve an optimal degree of precision in the solution if the parameters are operated in a similar way to the gradual lowering of the temperature, but this increases computation time, whereas if the parameters are operated in a similar way to quickly lowering the temperature, the computation time becomes shorter, but the precision of the solution decreases, creating a tradeoff. The optimal values for the setting of these parameters, including both the initial values and the way they are changed during operation, varies for each type of problem for which these methods are applied.

When using annealing methods for problems for which they've never been applied before for the first time, such as comparing molecular similarity(2) and portfolio optimization(3), finding optimal parameter settings to begin with for each type of problem enables rapid computation for problems of that type thereafter. However, in order to find the optimal parameter settings to find a sufficiently precise solution in a short timeframe, annealing computation that changes the parameter settings could need to be repeated tens of thousands of times or more which could take a few weeks.

To expand the fields to which its Digital Annealer is applicable, Fujitsu Laboratories has now developed new technology to simplify use by eliminating the need to set complex parameters in advance.

With this technology, the multiple basic circuits within the Digital Annealer that handle optimization processing can be given simple initial parameters and operated in parallel. Moreover, status control circuits installed outside the basic circuits will observe the status during performance of each basic circuit at a set frequency, enabling an efficient search for an optimal solution by adjusting the parameters as appropriate. Fig. 1: Process of applying the previous Digital Annealer to new types of problems 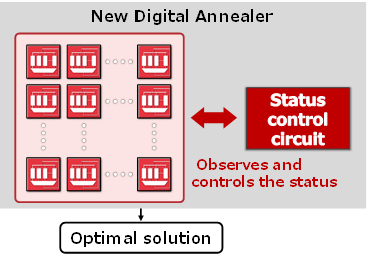 With this technology, users will be able to find an optimal solution with high probability without setting complex parameters in advance. For this reason, tuning tasks that previously had to be done manually, taking up significant time, have become unnecessary, and users can start operations using actual data, drawing out the full performance of the Digital Annealer in a short period of time, with the capability to shorten preparation times by somewhere between one tenth and one hundredth.

Now, using software developed by 1QBit (1QB Information Technologies Inc.)(4), Fujitsu Laboratories evaluated the effectiveness of this technology for problems on the scale of actual use cases in the chemistry and finance fields. The results showed that, for molecular similarity comparison problems of below 50 atoms (chemistry), and a portfolio optimization problem for 500 stocks (finance), this technology was confirmed to be able to shorten the preparation period required to find a solution of the necessary precision from the previous requirement of about two weeks to less than a day. 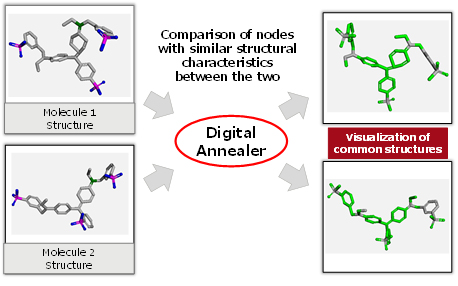 Fig. 3: Example application to a molecular similarity comparison problem of about 50 atoms 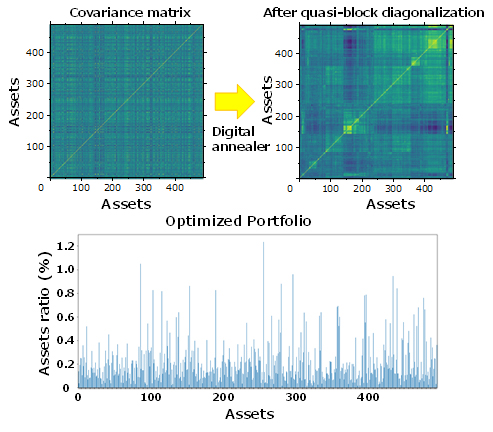 Fujitsu Laboratories aims to commercialize this technology in the first half of 2018, contributing to the creation of new business for customers in a variety of applicable fields, such as chemistry, finance, energy, and distribution.