Currently, in datacenters, the number of servers mounted to a rack is limited by the total rated electrical power of the servers, which must be less than the power supply of the rack. However, often times, server load is low, at approximately 10% to 50%, and power usage for each rack proportional to load is also low compared to the rated power, leading to racks with low server mounting density. Now, in order to increase server mounting density, Fujitsu Laboratories has developed technology that enables efficient server placement by setting up a partition made up of backup servers in the datacenter, and migrating VMs to the backup partition based on the physical distribution and power consumption of the virtual machines.

With this technology, for racks that are running virtual servers, datacenters can reduce their space usage by increasing mounting density. Fujitsu Laboratories has calculated that in a case where server rack operational efficiency(1) was increased to 90%, space usage could be reduced by 40%.

Details of this technology were presented at IEEE Cloud 2017, an international conference currently being held in Honolulu, U.S., from June 25-30.

As the number of servers installed in datacenters continues to rise and its further increase is expected with the growth of AI and IoT systems going forward, there has been a demand for ways to increase server mounting density within the bounds of limited space and power.

In datacenters, when installing servers in a rack, the number of servers is decided based on the rated power usage of each server, so as not to exceed the rack's power supply. However, often times, server load is low, at approximately 10% to 50%, and power usage for each rack proportional to load is also low compared to the rated power. Being this low creates a demand to raise mounting density.

In response to this demand, in recent years a "power capping technology" has been developed which monitors the actual operational status of servers in racks that mount a number of servers in excess of their power supplies. If that power supply is about to be exceeded, the technology limits the operational frequency of servers to suppress power consumption. This technology, however, could not be used for applications that require a specified level of processing performance, such as mission-critical applications.

Now Fujitsu Laboratories has developed a VM control algorithm that first installs physical servers in racks at high density in a datacenter and then establishes a back-up partition, using the migration functionality of the VMs to move them depending on the power consumption of each server. In this way it prevents each rack from exceeding its amount of power supply.

Virtual datacenters built with VM management software have physical servers split into theoretical management units called clusters. The physical servers within a cluster can be mounted into different racks, with no physical limitations. VMs are automatically migrated between clusters when a physical server stops operation due to a fault or when it undergoes maintenance. The actual physical layout of the servers, however, is not always taken into account.

Fujitsu Laboratories has now developed a technology that prevents racks from exceeding their power supplies. Using an API that can be used in normal datacenter management, the company will build a database related to the physical distribution (the operational partition) of servers that provides services as well as the physical distribution of the backup partition that the VMs will be migrated to as it approaches its power supply limits. Then, the continually changing power usage volume collected from the servers will be linked to their serial number and rack number (Figures 1 and 2). This technology enables datacenter operators to increase the mounting density in the operational partitions, reducing space usage. 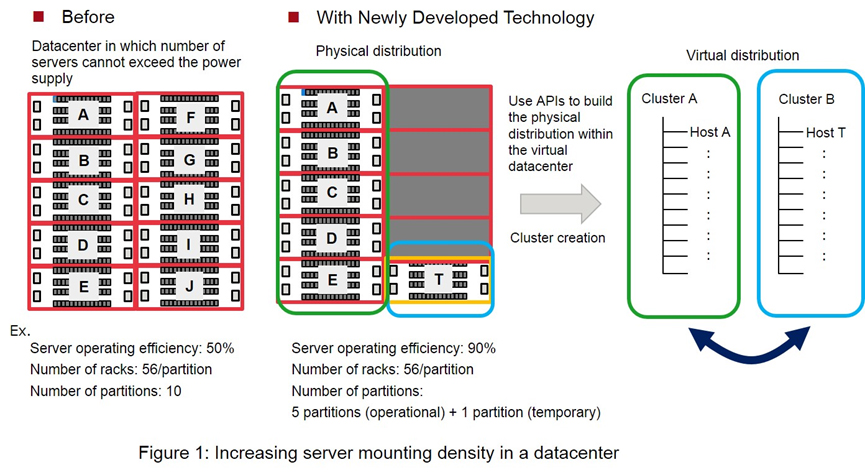 2. Technology to set installation rules based on actual operational data

Frequent migrations will occur if server mounting density is increased exceedingly, so an appropriate balance is necessary between migration frequency and server load commensurate with power volume. Fujitsu Laboratories has now developed a technology to determine the number of servers that should be mounted on a rack by statistically estimating the frequency of migrations for each rack, based on the pre-measured load per server, assuming that changes in the load follow the normal distribution (Figure 3). If the center of the normal distribution is a server load of 30%, for example, by installing servers based on a power usage value for 50% load, this would account for 95.5% of changes in load, enabling a maximization of server mounting density.

By applying this technology, Fujitsu Laboratories expects that it will be possible to increase the mounting density of servers in datacenters, significantly reducing installation space. By using this newly developed technology, for example in a cloud service where changes in load can be predicted with a normal distribution, a datacenter operating with ten partitions at a server rack operating efficiency of 50% would be able to reduce space usage by 40%, with now five partitions and a server operating efficiency of 90%.