Fujitsu Laboratories Ltd. today announced the development of circuit technology to improve the energy efficiency of hardware used for deep learning, without changing network structures or training algorithms, by reducing the bit width of the data used in deep learning processing.

Now, Fujitsu Laboratories has developed a computational algorithm-driven circuit technology that has a unique numerical representation that reduces data bit width used in computations, and based on the characteristics of deep learning's training computations, automatically controls the location of the decimal point position according to the statistical information of the distribution in order to preserve the computational accuracy sufficiently necessary for deep learning.

In this way, in the learning process, the compute unit's bit width and the bit width of the memory that records learning results can be reduced, and energy efficiency can be enhanced.

Details of this technology are scheduled to be announced at xSIG 2017 (The 1st. cross-disciplinary Workshop on Computing Systems, Infrastructures, and Programming), being held at the Toranomon Hills Forum (Minato-ku, Tokyo) April 24-26.

A topic of discussion in recent years has been that with the spread of IoT, the number of devices connected to the network is increasing dramatically, and that by 2020, tens of billions of devices will be connected. The result will be the generation of staggering amounts of data, although in many cases it will have no meaning as is. The value of this data will have to be extracted using machine learning methods, such as deep learning, which is expected to create new insights.

With the increase in training data from IoT and the expanding scale of deep neural networks, the performance requirements for servers used for deep learning have only been increasing. In addition, in order to reduce the communications volume necessary for transmitting data and the storage volume necessary for recording it, there is a growing need to handle deep learning not only in the cloud, but also at the edge, close to the places where the data is generated.

Because servers used for deep learning, both in the cloud and at the edge, have power limits, forecasters expect that it will become difficult to increase performance simply by increasing scale, making technologies that raise energy efficiency necessary.

The hardware used in ordinary deep learning uses a data format called 32-bit floating-point representation for processing calculations. By reducing the bit width of data used in calculations to 16 bits or less, or using hardware that uses integer operations for calculations, the volume of calculations can be reduced, increasing energy efficiency. At the same time, however, this can lead to a lack of the accuracy necessary for these calculations, making deep learning impossible or degrading the recognition capability of the neural network.

Fujitsu Laboratories has now developed circuit technology, based on integer operations, that improves energy efficiency by reducing the data bit width of the compute units and the memory that records training results of deep learning, using a unique numerical representation to reduce bit width. The computational algorithm controls the location of the decimal point in order to preserve computational accuracy while analyzing the distribution of the data for each layer of a deep neural network. Both are specialized for the deep learning process.

In the computational cores of the hardware used for deep learning using this technology, there is a block devoted to analyzing the data being calculated (1), a database that stores the distribution of the analyzed data (2), and a block that preserves the calculation settings (3) (Figure 1). In the data analysis block, the data output of the compute unit is analyzed in real time during the training of neural networks, and that analysis is stored in the database as statistical information showing the distribution of the data. That distribution is used to configure compute unit settings, so that it can preserve sufficient computational accuracy in order to improve training accuracy (Figure 2). 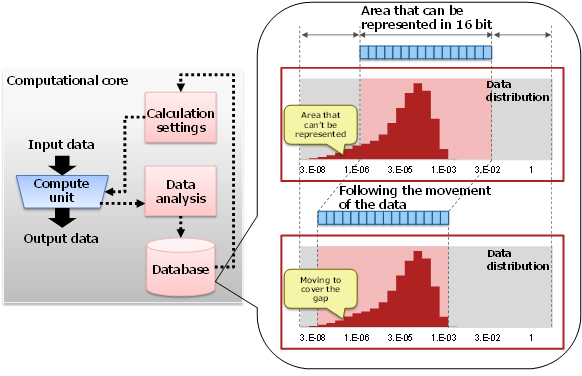 Fujitsu Laboratories plans to work with customers on AI applications, with the goal of commercializing this technology as part of Human Centric AI Zinrai, Fujitsu Limited's AI technology, in fiscal 2018. It will also continue to develop circuit technology in order to further reduce the data volumes used in deep learning.