Fujitsu Limited and Fujitsu Client Computing Limited today announced the release of six new enterprise models across six product series. The new models are being rolled out in stages from mid-April in Japan.

In the Fujitsu Thin Client FUTRO series, Fujitsu is strengthening its lineup with the launch of the FUTRO MU937 mobile notebook device, the world's lightest, at a weight of just 799g(2).

The Fujitsu Group is supporting the operations of its customers across a variety of industries by expanding the functionality of its various product lines.

As part of its ARROWS Tab series of windows tablets, Fujitsu has launched the new ARROWS Tab Q507/P-SP, a 10.1" compact and light tablet featuring Slide Passport, a slide-style palm vein authentication functionality offering both strong security and convenience. With the simple action of sliding your hand along the guides displayed on the tablet's touchscreen, the small slide-style palm vein sensor installed in the tablet's frame will read and authenticate the pattern of veins in your hand. The technology in this sensor was developed by Fujitsu Limited and Fujitsu Laboratories Ltd., and by adopting an 8mm optical unit that Dai Nippon Printing Co., Ltd. has been able to mass produce, it became possible to mount it in the narrow frame of a tablet. In addition, the tablet features both water resistance (IPX4) and dust resistance (IP5X)(3), enabling use in a variety of business situations.

2. Enhanced both the LIFEBOOK series of notebooks and the ESPRIMO series of desktop PCs

Fujitsu has enhanced its lineup with one new model in its LIFEBOOK series and two new models in its ESPRIMO series, offering the latest seventh generation Intel Core processor family in the 13.3" LIFEBOOK S937/P ultra-mobile notebook, the multifunction ESPRIMO D587/R desktop model, and the ultra-small ESPRIMO Q556/R desktop model.

Fujitsu has expanded its lineup of mobile notebooks in the CELSIUS series of workstations, launching the 17.3" CELSIUS H970 mobile workstation, featuring either the latest seventh generation Intel Core processor family or the Intel Xeon E3-1500 v6 family. Because it can be equipped with the NVIDIA Quadro P4000, the latest 3D graphics card supporting the VR Ready logo, the workstation can quickly and easily handle applications such as the latest CAD, CAE(4), and analytical simulations. With a large, 17.3" screen and top-level graphics performance, this workstation offers a pleasant, stress-free work environment, even on the go. 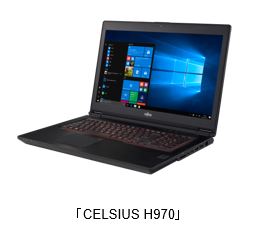 Fujitsu is launching the world's lightest 13.3" mobile thin client, the FUTRO MU937, offering increased portability, with a weight of 799g and thickness of 15mm. Despite its extremely light body, it has cleared several strict tests, including pressure durability testing and drop testing(5), offering both lightness and toughness. On the security front, in addition to the fingerprint sensor included as standard, it can also include a palm vein sensor (PalmSecure series) by custom order. By offering astonishing mobility and strong security, Fujitsu is supporting initiatives to transform how people work. 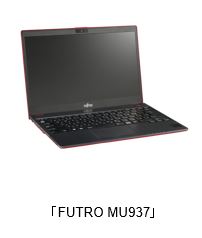