Fujitsu today announced that it has built "JAXA Sphere," a new communication platform based on Office 365, Microsoft's integrated information sharing cloud service. This works to provide an environment that more efficiently and flexibly supports strengthened coordination among employees of the Japan Aerospace Exploration Agency (JAXA) and the agency's R&D activities. All JAXA employees and the employees of its partners (companies and cooperating organizations that carry out operations at various JAXA facilities) began using this platform in January 2017.

JAXA Sphere is a platform that stimulates real time communication between employees, enabling smooth coordination through online meetings, joint document editing functionality, and an understanding of who is present at work. The platform supports improvements in the speed and efficiency of business processes and R&D. Fujitsu has built a communication platform based on Office 365 that provides overall optimization, through a system design that takes into consideration the flow and routing of email transmission and reception which are comprised of multiple systems, as well as a network design that ensures security.

Going forward, Fujitsu will continue to leverage its information and communication technology (ICT) to support new ways of working in JAXA's operations and R&D.

All JAXA employees, about 1,500 people, as well as the employees of the partners (companies and cooperating organizations) who participate in operations at all of JAXA's 23 locations in and outside Japan, have access to JAXA Sphere at any time, from anywhere. The system enables efficient progress in business and R&D without regard to time and place, because members of a group can hold meetings and discussions online and work together to create or edit materials without gathering in one place.

In addition, because it provides functionality to check the presence of any employee based on the status of their PC, as well as an instant messaging function to easily send messages, the system promotes active communication not only within units, but between locations. With JAXA Sphere, JAXA aims to promote efficient and flexible ways of working and R&D. 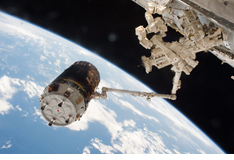 1. Provides a system design that makes use of Fujitsu's own in-house deployment experience and knowledge of JAXA's systems and work characteristics

As a communication platform for JAXA, the agency tasked with launching rockets, managing satellites, and supporting the International Space Station, it was critical to have a system design fine tuned to the special requirements of its operations, including security, reliability, and easy maintenance. Using its experience of deploying its own in-house communication platform, as well as its knowledge-developed over many years handling systems, such as JAXA's satellite control systems-of the special characteristics of JAXA's business and their unique network environment and data structure, Fujitsu offered a variety of proposals from the system concept stage that are reflected in the system design, including a network connection method that offers strong security and an overall email delivery flow method. In addition, Fujitsu built the communication platform while considering system operation rules for events unique to JAXA, such as satellite launches, to limit their impact on business systems.

Using the experience from its own internal deployment in implementation support, Fujitsu worked to promote usage by setting up a user support site and preparing manuals that can be used at any time. It also held group training with JAXA's information systems department at six locations throughout Japan, including at Tanegashima Space Center to introduce hands on functionality demos, as well as by creating videos aimed at those who could not attend the group training or for use in iterative learning. Through these initiatives, and by building the system in just about five months, operations for all employees, both within and outside Japan, were migrated from the old system just eight months after construction began, supporting early adoption.

Using its experience from its internal communication platform implementation, Fujitsu is strongly supporting innovative activities at JAXA through meticulous support focused on the user.