Commencing innovative initiatives to strengthen digital business in the country

Fujitsu today announced that it is making a five-year investment of over 50 million euros (about 6 billion yen) to support digital innovation in France. The goal of the initiative, which is based on collaboration with the French government, is the development of new services and the acquisition of novel technologies. 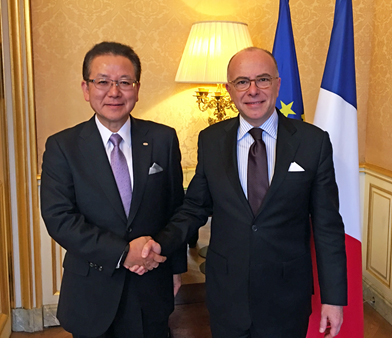 Bernard Cazeneuve, Prime Minister in France, says: "I welcome the engagement of Fujitsu, a world-class actor, which is further proof of France's economic attractiveness, the excellence of French research and the dynamism of French Tech."

Tatsuya Tanaka, President of Fujitsu Limited, says: "Fujitsu's vision is to create a Human Centric Intelligent Society by co-creating solutions with customers and partners. To achieve this, Fujitsu aims to grow the number of its partnerships with leading technology companies, research institutions and startups in France, to strengthen its digital business, to significantly increase the scale of its business and to expand its presence in the country."

François Fleutiaux, Senior Vice President and Head of Sales at Fujitsu in EMEIA, says: "France is a strategically important market for Fujitsu. This is not just because of the high percentage of businesses that see digitalization as a priority, but also for its extensive pool of highly talented mathematicians, digital engineers and its vibrant community of startup companies. We look forward to continuing to advance Artificial Intelligence, by co-creating technologies that will help enterprises embrace the benefits of digital transformation."

France is Europe's second largest economy and home to its greatest number of Fortune Global 500 companies, many of which have placed a priority on digital transformation. For this reason Fujitsu views France as a strategically important market as it expands its "connected services" globally. The company will apply its extensive knowledge in solutions, systems integration, and infrastructure services, to a wide variety of software that includes cloud and middleware. Fujitsu will then provide its customers with an integrated, end-to-end service. France also has a robust AI ecosystem including skills such as with machine learning and deep learning. Therefore Fujitsu plans for the country to be a key location to develop and expand its digital business.

Fujitsu and the French government, including Business France, the national agency supporting the international development of the French economy, have since July 2016 been in talks aimed at combining Japanese know-how and local French expertise, and to contribute to accelerating innovation in France.

1. Establishing a Center of Excellence (CoE)

Fujitsu will establish a CoE in Ecole Polytechnique's(1) incubator, Drahi X-Novation(2), which is at the heart of Paris-Saclay, one of the world's preeminent research and technology clusters and that focuses on innovation. From this, Fujitsu will expand the CoE as well as its connections to other innovation ecosystems all around the country.

The CoE will work with the Fujitsu Group's research and business development units involved in AI to bring technologies and services that spur innovation in customers' business, primarily in the fields of machine learning, deep learning, and natural language processing. Fujitsu will offer the solutions and services generated by the CoE through FUJITSU Digital Business Platform MetaArc, to serve customers in France, the EMEIA region and around the world.

In addition, the CoE will offer Fujitsu's IoT, digital marketing, security and other digital solutions to corporate customers, particularly in the retail and manufacturing fields.

Going forward, leveraging the CoE's activities, Fujitsu will place particular focus on predictive analytics and other data analysis technologies that lead to solutions to customer management issues, and will further support the digital transformation of French businesses and society.

A joint AI research program will be set up by Fujitsu and French research institute Inria(3) starting fiscal 2017(4). The joint research will merge Inria's science with Fujitsu's technologies and will accelerate the development of new AI learning technologies based on cutting-edge mathematics and computer science, with emphasis on the interpretation of IoT data, which poses many challenges for existing technologies. The results achieved through this joint research will be swiftly applied to the "Human Centric AI Zinrai" platform, the framework for Fujitsu's AI offering, and will work to contribute to customers and society.

Fujitsu already actively works with startups in France. In the past five years, it acquired RunMyProcess(5) and UShareSoft(6). The solutions provided by these companies have been strengthened and are being offered not only in France but also globally to Fujitsu customers through the MetaArc platform. In addition, Fujitsu has been collaborating with Scality(7) since November 2016 on a field trial of intercontinental data center coordination focused on cold data storage. In fiscal 2017, Fujitsu and Scality will expand this project, working with research institutions in France to create efficient scale-out object storage which enables international data sharing.

Also in November 2016, Fujitsu entered into a partnership with Bpifrance, France's public investment bank, and is continuing to move forward to identify and strengthen collaboration with promising French startups.

The CoE will provide opportunities to participate in actual development projects for startups housed at the Drahi X-Novation Center, where the CoE is located. It will also welcome the talented students and interns of Ecole Polytechnique, who will be offered the chance to participate in research based on actual and real-world business deals. This will actively contribute to the fostering of digital human resources in France. Beyond the current discussions with Ecole Polytechnique, Fujitsu looks to foster similar relationships with major engineering schools and universities that conduct research in France.

Toward Continual Development of Japanese-French Innovation