United Nations Development Programme (UNDP), International Research Institute of Disaster Science, Tohoku University (IRIDeS), and Fujitsu Limited today announced that the three organizations have agreed to form a partnership to build and operate a new global database, in the Global Centre for Disaster Statistics (GCDS), that will aim to reduce the damage caused by major natural disasters around the world.

Fujitsu will not only use its overall capabilities in ICT to support the construction of the global database, free of charge, it will also support its operation and the improvement of disaster prevention administrative capabilities in developing nations through donations.

Through the activities of this partnership, the three organizations are contributing to the building of societies that are prepared for major natural disasters.

In recent years, major natural disasters have frequently occurred in countries around the world, becoming a major obstacle to developing nations' sustainable development and economic and social growth. In particular there is a fear that a concentration of populations in urban centers is further increasing the risks of harm, demanding a reduction of that risk. At the Third World Conference on Disaster Risk Reduction, held in March 2015, the Sendai Framework for Disaster Risk Reduction(1) was adopted, in which UN Member States each country agreed to work to achieve seven targets by 2030, including reducing the number of disaster-related deaths, the number of disaster victims, direct economic losses, and damage to vital infrastructure.

In order to monitor the state of progress in achieving these goals, and evaluate their state of completion, it is necessary for each Member State to prepare certain basic statistical data on damage from disasters. For this reason, UNDP and IRIDeS established the GCDS in April 2015 to provide this data.

UNDP guides the collection of disaster data, information disclosure, and policy making in developing nations. IRIDeS stores the statistical disaster data collected by Member States in the GCDS, performs data analysis, and provides disaster prevention advice to each State through UNDP. Fujitsu will use ICT to support the improvement of disaster prevention capabilities in developing nations through the GCDS. The three organizations will work together as a partnership toward the achievement of the goals laid out in the Sendai Framework for Disaster Risk Reduction.

In this partnership, Fujitsu will provide its FUJITSU Cloud Service K5 to the global database the GCDS is building, establishing a platform for the accumulation of statistical disaster data. Moreover, Fujitsu will support the effort with database design and construction operations at no charge. This support is valued at up to about 300 million yen. In addition, Fujitsu will contribute approximately 47 million yen over the next three years to support the activities of UNDP and IRIDeS in improving disaster prevention administrative capabilities in developing nations. In addition to creating a disaster damage statistics database for six developing nations in Asia by 2019, this effort will be expanded to twenty nations in the Asia-Pacific region from 2020 and beyond, contributing to reducing the damage from major natural disasters around the world. 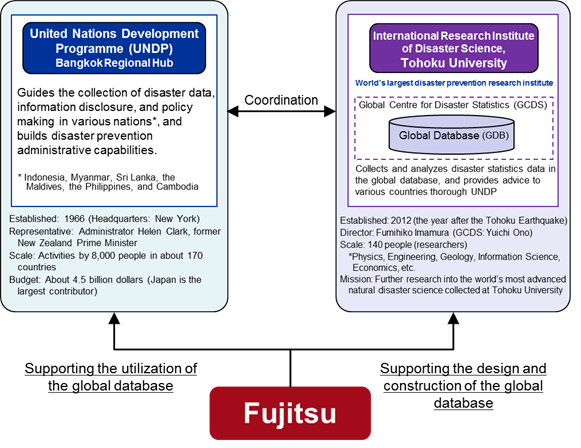 UNDP works in nearly 170 countries and territories, helping to achieve the eradication of poverty, and the reduction of inequalities and exclusion. We help countries to develop policies, leadership skills, partnering abilities, institutional capabilities and build resilience in order to sustain development results. UNDP focuses on helping countries build and share solutions in three main areas:Sustainable development, Democratic governance and peacebuilding and Climate and disaster resilience. In all our activities, we encourage the protection of human rights and the empowerment of women, minorities and the poorest and most vulnerable.

Tohoku University was established in 1907 as Japan's third national university, and is ranked among its leading universities, with its five main campuses in Sendai city. The International Research Institute of Disaster Science (IRIDeS) was founded in 2012, as Tohoku University's newest research institution. Learning lessons from the 2011 Great East Japan Earthquake, about 100 researchers in fields in the humanities, sciences, engineering, and medicine, endeavor to invent a deeper disaster science and more practical research on disaster risk reduction. Making efforts in forging links with industry, government, academia, and citizens in Japan as well as abroad, IRIDeS aims at both the revival of Tohoku disaster areas and the reduction of disasters worldwide. For more information, please see: http://irides.tohoku.ac.jp/eng/index.html