With conventional technology it is possible to build "virtual network infrastructure" within one individual cloud or corporate location using Software Defined Networking (SDN) technology. However, when building virtual network infrastructure spanning multiple clouds and locations, not only are the setup methods different for each cloud and location, it is also necessary for a skilled engineer to take time to configure settings for connecting each part of the IT infrastructure individually.

With this technology, it is now possible to build and operate networks in response to user or application requirements, contributing to the creation of virtual networks across multiple IT infrastructures that support a variety of services in the era of 5G mobile communications, IoT, and the cloud.

Details of this technology were announced at the Technical Committee Conference on Network Systems, held March 2 in Okinawa. This technology will also be on display at the upcoming Fujitsu North America Technology Forum (NATF) 2017, an exhibition to be held March 9 in Santa Clara, California.

In anticipation of an era in which 5G mobile communications and IoT technology become increasingly widespread, there has been a demand for technology that can efficiently provide a variety of services in the cloud in response to diversified needs and requirements.

With SDN and other technology for virtualizing computer resources, and through the development of virtual network infrastructure that extends from IoT devices, smart devices, and PCs to the cloud for each service as needed, it is now possible for cloud service providers to securely and efficiently provide their services, independent of the physical infrastructure. These technologies are beginning to be used, for example, in delivering large volumes of data from IoT devices to the cloud, and analyzing that data for use in a variety of fields, or in flexibly building enterprise networks in response to changes in corporate organization. There has been a demand with this sort of virtual network infrastructure for the ability to quickly respond to changes in service needs and requirements that continually arise. 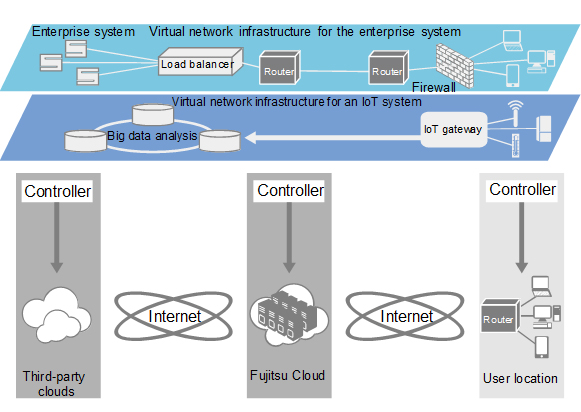 Figure 1: Virtual network infrastructure extending from devices to the cloud 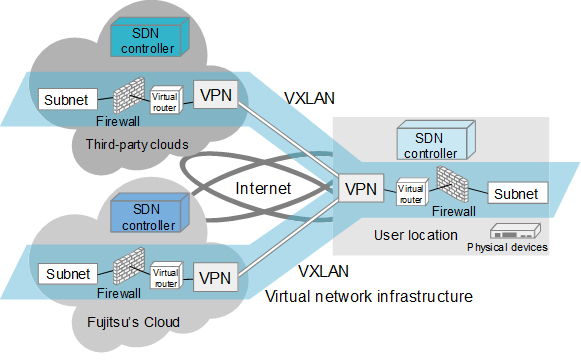 Fujitsu Laboratories and Fujitsu Laboratories of America developed a technology that models structural elements of IT infrastructure using logical software components to enable key features such as element configuration and operational status monitoring. Using this technology, users can automatically build virtual network infrastructures across multiple instances of IT infrastructure based on the logical network designed by the user. In addition, enabling operations and fault response management of virtual network infrastructures, lifecycle management (design, configuration, operations, and fault response), can also be done on the logical network.

This technology focuses on the connection between the structural elements of the designed logical network, and determines the designer's intentions and automatically supplements necessary network functions by checking the connections between objects at different levels, such as IT infrastructure, subnets, and nodes, located at both ends of the connection. 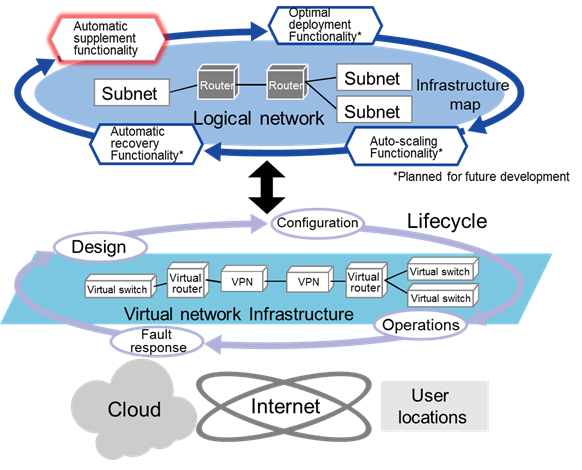 Figure 3: Summary of the IT infrastructure abstraction technology 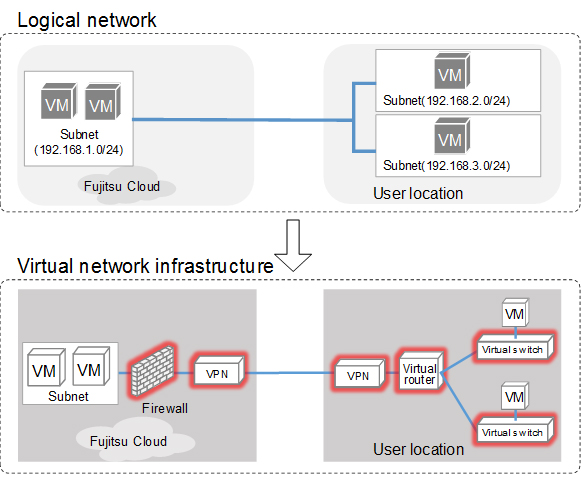 With this new technology, it is now possible to quickly build a complex virtual network infrastructure that extends across multiple companies or locations, without expert knowledge. It is possible, for example, that the design and configuration of a virtual network infrastructure extending across one cloud and a location with a few dozen devices could be completed by one engineer in one day, whereas previously four engineers with expert virtual knowledge took three days. This can shorten the configuration time to less than one-tenth what was previously required.

In case of migrating enterprise systems to the cloud, it is now possible to complete migration in a short period of time by simply performing operations on the logical network. In addition, when setting up a network at multiple locations, the user can design one logical network, then easily set up a virtual network at each location and add security functionality by copying and customizing the same design.

Going forward, Fujitsu Laboratories and Fujitsu Laboratories of America plan to continue development of other functions for lifecycle management in logical networks using this technology, with the goal of Fujitsu Limited conducting its sales as a network management function for enterprise users of cloud services after fiscal 2017. This function will also be available on the FUJITSU Cloud Service K5 provided by Fujitsu Limited.