The University of Toronto and Fujitsu Laboratories Ltd. today announced joint development of the world's lowest power referenceless CDR(1). The newly developed circuit operates with 55% of the power requirements of previous technology for optical modules in Ethernet used for communication between servers and switches in datacenters.

With the spread of big data analysis and cloud services, there has been a demand for faster and denser optical modules in order to provide high data transfer capability between servers and switches, which has necessitated miniaturization and reductions in power consumption.

To speed up and miniaturize optical modules, referenceless CDR technology has been developed that does not require a crystal oscillator to produce the standard timing. With existing referenceless CDRs, however, the circuit that detects discrepancies in the timing cycle for reading input data has high power consumption, leading to problematic heat generation and causing difficulties in increasing circuit density.

Previously, in order to detect discrepancies in the data-reading cycle, it was necessary to detect the signal four times with different timing for each bit of data, with the power consumption for each timing generator taking up a significant proportion of the power consumption of the module as a whole. Now, the University of Toronto and Fujitsu Laboratories have developed a new timing extraction technology that can operate on the same cycle as the data transmission speed, detecting once for each bit discrepancies in the reading cycle from amplitude information in the input signal. The result is that the number of timing generators can be reduced to one-fourth that of previous architectures, successfully cutting power consumed by the optical module as a whole to about 70% that of previous technologies.

Details of this technology will be announced at the IEEE International Solid-State Circuits Conference 2017, which is the largest conference for semiconductor technology, being held from February 5 in San Francisco (ISSCC session numbers 6.6)

Reducing the number of components in optical modules is an effective way to reduce the power consumption and improve miniaturization. For this reason, referenceless CDRs, which do not require a standard timing (reference), are used to enable the elimination of the crystal oscillator.

The circuits that regulate the observation of the input signal and the reading of data in existing referenceless CDRs, however, must operate at high speed, leading to high power consumption, as well as difficulties in high density installation due to heat that accompanies this power consumption.

Figure 1: Structure of the connection between a CPU and an optical module using referenceless CDRs

With existing referenceless CDR architectures, the CDR decides whether each bit of data is a 1 or a 0 four times, and the data-reading cycle is regulated by observing changes in the results of each decision.

Now, Fujitsu Laboratories and the University of Toronto have developed technology that reduces the power consumption of referenceless CDRs by using a new method to detect discrepancies in the data-reading cycle from the amplitude information of the input signal.

With this technology, it becomes possible to reduce the number of timing generators to one fourth that of previous architectures (Fig. 4). 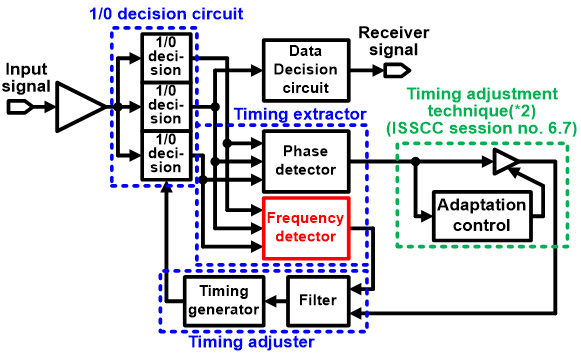 Fujitsu Laboratories is aiming for the commercialization of this newly-developed technology in fiscal 2019.

About The Edward S. Rogers Sr. Department of Electrical & Computer Engineering at the University of Toronto

Founded in 1909, The Edward S. Rogers Sr. Department of Electrical & Computer Engineering (ECE) at the University of Toronto maintains a proud history of innovative education and world-leading research. We are the top-ranked ECE department in Canada and among the best in the world. Our strong emphasis on teaching excellence means both undergraduate and graduate students learn from professors who are international leaders in their fields, in a vibrant and diverse environment. ECE graduates become leaders in every possible field, from mobile to medicine, energy to entertainment. For more on our degree programs, research and events, visit www.ece.utoronto.ca