Approximately doubles communication speed, on average, by automatically batch-setting communication routes for devices in an area

Fujitsu Laboratories Ltd. today announced the development of connection control technology for LTE and Wi-Fi to boost communication speed in areas with Wi-Fi.

In recent years, with the spread of smartphones and tablets, there has been an increase in high-load traffic, such as videos. In addition, Wi-Fi is being expanded, and it is expected that, with the further expansion of areas in which it is possible to use Wi-Fi in the future, users will have more opportunities to enjoy watching videos and using other services while out and about. Current technology allows a large number of users to connect to public Wi-Fi, however, when users who are watching videos or using other high-load communications are concentrated around a single access point, the communications speed can drop, causing situations in which videos stop playing. There is a demand for technology that can avoid this type of situation, without stress on users. 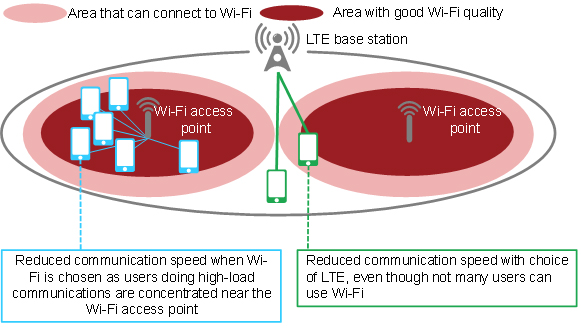 Figure 1: Issues with existing technology (connecting to LTE when communication quality is bad)

Now Fujitsu Laboratories has developed connection control technology in which a dedicated application is installed on a device that communicates with the connection control function on the control server, which predicts communication speed if multiple devices changed their connection at the same time. It then automatically sets communications routes for multiple devices in a given Wi-Fi service area all at once based on that prediction (Figure 2). Features of the technology are as follows.

1. Technology that estimates the volume of usable wireless resources 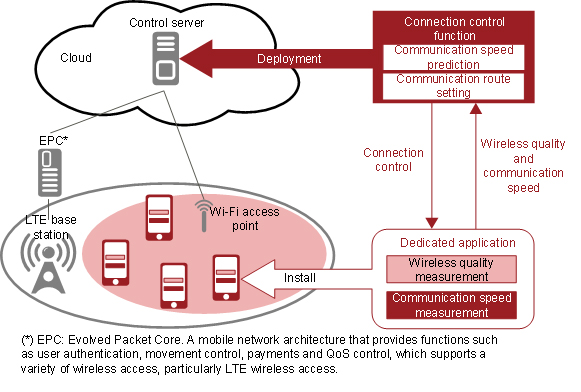 Fujitsu Laboratories set up a Wi-Fi access point in a communication area covered by a telecom carrier's LTE network, then placed multiple devices in the area covered by the Wi-Fi access point and measured their communication speeds, both when using existing technology, as in Figure 1, and when using the newly developed connection control technology. Measurements were taken while varying the placement of the devices, and it was confirmed that the new technology could, on average, double communications speed, compared with existing connection control technology.

With this technology, services that require high communication speeds, such as streaming video, can be used even more easily in Wi-Fi service areas.

Fujitsu Laboratories aims to conduct even larger-scale field trials using this technology to improve its stability, with the goal of commercializing it in fiscal 2018. Also, Fujitsu Laboratories intends to move forward on expanding functions to enable selection of radio access technologies for 5G, aiming for application from fiscal 2020 onwards.