Fujitsu today announced the launch of FUJITSU Manufacturing Industry Solution VisuaLine, an IoT solution that visualizes the operational status of the manufacturing process based on log data of operating results collected from a factory's equipment. Sales of this solution will commence in Japan from December 5.

This solution collects log data from the manufacturing equipment used in the production process, and visualizes the operational status for each individual product in a variety of formats, such as graphs. By comparing these graphs on a daily basis, users can at a glance see portions of the process that are taking more time than usual, enabling them to quickly discover anomalies that would not otherwise be discovered unless they caused the equipment to set off an alarm or cease operation.

With this solution, users can discern problems based on the log data, such as if equipment is failing or deteriorating, allowing them to use the information to discover new places to improve the manufacturing facilities or to establish policies. 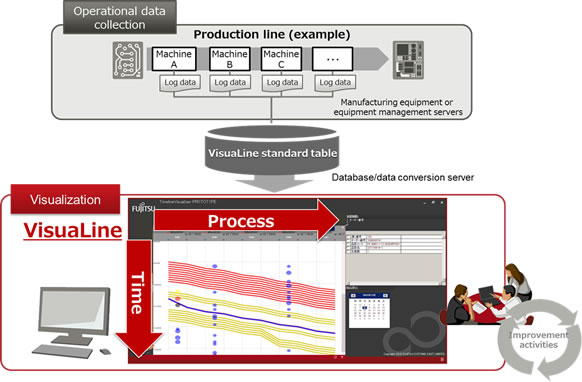 Manufacturing facilities in Japan constantly plan and review the design and processes of their production lines, but because countermeasures for issues like malfunctioning production equipment are only taken when they cause an alarm or cease operation, there have been many issues in shortening lead times and improving efficiency.

In 2014, Fujitsu began a joint trial initiative to transform manufacturing using log data from manufacturing equipment on the printed circuit surface mounted technology (SMT process) line in Omron's Kusatsu Factory, which confirmed an improvement in production efficiency of 30% over six months. In addition, in an internal trial carried out in 2016 in the SMT process at the Yamanashi Plant of Fujitsu I-Network Systems Limited, downtime was successfully reduced by 25%.

Now, based on the visualization function that provides line graphs of operating results established in the joint trial with Omron, Fujitsu is offering VisuaLine, with functionality such as video linking, which was developed in the internal trial at Fujitsu I-Network Systems, to support the transformation of manufacturing facilities with IoT.

1. Provides visualizations in which anyone can determine anomalies at a glance

This system uses log data for all of the manufacturing equipment involved in the production process for an individual product, from beginning to end, and visualizes this data in a graph that displays process time as a waveform. This makes it possible to grasp the operational status at a glance, such as steps in the process that are taking longer than usual, or steps that have from the start of operations chronically taken more time, so that anyone can easily discover anomalous parts of the process. This means that anomalies that would previously have been discovered through alarms from the equipment or operation shutdowns can be prevented through advance inspection, improving production efficiency.

By linking information from graphs to cameras installed in a manufacturing facility, and then clicking on points in the graph the user would like to see, such as anomalies, it is possible to check video of that point in time, such as what happened at that location or what countermeasures were taken. In addition, this system enables users to search for places to improve based on where they fell short of goals, through a comparative visualization function that compares scheduled process goals and actual results. It also enables users to study the most efficient processes through an equipment visualization function that can check the production line path for each product.

This solution utilizes performance data from existing equipment as is, so IoT-based improvement of manufacturing facilities can be started immediately. With the ability to have small starts that keep initial investments in check, deployment from a single line can be rolled out and expanded to other factories.