Ten times more sensitive to NO2, and can be used to monitor the environment in real time

Fujitsu Laboratories Ltd. today announced the world's first successful development of an exquisitely sensitive gas sensor based on a new principle that takes advantage of graphene, a material in which carbon atoms are arranged in a sheet one atom thick.

This development paves the way for compact instruments that can measure specific gas components with speed and sensitivity, for detecting atmospheric pollution or testing for organically derived gases in a person's breath.

Fujitsu Laboratories has developed a gas sensor that operates on a new principle, in which the gate part of a silicon transistor is replaced by graphene. This sensor can detect concentrations lower than tens of parts per billion (ppb) of nitrogen dioxide (NO2) and ammonia (NH3); with nitrogen dioxide in particular, sensitivity has improved more than tenfold, to less than 1 ppb.

This technology is expected to enable real-time measurements of air quality, which may have taken tens of hours depending upon the gas being measured. It will also simplify detection of gas components in breath, which can be used to quickly discover lifestyle diseases.

Details of this technology are to be presented at the 2016 IEEE International Electron Devices Meeting, which opened December 3 in San Francisco.

Graphene, a two-dimensional sheet of carbon just one atom thick, has remarkable electrical properties far beyond the limits of very-large-scale integration (VLSI) circuitry using silicon, which is reaching the limits of miniaturization. This has garnered attention as a material for next-generation electronic devices. Fujitsu Laboratories is developing ultrafast, low-power transistors and revolutionary devices using graphene, and is also developing functional devices such as high-sensitivity sensors using graphene. 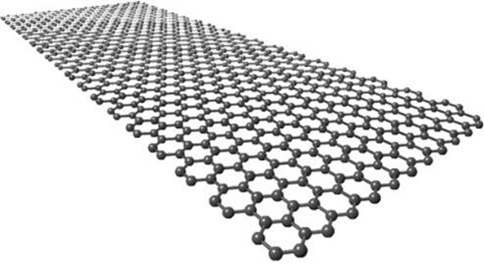 Figure 1:Arrangement of carbon atoms in a sheet of graphene

Gas sensors have been proposed as one kind of functional device that can be made using graphene. The hope is that it will allow for sensors that can measure certain gas components with high sensitivity (on a ppb scale) for detecting air pollution or gases contained in human breath. While it is possible to perform extremely sensitive measurements using specialized equipment, such as gas chromatographs, this equipment is large and the measurements take time. There are semiconductor gas sensors that are compact and work in real time, but these generally operate at a sensitivity on the order of parts per million, so their performance is not sufficient for detecting certain gas components. There have been proposals for sensors that use graphene that would work by detecting the change in resistance across the graphene to which a gas adheres(1), but resistance only varies by several percent in the presence of 1-parts per million (ppm) concentrations of gases, which does not reach the level needed for real-world use.

Fujitsu Laboratories has now developed a gas sensor based on a new principle. In such a sensor, a graphene sheet with just a single layer of atoms replaces the gate part of a conventional silicon transistor (Figure 2). When a gas molecule adheres to the graphene, the graphene's work function(2) changes, and the result is that there is a major change in the switching characteristics of the silicon transistor. It is this principle that enables a gas to be detected. When the gas molecule separates from the graphene, the graphene returns to its original state.

A sensor based on this principle has been created that measures a few tens of ppb of ammonia and less than 1 ppb of NO2 in a nitrogen environment. Among the gases expected to be found in analyses of the air or human breath, the results of tests have demonstrated that it reacts only to NO2 and NH3, meaning that it can detect only specific gases (Figure 3). 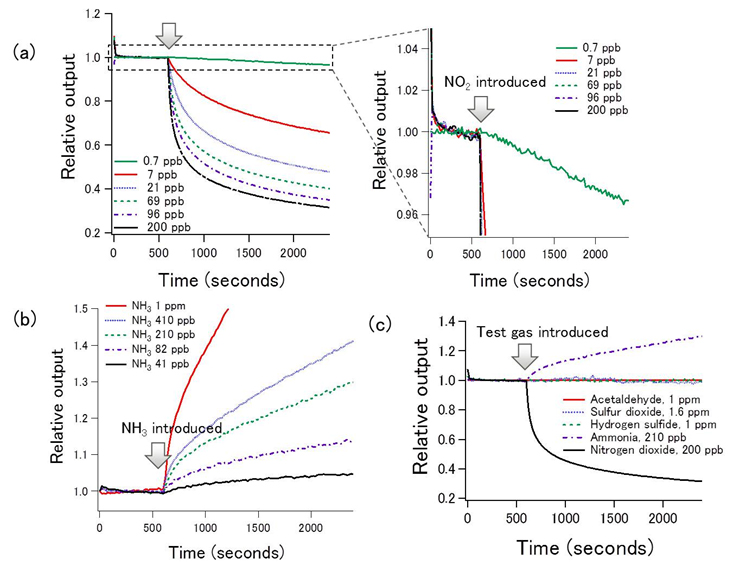 This technology's sensitivity to NO2 is an order of magnitude greater than conventional resistivity-based graphene sensors, at less than 1 ppb, and the commercially available electrochemical sensors, which have sensitivity of over tens of ppb.

This sensor is compact, with a detection area of only a few hundred micrometers, but could be made even smaller (less than one micrometer). Sensitivity is greater than existing technologies, and because its mechanism does not rely on chemical reactions, the sensor returns to its original state through methods such as the application of heat to the device. This sensor could be used in a compact device that could measure NO2 anywhere, in real time, at the environmental benchmark level of sensitivity of 40-60 ppb, which is an index of air pollution.

Fujitsu Laboratories has tested the validity of the principle behind the graphene gate sensor, and aims to put it into practical use as an environmental sensor after verifying its characteristics and studying its durability. The company also plans to find ways to detect gases other than nitrogen dioxide and ammonia by combining graphene with other molecules.

Furthermore, by combining this sensor with a sensor announced in April 2016(3) that can measure ammonia with a high degree of sensitivity, Fujitsu Laboratories plans to develop a highly sensitive and portable sensor that can be used as conveniently as a thermometer to measure gases in human breath for early detection of lifestyle diseases.