Fujitsu Laboratories Ltd. today announced the development of an automatic analysis technology to improve communications performance and quality in virtual networks. With the spread of virtualization technologies, such as the cloud, software defined networking (SDN)(1), and network functions virtualization (NFV)(2), there is demand for the ability to flexibly set up and operate high performance virtual infrastructure. In order to set up and operate virtual infrastructure for operations that require high performance, it is necessary for experts with knowledge of both hardware and software to take time to analyze bottlenecks and set up the virtual infrastructure appropriately. This results in high operating costs with frequent changes to the system structure or usage situation.

This technology will be exhibited at Fujitsu Forum 2016 Munich, to be held from November 16-17.

With the spread of virtualization technologies like the cloud and NFV, the importance of virtual network technologies for rapidly and flexibly connecting multiple systems is increasing. In current virtual networks, there are issues with degradations of communication performance and quality, particularly at high load times, so there has been a demand for technology to improve them for applications which require high communications performance and quality, such as telecommunications carriers.

In order to improve the communications performance of virtual networks, it is necessary to identify the locations and causes of bottlenecks, and then, based on those results, to eliminate the bottleneck by appropriately configuring the hardware and software. This can be done by expanding the buffer between processes that are communicating with each other in significant volumes, for example, or by changing deployment such that the processes communicating with each other are handled on processors with shorter communication routes. In order to identify bottlenecks, it was necessary for an expert who is well versed in in the methods of configuring both hardware and software, and familiar with their characteristics, to spend time investigating the bottlenecks. In addition, as the system structure and usage situation frequently change with virtual infrastructure, it was necessary to analyze communications bottlenecks with every change and reconfigure the virtual infrastructure, resulting in higher operating costs. 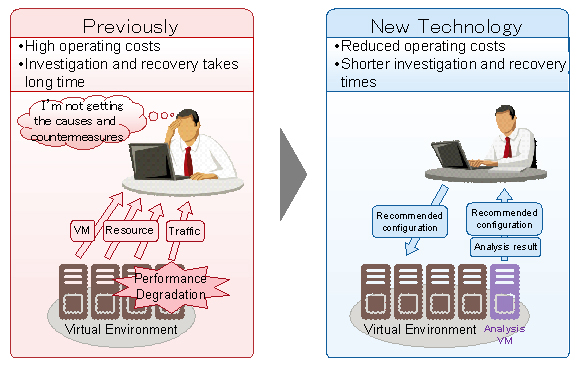 1. Technology that captures communications packets on the virtual network with low load

Compared with physical networks, virtual networks more often experience packet loss, particularly under high load conditions, which worsens communication performance and quality. With monitoring information that could be gathered in operating previous virtual infrastructure, only a portion of packet loss could be detected, making it difficult to identify the causes of bottlenecks. With this newly developed technology, by analyzing the behavior of captured communication packets, packet loss that occurs in virtual infrastructure can be thoroughly detected. This includes loss caused by hypervisors or VMs, which was previously difficult to detect. Based on this information, the technology correlates packet loss trends and infrastructure resource usage information to analyze bottlenecks and display configurations to eliminate them.

In a trial based on a communications environment with high volumes of traffic, one in which file-transfers and other bandwidth intensive activity is taking place, Fujitsu Laboratories confirmed that using the same hardware with the configuration recommended by this technology roughly doubled communications performance. A decreased packet loss rate and other factors also enhanced communications quality by approximately ten times. In addition, with this bottleneck analysis and optimal configuration generation technology, it has become possible to quickly and optimally configure a virtual network without an expert, which is also expected to reduce operating costs. With this technology, it is possible to operate stable services using virtual infrastructure, even in applications where virtualization technology could not previously be applied because of communications performance and quality problems, such as in a telecommunications carrier's networks, which require flexible changes in network structure.

Fujitsu Laboratories will continue research and development on this technology with objectives such heightening the ability to solve detectable bottleneck events that currently prove problematic, and improving the accuracy of the analysis. This technology will be incorporated in operations management products, beginning with FUJITSU Software ServerView Infrastructure Manager, in fiscal 2017.