Fujitsu Limited and Fujitsu Client Computing Limited today announced the release of 24 new enterprise Windows models in twelve product series, including five desktop PC models in three series, eleven laptop models in five series, six tablet models in two series, and two workstation models in two series. The new models will be rolled out in stages from the end of this month and will be available only in Japan.

The FUJITSU Tablet ARROWS Tab Windows tablet models reflect customer wants based on Fujitsu's track record of providing tablets to customers. The models include the new ARROWS Tab Q507/PE, which has been designed to be even easier to use in classroom environments.

All 24 models run the latest version of Windows 10 with the Windows 10 Anniversary Update with many improved functions. Support will continue to be provided for models downgraded to Windows 7, for which there is significant demand in the enterprise market. For all the new laptop and tablet models, customers can choose the customized option of PASERI for PC (contained in a USB memory stick), which is new software with enhanced security.

The Fujitsu Group supports a diverse array of customer work across various industries with a full range of features in each series.

1. ARROWS Tab Q507/PE, a 10.1-inch tablet designed for ease of use in classroom environments

Fujitsu used elastomer in the four corners of this 10.1-inch wide tablet to make it slip-resistant, resulting in a safe design that effectively prevents the device from being dropped. To make it easier for younger students to carry and operate, the keyboard was made lighter, weighing approximately 365g(1). The opening angle between the keyboard and display has been narrowed from 150 degrees in previous models to a maximum of 125 degrees, making for a structure that is difficult to tip over. The attached pen, which analyzes variations in friction, approximates the feel of writing on paper for an improved writing experience. In addition, for use in physical education lessons in mind, through enhanced water resistant features (IPX5/7/8), including the ability to withstand chlorinated pool water(3), it can be safely used even during swimming lessons. 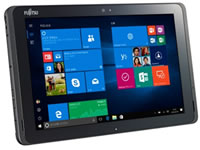 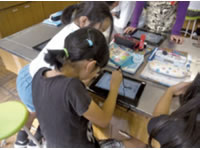 Tablets being used in a school

All 24 models run Windows 10 Anniversary Update, the latest Windows 10 update. Many functions have been upgraded for improved ease of use, such as including the Windows Ink handwriting input function, the Windows Hello biometric authentication feature(4), the Cortana personal assistant, the Microsoft Edge browser for Windows 10 with enhanced functions, as well as Windows Information Protection and Windows Defender Advanced Threat Protection, which contribute to safe operations with enterprise data.

3. Continued support for models downgraded to Windows 7 or Windows 8.1

To respond to the need to have Windows 7 support, for which there is significant demand in the enterprise market, ongoing support will be provided for models downgraded to Windows 7 or Windows 8.1, in addition to Windows 10. In addition, the standard HDD capacity for all laptop series (except T936/P and U745/M) desktop PC series, and workstation series models has been increased from 320GB to 500GB.