Fujitsu Limited and QD Laser, Inc. today announced that their Retinal Imaging Laser Eyewear has received the Minister of Economy, Trade and Industry Award. Positioned as the highest award of CEATEC AWARD 2016, this honor is the result of rigorous scrutiny by the CEATEC AWARD Review Panel.

In the CEATEC AWARD program, from among exhibits submitted by 648 companies and organizations, the METI Award is bestowed upon the product or system, service, or supporting elemental technology, component or device in the IT or electronics field that contributes to people's lifestyles or society, manufacturing, business transformation, or solutions to social or daily life issues.

Reasons for Receiving the Award

The Retinal Imaging Laser Eyewear was recognized as an important technology, and is anticipated to have practical applications in a wide range of fields. This technology offers an array of advantages not available with conventional head mounted displays (HMD), including a focus-free feature that eliminates the need for the user to adjust eye focus, and its pursuit of universal design for a natural external appearance, with no protruding parts. It also holds the potential of becoming an alternative technology, with support for low vision eyesight, augmented and virtual reality and other sophisticated functions.

Retinal Imaging Laser Eyewear uses laser technology to directly project images onto the retina from a miniature projector. The user can view images from an embedded camera or digital data from external input. The independently developed optical system has little impact on visual acuity or eye focus, and with a design that has the projector mounted inside the frame, there are no protruding parts.

As a transparent-type HMD, in addition to augmented reality and smart glasses applications, it is mainly being developed as a medical device for the purpose of supporting the visual function of people with low vision (visually impaired but not completely blind), who have irregularities in the anterior part of their eyes.

*The laser beam used by this technology is categorized as Class 1 in the IEC60825-1 international standard, meaning that it is safe under reasonably foreseeable use.
*Visual performance will vary depending on the person. Before use, please get advice from specialized staff designated by QD Laser.
*This technology is under development. Regarding its application in supporting visual function, it has not yet received approval under Japan's Pharmaceutical and Medical Device Act, and it cannot be sold or distributed. 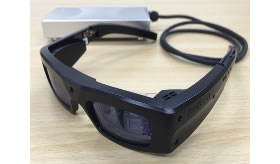 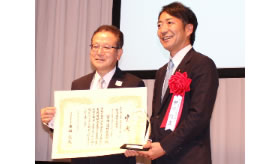 At CEATEC Japan 2016, Mitsuru Sugawara, the President and CEO of QD Laser, will give a presentation at the Venture & University Area for special exhibitions in Hall 4.

Established in April 2006 as a spin-off venture of Fujitsu, with capital from Fujitsu and Mitsui & Co. Global Investment Inc. (at the time named MVC Corporation), a subsidiary of Mitsui & Co., Ltd. It is engaged in the development, production, and sales of high-performance semiconductor lasers, including quantum dot lasers, from the visible light region up to 1300nm wavelength, based on the joint development from an industry-academic collaboration of more than ten years between Fujitsu Laboratories Ltd. and the University of Tokyo.