Fujitsu has received an order for an experiment-analysis system from Kamioka Observatory, part of the Institute for Cosmic Ray Research (ICRR) at the University of Tokyo. The system is destined for Kamioka Observatory's Super-Kamiokande facility, which is helping to shed light on the workings of the universe through the observation of neutrinos(1), and is scheduled to go operational in March 2017.

This new system will consist of a computational server cluster that will be composed of 85 FUJITSU Server PRIMERGY RX2530 M2 x86 servers, a high-speed, distributed file system, and a data processing system located at the underground experiment site. The computational server will have a performance level of a SPECint_rate2006 benchmark result of 107,100(2), about triple that of the existing system, with about three times the disk space and data transmission speed.

The Kamioka Observatory operates the Super-Kamiokande facility, constructed in the Kamioka mine located in Kamioka-cho, Gifu Prefecture, and by observing neutrinos, is helping to solve the mysteries surrounding the birth of the universe and the creation of matter. In 2015, the ICRR's director, Professor Takaaki Kajita, received the Nobel Prize in Physics for the discovery of neutrino oscillations, which shows that neutrinos have mass. This discovery meant that the Standard Model, which assumed that neutrinos had no mass, required extensions. This has had a significant impact on a wide range of areas of research.

In addition to solar and atmospheric neutrinos, the Super-Kamiokande detector must always be ready to reliably observe very rare phenomena such as supernova neutrinos which only occur once every few decades for a matter of seconds. Therefore, the computer system must be able to operate with stability 24 hours a day, 365 days a year, and perform high speed analysis processing and securely store massive amounts of observation and post-analysis processing data of up to 500 GB per day. It must also be able to rapidly access huge volumes of past data in order to re-analyze data in a short period of time.

With this new system, Fujitsu will further improve analysis efficiency over the current system. This includes enhanced reliability to meet these requirements, better data analysis performance, the massively strengthened storage capacity necessary for the next five years of observations, and analysis resource allocation when the load is concentrated.

Summary of the Computer System for Super-Kamiokande

This system, installed in The Kamioka Observatory, consists of a computational server cluster, a high-speed distributed file system, and a data processing system located at the underground experiment site. The new system will be built entirely with Fujitsu products, including hardware using the latest CPUs and hard disks and software such as the FUJITSU Software FEFS scalable file system and the FUJITSU Software Technical Computing Suite HPC middleware, with the goal of improving analysis efficiency through a highly reliable system, leading to even more accurate observations.

The goal of the computer system is to accumulate observation data, and to analyze such factors as energy and the direction the neutrinos move. Through this analysis, the researchers aim to shed light on the properties of neutrinos, solve the mystery of how matter was created in the immediate period after the big bang, as well as verify the Grand Unified Theory(3) by discovering the phenomenon of proton decay. 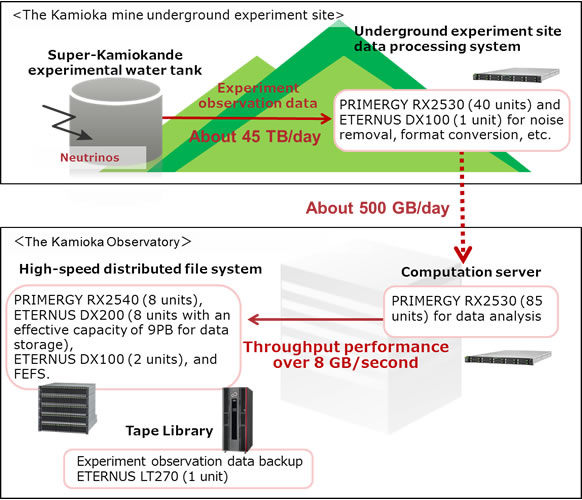 The computation server will be a cluster system composed of 85 PRIMERGY RX2530 M2 x86 servers (170 processors, 2,380 cores), which will provide calculation performance approximately triple that of the current system, with a SPECint_rate2006 result of 107,100.

The observation data captured by the Super-Kamiokande facility's photomultiplier tube detectors will be sent to a system installed within the mine consisting of 40 PRIMERGY RX2530 M2 x86 servers and one ETERNUS DX100 S3 storage system, then transmitted to the high-speed distributed file system after undergoing such procedures as noise removal. This highly reliable system will offer the 24/7/365 stable operations necessary to record the precious observational data without any loss.

Comment from Yoshinari Hayato, Assistant Professor at the ICRR, University of Tokyo

In the 20 years Super-Kamiokande has been in operation, we have accumulated a great deal of data, and we are continuing to do so. By using this data, it is becoming possible to carry out more detailed research to understand the characteristics of neutrinos. More accurate event reconstructions and more precise simulation data production require greater computational resources. Now, with this new system's increase in CPU and memory performance, we expect to further advance research to solve problems. For example, the difference in neutrino and antineutrino oscillation due to the violation of charge-parity symmetry, which is thought to be related to the origins of the matter-dominated era in the universe's history, or research into problems related to neutrino mass (the hierarchy problem). We also aim to further lower the energy threshold for solar neutrino observation. In addition, plans are currently underway to improve the Super-Kamiokande detector in order to observe neutrinos from the many supernova explosions that have occurred since the beginning of the universe, and we plan to use this new system to analyze that data as well. All this research is not only deepening our understanding of the properties of neutrinos, we believe it may also lead to solving the mysteries of how the universe formed. Beyond this neutrino research, we are also continuing to search for as-of-yet undiscovered forms of proton decay, in the aim that it will experimentally validate the Grand Unified Theory, which no one has yet achieved.