Fujitsu Limited and Fujitsu Systems East Limited (collectively "Fujitsu") today announced development of a factory system for TOTO Vietnam(1), TOTO LTD.'s location in that country, so that workers can visualize production status and data on quality, starting from raw materials, and continuing throughout the process. This system, introduced to raise the production efficiency of ceramic sanitary ware produced at the factory, started operations at TOTO Vietnam's first factory on July 1st.

This system innovates the production of sanitary ware, which requires extremely sensitive operations, such as the mixing of raw materials and adjusting contraction rates. IC tags are used to not only track the progress and quality of products, but also to collect and digitize a variety of data, such as work procedures and other know-how of skilled workers. In addition, Fujitsu has a system which emphasizes the operability of tablets that employees use to input inspection information, featuring displays with easy-to-understand graphics and touch input functionality, and proprietarily developed applications. By implementing IoT, which puts the information created by people and things to effective use, the system enables visualization of trained workers' expertise, which was previously difficult to record as data. It also makes possible analysis with the use of statistical data, leading to stable production of high-quality products.

Through this system, Fujitsu contributes to TOTO Vietnam's efforts to improve sanitation conditions in Vietnam, a country which faces social problems due to the difficulty of securing safe drinking water, as flush toilets have not spread to ordinary households and sewer systems have not been put in place.

Developing countries like Vietnam face many issues, including sanitation problems and a lack of toilets. In Vietnam, where the economy is developing rapidly, although infrastructure is being rolled out from the urban areas where peoples' lifestyles are concentrated, when it comes to toilets and sewers, about 40% of households use a chamber pot, and the adoption rate for flush toilets has still not even reached 20% of the country's population. In the rainy season, the filthy water from chamber pots and the like spread infections and diarrhea, endangering those with weak immune systems, such as children and the elderly.

TOTO, a company that will celebrate its centennial anniversary in 2017, aims to promote healthy cultural lifestyles in all regions by providing products using its cutting-edge water-saving and sanitation-preserving technologies, to strengthen the production of sanitary ware, beginning with toilets, and to contribute to the development of a culture which values water used throughout the home. As part of this goal, it has placed the Asia and Oceania regions at the center of its global supply chain, securing a stable global supply system. In addition to its 29 production-related companies located in the Japan, US, China, Asia and Oceania regions, TOTO plans to operate a third Vietnam factory beginning in March 2018.

Sanitary ware is large in size and complex in terms of shape. Required for greater stability in its production are skilled techniques and advanced technology, such as in molding operations which must consider warping and shrinkage in post-processing, temperature management of tunnel kilns that require high temperatures and a great deal of attention, and inspections by certified inspectors who possess knowledge and experience. Given this, it is critical to have the ability to visualize such know-how and statistically analyze operations.

This is why TOTO, together with Fujitsu Systems East, began efforts to transform its Vietnam factory production in September of 2015, a site which is central to its global supply chain. The aim was to not only improve production and the quality of the sanitation ware, but also to train employees who can employ skilled techniques and advanced technology.

The system is now operating in TOTO Vietnam's factory, located in the Thang Long Industrial Park in Hanoi. In order to provide stable production of high-quality sanitary ware, the system enables quality data and information about the status of production throughout the whole manufacturing process to be collected and used. Building and operating this system was made possible owing to the experience cultivated by Fujitsu Systems East in support of resolving on-site issues of various existing clients.

1. IC tags and barcodes streamline production with data collection, use on products in progress

By using the IC tags and barcodes attached to products in progress and all sorts of equipment to collect a variety of performance information, including not only quality and progress information throughout the entire process, from the mixing of raw materials to inspection, but also the humidity and temperature when raw materials are mixed and the type of glaze applied to the sanitary ware, it becomes possible to trace individual products in real time. This enables an understanding of quality information from when the product was manufactured, even after it ships.

Traceability in the manufacturing process

In the TOTO Group, millimeter-scale distortions and flaws cannot be allowed in sanitary ware that will be installed in plumbing, so it is meticulously designed, taking into account the fact that ceramic shrinks in the drying and firing process. A strict, detailed and multifaceted inspection is also carried out. To enable inspectors to record thorough inspection results, including details, the system displays a diagram of the flush toilet from all six perspectives, above and below, in front and behind, and left and right, where inspectors can instantly record or check the locations and status of flaws. Using the data collected on these tablets, system operators can digitally grasp locations with a tendency to produce flaws, or elements in the facilities or environment that may cause flaws. This can lead to further improvements in the manufacturing process.

3. Human resource development and experience transmission through the use of data

By implementing this system, TOTO Vietnam can share information that was not previously visualized, such as the work procedures taken by experienced workers and inspection results, invigorating communication and exchanges of opinion among workers. This system is intended to support local Vietnamese employees in their proactive efforts to improve production, leading to improved human resource development.

4. Provides a superior user experience in a production environment

Fujitsu built a system where production performance and product inspection results, which employees previously recorded on paper, can be easily input on tablets and handy terminals. The companies worked with employees on the actual production line, having them test out the tablet input screen, confirming its readability and usability, collaborating on everything from the size of the text and the placement of input fields to the size of the keyboard. 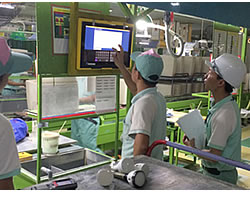 By supporting TOTO Vietnam's efforts to further improve its production and productivity, Fujitsu promotes the further spread of flush toilets, contributing to healthier and prosperous daily lives for the people of Vietnam. In addition, using the experience gained from implementing this system, Fujitsu will support its customers' business transformations by providing new solutions to its manufacturing customers.