Fujitsu Laboratories Ltd. today announced the development of field engineering technology that shortens the time necessary to install on-site IoT devices that use wireless communication, such as Wi-Fi and Bluetooth, and provides stable operations.

In locations where IoT devices have been installed, instability in wireless communication can occur as people and things moving about can greatly change the radio wave environment, and as the radio waves emitted by smartphone and other commonly used devices may create interference. Responding to this instability creates issues in installation and operations as time and effort are required for experts to do necessary on-site adjustments through trial and error.

Fujitsu Limited plans to offer this technology as a consulting service from the first half of fiscal 2016.

A portion of this technology will be exhibited at Wireless Technology Park 2016, which will be held starting May 25 at Tokyo Big Sight.

Efforts are currently underway to create practical implementations of IoT systems in locations where people are active, such as factories, shopping centers, stadiums, stations and airports, and office buildings, and in order to install sensors flexibly and efficiently, systems using radio waves, such as Wi-Fi, Bluetooth, and ZigBee, are widely used. 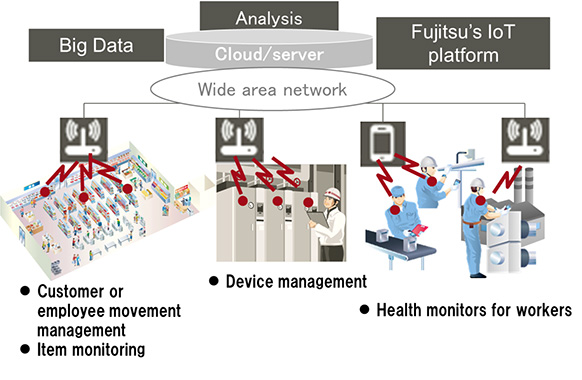 Environments considered for IoT system implementation often have many people and things coming and going, which can often cause instability in wireless communications during operations because they block or reflect radio waves. In addition, devices such as smartphones carried by people moving through the location emit radio waves that can cause mutual interference among those communications.

It could often take several weeks before the stable operation of IoT systems was achieved, as it was necessary for radio wave experts working on the installations to repeatedly reinstall and re-test the system, relying on their expertise in using specialized measuring devices. These issues in implementation and operation led to a demand for technology that makes it easy to install IoT devices.

The key features of these technologies are as follows:

Fujitsu Laboratories has simplified the handling of radio wave simulations, which previously required huge amounts of time and effort, with the following two technologies, which can simply and automatically determine installation points for wireless devices, even without wireless device expertise.

1) 3D spatial digitizing technology:
Fujitsu Laboratories has developed technology to automatically create the 3D layout data necessary for radio wave simulations just by measuring with a laser scan from a few points around the site, and then automatically correcting distortions and smoothly merging measurement data from multiple scans. With this technology, the time required to create the layout data is shortened from around one week when creating it by hand to around two hours, including measurement time.

2) Moving body modeling technology:
In order to reflect the impact of people's movements numerically, it was previously necessary to run many simulations, changing the placement of people a bit each time. Now, by automatically measuring the number of people coming and going using technology developed by Fujitsu Laboratories that recognizes the flow of people from video(1), making patterns for different numbers of people, and using these in simulations, simulations that might have taken three days can now be done on an ordinary PC in less than fifteen minutes. 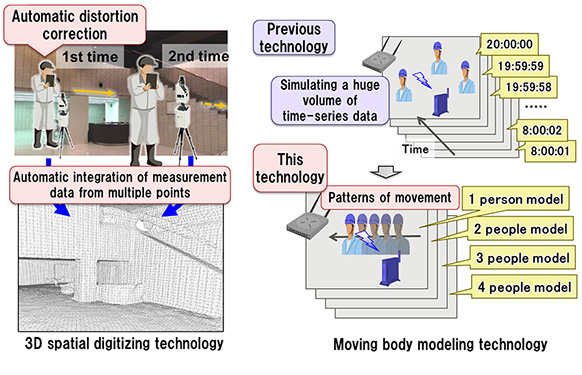 Fujitsu Laboratories has developed technology that automatically recognizes and displays wireless communications actually being used at sites where IoT devices are installed, and visualizes the state of signal congestion for each channel and location, and for each communications standard. This makes it possible, even for non-experts, to determine appropriate installation locations for IoT devices, data transmission time spacing, and channel settings.

This technology recognizes wireless standards (such as Wi-Fi, Bluetooth and ZigBee) through a unique computation method of correlation coefficient between received signals and signal patterns prepared for each wireless standard. Previous technology would perform a product-sum operation with signal patterns prepared for each standard, after frequency correction of the received signal, but this technology uses the fact that, when the received signal differs from the prepared signal pattern, the results of multiplication of the signal before frequency correction have high randomness to achieve high recognition performance, successfully improving recognition sensitivity to twice that of previous methods.

With this newly developed technology, Fujitsu Laboratories has reduced the time required to install IoT devices at a site to one-third that of previous methods.

This means that, because the installation of wireless devices, which created issues for implementing and operating an IoT system, and radio wave congestion and interference countermeasures have become easier to do, when using an IoT system with the goal of achieving operational efficiencies or to create value, customers can greatly reduce the time needed before they start actual operations. In addition, even after starting operations, these technologies also make it possible to operate stably, without any major trouble causing operations to stop.

Fujitsu Limited plans to offer this technology as a consulting service from the first half of 2016.