By turning expertise with regard to tasks such as network systems operation and maintenance into scenarios that allow those tasks to be automated, Virtuora SP greatly reduces the time to start providing services to customers, as well as reducing operating costs.

Fujitsu aims to speed up customers' network service provision through software-defined networking (SDN) technology, and by providing network DevOps solutions(1) such as Virtuora SP, Fujitsu can support the total lifecycle of network services.

In recent years, network operation and maintenance tasks have tended to become increasingly automated and sophisticated due to the implementation of SDN technology. At the same time, network system operation and maintenance tasks are becoming more complex, and there is an increasing need for highly specialized knowledge in on-site developers and operations and maintenance personnel. In addition, as experienced personnel decline in numbers, there are the issues of increased costs due to adding workers and diminished work quality when knowhow is not passed along. With the launch of Virtuora SP, the newest product in the Virtuora series, Fujitsu has improved the quality and speed of customers' service provision by automating tasks and compiling experience in operations and maintenance.

Policy definitions normally have to be described in a programming language, but using the Policy Design Tool, users can easily create a graphical workflow using standard Business Process Model and Notation(4) flowchart formatting, and define it as a policy. Moreover, they can also easily and quickly customize and tune these policies.

Using SSH/SCP(5) as well as REST(6), which are broadly used as standards, this software functions as a network device control interface and is able to collect and analyze the status of a variety of network devices and the traffic volume per port. It also enables control of such things as network line switch over and switch back.

3. Simulator that can test scenarios without preparing actual devices during testing

By using the simulator function, users can test the workflows they create in a virtual environment, even when it is difficult to prepare the system and the actual devices to be controlled, leading to reductions in time and cost compared to testing on actual devices.

Use Cases for Virtuora SP

When a network experiences a fault, it switches from the operating network line to a standby network line, and then back after the fault is repaired. Virtuora SP defines these tasks as policies, enabling automatic operation. In addition, it is possible to set the switch back to occur at night when communication data volume is low, or to set a threshold for data volume levels when the network is switched to prevent problems. In this way, tasks that had been performed by a dedicated manager can be automated. 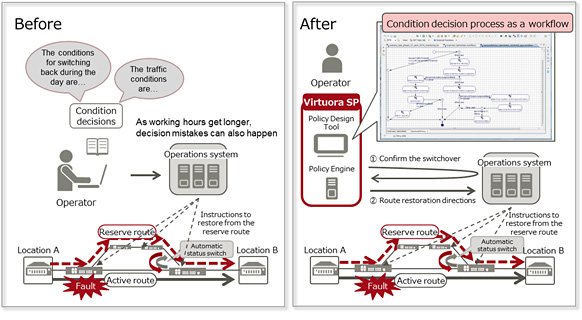 Automation of the switchover from active to standby network route when a fault occurs, and of the switch back
Larger View (160 KB)