Tokyo Institute of Technology and Fujitsu Laboratories Ltd. today announced that, in an effort to further enlarge the capacity of wireless equipment, they have developed a CMOS wireless transceiver chip that can process signals at high speeds with little loss across a broad range of frequencies, from 72 to 100 gigahertz (GHz). They also developed technology to modularize it. With these developments, they succeeded in achieving wireless transmission speeds of 56 Gigabits per second (Gbps), the world's fastest.

In recent years, to cope with the large increase in data traffic resulting from the widespread use of smartphones and other devices, networks that link base stations use optical fiber. One issue with this approach, however, is that it is difficult to expand service in areas where it is difficult to install a network of optical fiber cables, such as in urban areas or areas surrounded by rivers or mountains. To deal with this issue, Tokyo Institute of Technology and Fujitsu Laboratories have now developed high-speed wireless transceiver technologies that use the millimeter-waveband (30-300 GHz), where there are few competing wireless applications, and which are capable of large-capacity communications.

This technology makes it possible to have high-capacity wireless communications equipment that can be installed outdoors in applications where fiber-optic networks would be difficult to lay.

The details of this technology will be announced at the IEEE International Solid-State Circuits Conference 2016 (ISSCC 2016), the largest conference related to semiconductor technology, opening in San Francisco on January 31 (ISSCC Presentation Number 13.3).

With sharp increases in data communications traffic resulting from the proliferation of smartphones, the expansion in the capacity of backbone networks - which connect wireless base stations to core networks, and base stations to each other - is accelerating. In the past, macro-cell base stations were mainly used, each of which can cover an area with several kilometers of range, but in recent years these have been supplemented with large quantities of small-cell base stations, each of which has a range of only a few hundred meters, to accommodate the increase in communications traffic.

Also, fiber-optic lines, which can transmit large volumes of data, are currently the most common way to handle communications between base stations. But laying new fiber-optic cables can be difficult in tightly packed urban areas, or in places hemmed in by mountains or rivers, so it has been hoped that high-capacity wireless equipment could be created that can easily be installed outdoors.

The newly developed CMOS wireless transceiver chip and the wireless module that includes it (Figure 1) are comprised of two key technologies. 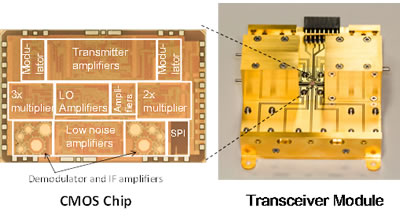 Tokyo Institute of Technology developed a technology for broadband, low-loss transceiver circuits in which data signals are split in two, with each converted to different frequency ranges, and then recombined (Figure 2). Each signal is modulated into a band 10-GHz wide, with the low-band occupying the 72-82 GHz range, and the high-band occupying the 89-99 GHz range. This technology enables modulation on an ultra-wideband signal of 20 GHz, with low noise and a similar range in the ratio between input and output power as existing 10 GHz band methods, which results in high-quality signal transmissions.

Tokyo Institute of Technology also developed an amplifier to send and receive as radio waves signals converted to the millimeter-waveband. The ultra-wideband amplifier for 72 to 100 GHz was designed with circuit technologies that stabilize the amplification ratio by feeding the amplitude of the output signal back to the input side for signal components whose amplification ratio decreases based on frequency.

The signal converted to the millimeter-waveband by the semiconductor chip is transported over the circuit board's signal path and supplied to the antenna. Because the antenna is made out of a waveguide (a metallic cylinder), there needs to be an ultra-wideband, low-loss connection between the printed circuit board and the waveguide. Fujitsu Laboratories and Tokyo Institute of Technology developed an interface between the circuit board and waveguide that uses a specially designed pattern of interconnects on the printed circuit board to adjust the impedance for the ultra-wideband range, enabling loss in the desired frequency range to be greatly reduced.

Indoor data-transfer tests were conducted, with two modules facing each other separated by a distance of 10 cm. These tests achieved data-transfer rates of 56 Gbps, the fastest wireless transmission speeds in the world, with loss of maximum 10% between the waveguide and circuit board.

By combining the technologies developed in this project with high-output amplifier technology, used to amplify the signal and increase the transport range, and baseband-circuit technology, used to process ultra-wideband signals, it is possible to increase the capacity of wireless equipment that can be installed outdoors. By doing so, even in places where new fiber-optic lines are difficult to install, such as urban areas and places surrounded by mountains or rivers, a high-capacity wireless base station network can be deployed, thereby contributing to the provision of a comfortable communications environment in those places.

Fujitsu Laboratories aims to have a commercial implementation of wireless trunk lines for cellular base stations around 2020.

About Tokyo Institute of Technology

Tokyo Institute of Technology stands at the forefront of research and higher education as the leading university for science and technology in Japan. Tokyo Tech researchers excel in a variety of fields, such as material science, biology, computer science and physics. Founded in 1881, Tokyo Tech has grown to host 10,000 undergraduate and graduate students who become principled leaders of their fields and some of the most sought-after scientists and engineers at top companies. Embodying the Japanese philosophy of monotsukuri, meaning technical ingenuity and innovation, the Tokyo Tech community strives to make significant contributions to society through high-impact research. Please see http://www.titech.ac.jp/english/

Center for Public Affairs and Communications