University of Tokyo, Fujitsu, and NEC Succeed in Quantum Key Distribution from Single-Photon Emitter at World-Record Distance of 120 km

Today the Institute for Nano Quantum Information Electronics (Director: Professor Yasuhiko Arakawa), the University of Tokyo, in collaboration with Fujitsu Laboratories Ltd. and NEC Corporation, announced that they have achieved quantum key distribution(1) at a world-record distance of 120 km using a system with a single-photon emitter(2).

These results were generated using an optical fiber quantum key distribution (QKD) system that was newly developed by the three parties. The new system is comprised of two key components. One is a high-purity quantum dot(3) single-photon emitter operating in the 1.5μm band, which reduces the occurrence of simultaneous multi-photon emissions, one of the major limiting factors for long-distance QKD, to one in a million. The other is an optical-fiber-based QKD system optimized for use with single-photon emitters by employing superconducting single-photon detectors(4) with ultra-low-noise characteristics. This single-photon QKD system, which simplifies system operations and management, has now achieved a transmission distance of 120 km. It is expected that this system will bring significant momentum to achieving secure communications that are impossible to eavesdrop on and that cover major metropolitan areas.

The first report on these results was published online on the website of the journal Scientific Reports on September 25.

This research and development effort has been carried out under the program for the "Formation of Innovation Center for Fusion of Advanced Technologies" as part of the Project for Developing Innovation Systems of the Ministry of Education, Culture, Sports, Science and Technology (MEXT).

QKD is a technology that uses individual photons (i.e. particles of light) to convey information, enabling two parties to share a cryptographic key. If an eavesdropper tries to steal the key information on the transmission line, it results in changes to the states of the photons in accordance with the basic principles of quantum mechanics. Since any eavesdropping can therefore be detected, it enables completely secure communications.

In QKD, a device known as a single-photon emitter is required to generate photons one at a time. Until now, however, most QKD systems have used attenuated laser light as a pseudo single-photon emitter. But with pseudo single-photon emitters, there is a high probability that they will emit two or more photons in a single pulse, meaning that the risk that an eavesdropper will steal key information from a portion of the multiple photons cannot be eliminated. To address this problem, one widely used method to detect eavesdropping is to artificially mix optical pulses with different intensities (decoy states). With this method, however, both the transmitter setup and the key extraction process become complicated, and the other problem occurs that excessive attention is required in managing and operating the system in order to maintain security.

If the pseudo single-photon emitter can be replaced with a true one, the setup of a QKD system can be greatly simplified, so that the high level of security guaranteed by the laws of quantum mechanics can be attained. In conventional QKD systems with quantum dot single-photon emitters, however, there are two problems. One is the high probability of generating unwanted multiple photons from a single-photon emitter. The other is high background noise when detecting single photons by using semiconductor detectors. Because of the impact of these two problems, even when using the 1.5μm band, which is advantageous for long distance transmissions, the maximum distance for secure key distribution was limited to 50 km. Therefore, to create a practical QKD system using a single-photon emitter, performance improvements were needed, both in the light source and on the system side.

The collaboration involving the University of Tokyo, Fujitsu Laboratories, and NEC has now developed an optical fiber QKD system comprised of two key components. One is a high-purity quantum dot single-photon emitter operating in the 1.5μm band, which reduces the occurrence of simultaneous multi-photon emissions, one of the major limiting factors for long-distance QKD, to one in a million. The other is an optical-fiber-based QKD system optimized for use with single-photon emitters by employing superconducting single-photon detectors with ultra-low-noise characteristics. Using this system with a single-photon emitter, the partners have verified secure key distribution at a world-record distance of 120 km, twice the previous longest distance (figure 1). This success was primarily based on the development of the following two technologies:

Single photons in the 1.5μm band are generated by illuminating (exciting) a quantum dot placed in a so-called "optical horn structure"(5). The wavelength of the excitation pulse is tuned to the appropriate energy level of a quantum dot (figure 2). If the time duration of the excitation pulse is long, there is a greater chance of two or more photons being emitted per each excitation. This time, however, using dispersion-compensation technology, the temporal width of the illuminating light was compressed, so as to obtain shorter excitation pulses (see the yellow part of figure 3). By doing so, the probability of emitting multiple photons per one pulse was reduced to one in a million, resulting in the successful creation of a high-purity single-photon emitter having the world's highest performance.

Using a low-loss interference system optimized to a communications-wavelength band single-photon emitter that uses a planar lightwave circuit as a platform, which has good practicality proven in operation in the Tokyo QKD Network(6), the researchers built a practical single-photon QKD system that is insensitive to changes in temperature or tensile force that exist in actual optical fiber networks. In addition, by using a new superconducting single-photon detector with ultra-low-noise properties, they created a long-distance QKD system (figure 4).

Based on these results, the researchers will work on making the single-photon QKD system more compact and faster, with the aim of rolling out from 2020 highly secure communications for major urban centers. 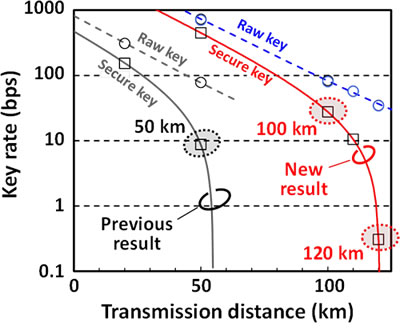 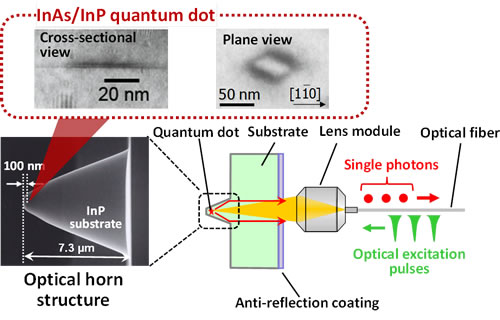 Figure 2. Electron microscope image of the optical horn structure with InAs quantum dot, and a schematic diagram of single-photon generation by optical excitation

About The University of Tokyo

The University of Tokyo was established in 1877 as the first national university in Japan. As a leading research university, the University of Tokyo offers courses in essentially all academic disciplines at both undergraduate and graduate levels and conducts research across the full spectrum of academic activity. The university aims to provide its students with a rich and varied academic environment that ensures opportunities for both intellectual development and the acquisition of professional knowledge and skills.
The University of Tokyo is known for the excellence of its faculty and students and ever since its foundation many of its graduates have gone on to become leaders in government, business, and the academic world. For more information, please see: http://www.u-tokyo.ac.jp/index_e.html.

NEC Corporation is a leader in the integration of IT and network technologies that benefit businesses and people around the world. By providing a combination of products and solutions that cross utilize the company's experience and global resources, NEC's advanced technologies meet the complex and ever-changing needs of its customers. NEC brings more than 100 years of expertise in technological innovation to empower people, businesses and society. For more information, visit NEC at http://www.nec.com.

Based on its Mid-term Management Plan 2015, the NEC Group globally provides "Solutions for Society" that promote the safety, security, efficiency and equality of society. Under the company's corporate message of "Orchestrating a brighter world," NEC aims to help solve a wide range of challenging issues and to create new social value for the changing world of tomorrow. For more information, please visit http://www.nec.com/en/global/about/solutionsforsociety/message.html.