Fujitsu Laboratories Ltd. today announced the development of technology that doubles the maximum distance of optical communications between servers to 200 meters while using conventional fiber-optic cabling.

In a distributed-computing system, adding servers is a way to increase the system's overall processing capacity. However, as the floor space of datacenters gets bigger to accommodate more servers, a point of concern has been lengthening the optical communications paths that connect the servers.

The fiber-optic cables that are commonly used for inter-server optical communications suffer from a phenomenon called modal dispersion(1), by which the high-speed characteristics of the optical waveform deteriorate, and this limits the maximum distance the optical signal can reach. Fujitsu has developed a new optical transmitter structure to reduce modal dispersion, which has been demonstrated to double the maximum transmission distance over existing fiber-optic cables.

From a floor space estimation, this has the potential to connect four times as many servers at the maximum, increasing distributed-computing performance in large-scale datacenters.

Details of this technology are being presented at the 41st European Conference on Optical Communication (ECOC 2015), opening September 27 in Valencia, Spain.

Along with increasing datacenter processing capacity, the distances that communications between servers will cover also increases. Because it is increasingly difficult for servers to communicate over long distances using only electrical communications, optical interconnects(2) have the potential to increase communications speed and bandwidth. Optical interconnect requires an optical transceiver, which converts a high-speed electrical signal into an optical signal at the entrance into a fiber-optic cable. Optical transceivers in use today allow for transmission rates as fast as 25 Gbps.

The fiber-optic cables generally used to connect servers are called multimode fibers, and transmit data at speeds of 25 Gbps a maximum distance of about 100 meters. When using multimode fibers, an optical signal is split into multiple paths called propagation modes(3) and transmitted in the optical fiber. The transmitted optical signals in each propagation mode are combined at the receiver-side of the optical fiber and an output optical signal is created, but the high-speed characteristics of output optical signal degrade over longer distances due to the different speeds in different propagation modes. This phenomenon is called modal dispersion (Figure 1). To cover more distance, modal dispersion must be reduced. Special optical fibers that reduce modal dispersion have been developed, but are approximately 50% more expensive than ordinary multimode fibers, and using them would require switching out existing cabling.

Fujitsu has developed technology that reduces modal dispersion in existing multimode fibers by inserting an intermediary optical waveguide between the lens and optical fiber to transmit the optical signal.

The results of analysis using this technology show that inserting an intermediary optical waveguide with a core width of 25 μm, or half the width of the core in a multimode fiber that an optical signal passes through, has the effect of suppressing the transmission in low-speed propagation modes (propagation mode 3 in Figure 1) and reducing the modal dispersion (Figure 2).

Based on the modal dispersion analysis, Fujitsu devised an optical transmitter with an intermediary optical waveguide having a core width of 25 μm (Figure 3). As a result of fabricating the prototype optical transmitter, the company was able to confirm that, even when used with conventional multimode fiber, at transmission rates of 25 Gbps, it doubled the maximum transmission distance to 200 meters. 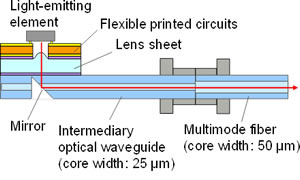 The technology developed by Fujitsu was confirmed to double the maximum distance that optical communications can cover, which would enable the number of servers that could be connected together to increase by up to four times. This increases distributed processing capacity among servers in a large-scale datacenter.

Fujitsu Laboratories is working to produce a miniaturized optical transceiver implementing this technology, with the goal of a practical implementation during fiscal 2017.