The Fujitsu Social Mathematics Joint Research Unit(1) within the Institute of Mathematics for Industry(2) at Kyushu University, Fukuoka Airport Building Co., Ltd., and Fujitsu Laboratories Ltd. today announced the start of field trials at Fukuoka Airport intended to raise passenger satisfaction by applying mathematical technologies to the issues that affect people's state of mind when they face congestion, which lowers comfort and safety.

In recent years Fukuoka Airport has been witness to an increase in passenger numbers against the backdrop of a sharp rise in foreign visitors to Japan. The airport's international terminal, in particular, has seen a marked increase in activity. As a result, the facilities have become increasingly crowded with longer passenger wait times, leading to an urgent need to design a new policy to prevent passenger discomfort and stress. However, as passenger satisfaction is not only affected by facilities and equipment, but also by airport staff as well as the complicated human factors of the passengers themselves, there was a need to use the trial-and-error method based on actual airport experience to frame an effective policy. Mathematical technologies, such as simulations, are expected to play an important role in improving this situation, but there have been difficulties in implementing them due to various social issues involving human factors. These include issues that need to be resolved between mathematics researchers and on-site decision-makers and the difficulty of reaching a shared understanding of the significance of the use of mathematical technologies.

Now, researchers from Kyushu University's Fujitsu Social Mathematics Joint Research Unit and Fukuoka Airport Building's staff are collaborating on efforts to discover issues on the ground and to resolve Fukuoka Airport's issues. As a first task, they will build a simulation of the congestion that occurs in international procedures facilities, an urgent issue, then carry out detailed on-site data collection, and conduct trials to test policy effectiveness.

Further details of these efforts will be announced by Kyushu University at the 2015 Fall National Conference of Operations Research Society of Japan, to be held starting September 10th at Kyushu Institute of Technology's Tobata campus.

Because of the rise in the number of foreign visitors to Japan, thanks to such factors as the cheap yen, the lowering of visa restrictions for countries in Southeast Asia, and the rise of low-cost carriers, the number of passengers at Fukuoka Airport has been increasing for several years, creating congestion in the airport's procedural facilities and shops. As there is the possibility of a decrease in passenger satisfaction due to this congestion, there was an urgent need to study new policies that take passenger movement and staff operations into consideration. 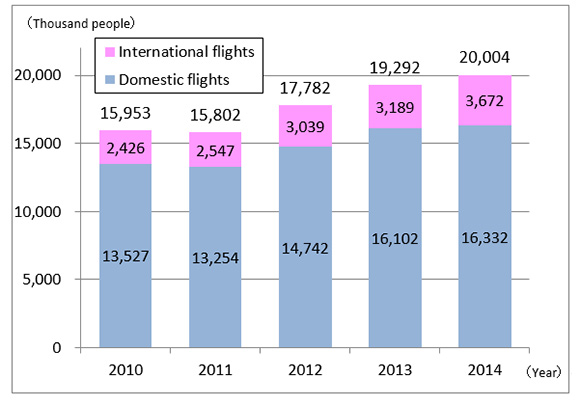 Due to the fact that a number of the issues affecting passenger satisfaction involve the psychology of passengers and staff, it has been difficult to assess the effectiveness of policies, and there was a need to use the trial-and-error method based on actual airport experience. While there are expectations that the use of mathematical technologies can help improve the situation, there is a gap between mathematics researchers and the decision-makers on the ground in their understanding of the issues and technologies. Therefore, even if sophisticated technologies were developed, they would not be accepted in the airport. In order for mathematics researchers to make a contribution in the field, they need to cooperate with the relevant people in the airport and develop technology while sharing understanding with each other.

Summary of the Field Trials

Kyushu University's Social Mathematics Joint Research Unit and Fukuoka Airport Building will carry out joint field work at Fukuoka Airport to clarify the issues that need to be resolved with respect to human psychology, comfort, and safety. Furthermore, they will develop mathematical technologies to implement policies to resolve these issues, as well as test the efficacy of these technologies using real data from the field.

Because using a mathematical model makes it possible to have a numerical understanding of policy effectiveness, it becomes possible to have persuasive policy discussions between many airport-related businesses, including airlines and security companies. Moreover, through this effort, mathematics researchers will begin to understand the methodologies involved in creating mathematical technologies that will take root in real-world situations.

In accordance with the following topics, Kyushu University's Fujitsu Social Mathematics Joint Research Unit and Fujitsu Laboratories will develop and evaluate mathematical technologies based on human psychology and behavior, while Fukuoka Airport Building will implement and evaluate policies aimed at raising passenger satisfaction.

Since its foundation in 1911, Kyushu University has become one of the leading universities in Japan. The University is comprised of 11 undergraduate schools, 18 graduate schools, 17 faculties, 5 research institutes, a University hospital, and a University library, as well as over 50 affiliated research centers. Empowered by our 100-years of tradition and experience, we are keen and ready to tackle whatever challenges we must face. For more information, please see: http://www.kyushu-u.ac.jp/english/index.php.

Fukuoka Airport Building Co., Ltd. was established in April 1967 by the City and Prefecture of Fukuoka, the business community of Kyushu and airline companies, commissioned to construct and operate the terminal buildings at Fukuoka Airport. Ever since, we have undertaken the construction, expansion and renovation of the terminal buildings and enhanced the facilities to meet the increasing aviation demands during the high economic growth period. In recent years, a new international passenger terminal and an international cargo terminal were completed in May 1999, and the former international terminal was renovated exclusively for domestic flights, having started operation as Terminal 3 building in July 2000. For more information, please see: http://www.fuk-ab.co.jp/english/.

Institute of Mathematics for Industry