When accessing remote file-sharing servers in the cloud, slow upload and download speeds for typical file-sharing systems due to network latency has been an issue.

By using a newly developed software that relays communications between the client and server, the number of communications made has been significantly reduced, lowering the effects of network latency. This communication frequency occurs when obtaining information on multiple file names and file sizes on a remote network. In an internal experiment, file transfers were confirmed to be up to ten times faster when dealing with multiple small files. Transfers of large files can be up to twenty times faster when combined with the deduplication technology(1) Fujitsu Laboratories announced last year.

By simply installing this software on a client and server, increased speeds for file access for existing file-sharing systems can be achieved.

In file sharing, files are stored on server connected to a network and multiple clients can share the same files. This is used by enterprises to share information and manage documents. Previously, Individual locations have maintained their own file-sharing servers on-site, but in order to improve security and reduce operating costs through combined management, server consolidation has become more common as have opportunities to remotely access file-sharing servers.

With two network file-sharing protocols that are widely used in file-sharing systems, CIFS and SMB(2), the effects of network latency can impose significant wait times for accessing files, creating a demand for improving speed.

Fujitsu Laboratories has already developed a deduplication technology for use with remote data transfers, which accelerates the process by avoiding retransmissions of previously sent data. This technology can be applied to a variety of situations, but it has had limited effectiveness with the CIFS and SMB file-sharing protocols because of their unique processes. Improving networks and installing specialized hardware are other ways of increasing speeds, but these are expensive, and installation of specialized hardware has limited effectiveness when handling large numbers of small files only a few kilobytes in size.

The CIFS and SMB file-sharing protocols have the following unique processes and challenges. 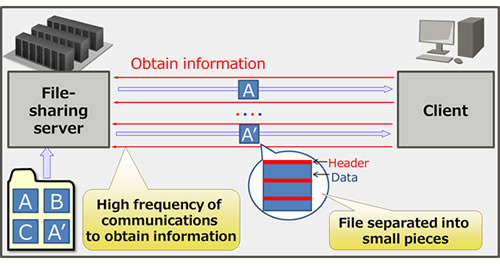 Fujitsu Laboratories has developed a technology that accelerates data transfers for file-sharing servers using only software. Key features of the technology are as follows.

With this technology, a module is installed on both the client and server that accelerates data transfers (Figure 2).

In this way, the amount of communications generated by obtaining file attributes, such as multiple file names and file sizes, is greatly reduced, as are the delays influenced by network latency.

2. Effective deduplication due to header separation

Fujitsu Laboratories developed a technology that works on the server-side module to separate the transmitted data into the headers and the contents of file. This makes deduplication of retransmitted data more precise, leading to more effective network traffic reduction.

Figure 2: Overview of the new technology

In Fujitsu Laboratories' internal experiment, software that implements this technology was found to have the following effects.

This technology is implemented as software and can be installed on existing file-sharing systems. It can also be applied to cloud and server-virtualization environments, mobile devices, etc., and can be extended to a variety of network services. This technology enables more efficient file sharing and joint development between remote locations.

Fujitsu Laboratories plans to implement this technology into a product as a function for a WAN optimization solution during fiscal 2015, after internal testing at Fujitsu.