Fujitsu Laboratories Ltd. today announced that, in preparation for the next-generation mobile communications 5G system, it has achieved multiple access by multiplexing millimeter-wave beams. This technology will enable simultaneous high-capacity communications for multiple users while minimizing reductions in communications speeds.

In the past, when large numbers of users communicated at the same time, because their emitted radio waves would interfere with each other, there was a need to partition time and frequencies, which resulted in the problem of slower communications speeds. Now, in the 60 GHz millimeter-wave band, Fujitsu developed a technology that reduces radio waves that were generated outside of the targeted direction during beam formation using array antennas that consisted of multiple aligned antenna elements, to one fifth the conventional amount.

With the developed technology, by multiplexing narrow radio-wave beams, many users are able to communicate without interfering with each other, and reductions in speed during times of high-capacity communications are minimized. In internal experimentation, by forming four millimeter-wave beams, Fujitsu was able to achieve 12 Gbps communications speeds, the world's highest level.

Details on the technology will be released at the meeting of the Technical Committee on Short Range Wireless Communications of the Institute of Electronics, Information and Communication Engineers to be held on Monday, June 15, at Fujitsu's Kawasaki facility.

There are several methods to expand the communications capacity per user, including reduction of the radius of the area covered by mobile-phone base stations and Wi-Fi access points to decrease the number of users within a given area, or by applying frequency bandwidths that can use wide bandwidths such as the millimeter-wave band.

With the millimeter-wave band, because the size of the antennas can be reduced, by increasing the number of antenna elements, the space can be partitioned into smaller segments, with the expectation that the radio waves can be transmitted in the direction of the small cells. With previous design methods for antenna arrays, however, because side lobes, which are radio waves that flow in directions other than the targeted direction of the main lobe, are generated when the beams are formed, interference arises among the beams when multiple antenna arrays are used to multiplex users, making it difficult to line up multiple array antennas.

Utilizing the 60 GHz millimeter-wave band, Fujitsu created a 64-patch antenna array prototype that generates a narrow radio-wave beam with small side lobes (figures 2 and 3). In typical array antennas with a given power density, the power ratio between the main lobe and side lobes is about 13 dB. By devising an antenna power-supply circuit that sends more power to antenna elements close to the center and diminishingly less power towards the periphery, Fujitsu achieved small side lobes with a power ratio of approximately 20 dB, an improvement of 7 dB (or one fifth, compared to the conventional amount). 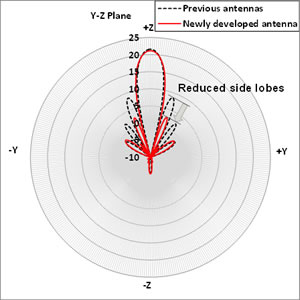 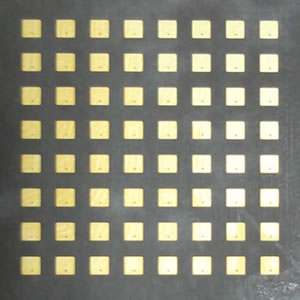 With this technology, by arranging multiple array antennas that each face a slightly different direction, multiple users can simultaneously communicate without interfering with each other.

By using this technology, even if many users concentrate in one location and simultaneously communicate, the reduction of each user's transmission speeds can be minimized, enabling smooth, high-speed communications. This enables the provision of a comfortable communications environment, even when watching high-resolution videos or uploading videos to the cloud.

Fujitsu will increase the speed of millimeter-wave wireless devices and reduce power consumption per bit rate, with the aim of bringing the technology into practical application around 2020.