Fujitsu Laboratories Ltd. today announced its development of the industry's first technology that estimates the number of development work-hours needed to automate systems operations, enabling assessment of the cost effectiveness of such automation work to be generated in a short period of time.

This technology enables easy calculation of cost effectiveness based on the number of development work-hours and the operations task work-hours that will be obviated by automation, so that deployment plans can be devised more quickly and with overall efficacy in mind by, for example, first applying automation to tasks offering the highest cost benefit.

Details of this technology are being presented at the Workshop on Advanced IT Service Management (BDIM 2015), opening May 15 in Ottawa, Canada.

In the process of automatically estimating work-hours based on the descriptions of tasks in an operations manual, estimating the number of operations-task components to be developed can be difficult when there is a single operations-task component mentioned in multiple descriptions of GUI actions, for parameter settings or option selections. This is a factor in amplifying errors when estimating development work-hours for components. With common procedures that could be treated as workflow subroutines, simply converting each common procedure into a subroutine will increase the subroutine calls, and may increase the total volume written. Without the ability to carefully estimate the length of the written workflow, the accuracy of the work-hours estimate will suffer.

Fujitsu has developed technologies that accurately estimate the work-hours needed to develop operations-task components and to generate workflows. Key features of the technologies are as follows: 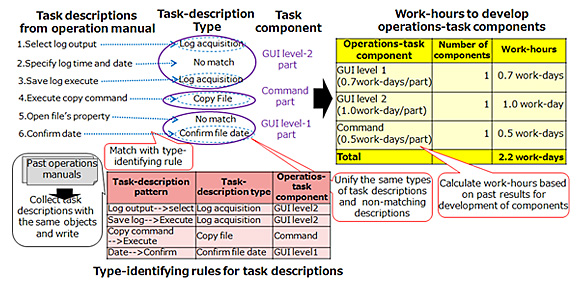 In internal testing of operations on a large-scale system, where there were more than 1,000 candidate tasks for automation, manually estimating the work-hours needed for automation using sampling took one month or more. In contrast, these technologies were able to generate a preliminary estimate of the development work-hours needed for automation in about five days. In addition, when comparing these estimates to the actual hours worked, the average error margin was 7.0% for operational tasks that were primarily command-driven, and 19.3% for GUI-driven tasks, as compared with 65.7% using existing methods.

Calculating the period, to recover investment based on the automation development work, which is the total of the work-hours to develop operations-task components and to develop workflows, and the operational work otherwise done by hand and obviated by automation, shows that the shorter the period, the greater the cost efficiency (Figure 3). This technology makes it possible to systematically deploy automation for the greatest impact by prioritizing automations that have shorter times required to recoup their required investment. 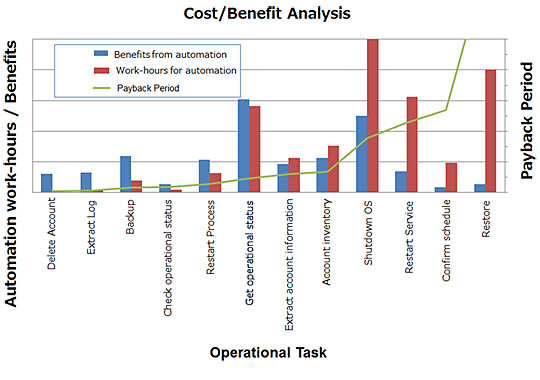 Fujitsu Laboratories plans to continue working to improve the accuracy of estimates, particularly for GUI-driven tasks, with the goal of a practical implementation during fiscal 2015.