Fujitsu today announced that it has developed FUJITSU IoT Solution UBIQUITOUSWARE, an Internet-of-Things package that senses the status of people and things and their surrounding environments and analyzes the data to quickly provide valuable, actionable data tailored to a customer's business.

The package consists of UBIQUITOUSWARE core modules that, in combination with sensors, microcontrollers and wireless communication function to analyze sensing data. These core modules work in tandem with middleware that uses sensors to learn and analyze data in the cloud. Sensing data is analyzed using the Human-Centric Engine, Fujitsu's proprietary algorithms, which convert data into information that customers can put to use quickly, such as fall-detection or body-posture detection.

UBIQUITOUSWARE is available as a package of modules and middleware that is easily installed in existing devices and systems. The first example of a device embedded with UBIQUITOUSWARE is the UBIQUITOUSWARE Head Mounted Display, announced today. Location badges, vital-sign sensing bands, and other products will be rolled out beginning December 2015.

Fujitsu has begun field testing of UBIQUITOUSWARE with customers and is making initiatives toward its deployment within the Fujitsu Group. The results of these efforts will be used to expand its IoT business into a variety of fields.

As the era of the Internet of Things approaches, Fujitsu is pursuing Human-Centric IoT initiatives to help companies develop new and valuable lines of business using a wide range of digital information. Building on the base of its Human-Centric Engine that it has developed through PCs and mobile devices, the company is now offering UBIQUITOUSWARE as the front-end interface for Human-Centric IoT.

Prototypes of new devices with embedded UBIQUITOUSWARE will be exhibited at Fujitsu Forum 2015, running May 14-15 at Tokyo International Forum.

The package consists of UBIQUITOUSWARE core modules, which combine a variety of sensors commonly found in ubiquitous products, such as accelerometers and barometers, custom microcontrollers that directly control the sensors and analyze their data, and wireless communications using Bluetooth Low Energy (BLE, (1)), together with sensor middleware that learns and analyses data in the cloud and that can be used on multiple platforms, including Fujitsu's own IoT platform.

UBIQUITOUSWARE can be easily integrated with a company's existing equipment and systems. In addition, by Fujitsu offering UBIQUITOUSWARE-embedded devices customers will be able achieve fast deployments. Moreover, to support the IoT business transformations of customers, Fujitsu is providing data that customers can use as is from its Human-Centric Engine, which analyzes sensor data using proprietary algorithms Fujitsu has refined through its development of ubiquitous-computing products.

UBIQUITOUSWARE is an IoT package that, in addition to regular BLE beacon tag functionality, enables the acquisition of data from a wide variety of sensors.

1. About the UBIQUITOUSWARE core module

The UBIQUITOUSWARE core module is a module that packages together a collection of sensors (accelerometers, barometers, magnetometers, gyroscopes, and microphones), LSI devices equipped with the Human-Centric Engine, and BLE communications. Companies have the option to include other sensors to meet the needs of their businesses, including pulse sensors and GPS, for example.

2. About the middleware for sensors

1) Sensing middleware
Sensing middleware is middleware with analysis algorithms that detects whether something is in a normal or abnormal state based on data collected from sensing devices that use the UBIQUITOUSWARE core module, such as whether a person is standing or has fallen.

Sample Devices Embedded with UBIQUITOUSWARE (due out starting December 2015)

Prototypes will be demonstrated at Fujitsu Forum.

Features
Badges and tags use pedestrian dead reckoning(2) technology based on Fujitsu's proprietary algorithms to locate people in locations where GPS is hard to use (indoors), and use GPS to locate them outdoors, for precise location monitoring and motion tracking, indoors and out, at low cost. The system can also detect a badge-wearer's posture and whether they have fallen.

Sample Applications
In hospitals, commercial facilities, and warehouses, badges and tags worn by staff, customers, and objects let the wearer's position be tracked in real time. This can be used to reallocate personnel, promote safety by detecting falls in real time, manage goods, reorganize store layouts and product assortments, optimize quantities, and make other decisions.

Prototypes will be demonstrated at Fujitsu Forum.

Features
Information, including temperature, humidity, movements, and pulse, from a sensor worn on the wrist can be used to estimate the wearer's heat stress using the proprietary algorithms in the Human-Centric Engine. It can also monitor rapid changes in barometric pressure and motions that would signal a fall by the wearer.

Sample Applications
Worn by workers in construction, manufacturing, or agriculture, this can be used to estimate heat stress from the surrounding environment, whether the wearer is taking breaks, and health status, to help manage the worker's health. Also, this can be used to detect falls or other accidents, to respond to them more quickly, and to make the workplace safer.

Features
This captures live sounds, including speech, coughs, breathing during sleep, and movements, with the microphone built into the station, and tracks changes in status using Fujitsu's proprietary sound-analysis methods. This also analyzes a person's patterns, which have been learned. The temperature and humidity sensors can estimate heat stress.

Sample Applications
Placed in a residential facility for the elderly, this can be used to detect when residents leave and return, to prevent heatstroke, and to confirm their status and assist with relief in the event of a disaster.

Features
This photographs in real time the pet left home alone, and maintains a pet-activity log. The log is analyzed using Fujitsu's proprietary algorithms to automatically detect changes in the pet's activity levels, and issue alerts in the event of heat stress or dehydration. This helps pet owners look after their pets even when they are away. 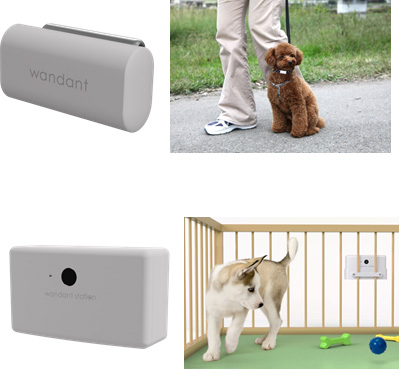 About the Preliminary Field Testing of UBIQUITOUSWARE

Fujitsu is beginning testing in three sectors with companies using UBIQUITOUSWARE, as well as initiatives toward implementation within the Group.

Overview: This will be a joint research project into providing rapid relief and safety monitoring in which farmers will wear vital-sign sensing bands that will detect when a farmer has tipped over on piece of farm equipment and whether the farmer has stood up within a specified time period. If not, the farmer's family or other preset parties will be automatically notified. Testing on vital-sign management for famers is also planned.

Overview: This will be a joint development of an in-hospital service in which patients will wear location badges, and if they need help from a doctor or nurse, will touch a button that sends their location and prompts nearby doctors and nurses. Another joint development will be aimed at improving operational efficiency by applying location tags to equipment so that it can be visually mapped to prevent loss. Another test is underway to provide navigation guidance in the hospital to patients in order to improve hospital services and operational efficiency.

Overview: In this test, field operators working on network construction projects for Fujitsu Network Solutions will wear a vital-sign sensing band that tracks their user ID and detects heat stress, for example, based on their location, acceleration, temperature, and humidity. This operational test designed to bring greater visibility to work locations is to begin this summer, with a full-scale rollout aimed at improving task execution in the field as well as workplace safety.